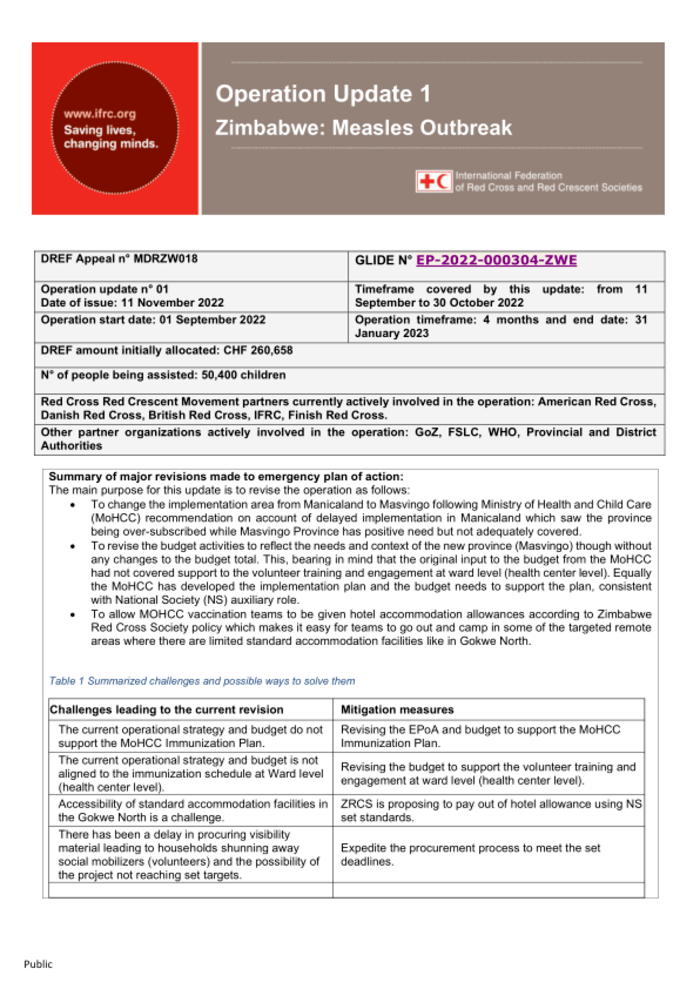 Summary of major revisions to the emergency action plan:

The main purpose of this update is to revise the operation as follows:

• Revise budget activities to reflect the needs and context of the new province (Masvingo) but without any changes to the total budget. This, bearing in mind that the initial contribution to the MoHCC budget did not cover support for training and engagement of volunteers at the service level (health center level). Similarly, the MoHCC has developed the implementation plan and the budget should support the plan, in line with the auxiliary role of the National Society (NS).

• Enable MOHCC vaccination teams to receive hotel accommodation allowances in line with Zimbabwe Red Cross Society policy, allowing teams to easily go out and camp in some of the targeted remote areas where Standard accommodation facilities are limited, as in Gokwe North.

A. ANALYSIS OF THE SITUATION

Description of the disaster

From early April 2022, Zimbabwe was hit by a deadly nationwide outbreak of measles that killed over 750 children in the first 6 months of the outbreak until October 2, 2022. This outbreak raised alarm bells across the country. internationally, with organizations like UNICEF, the Red Cross and the WHO expressing concern. and activating an emergency response strategy to provide support and resources to the Government of Zimbabwe (GoZ). The first case was recorded in Manicaland province on April 10, 2022 in Mutasa district and as of August 31, 639 children had succumbed to the virus, accumulating to 750 deaths by early October. In response, the government of Zimbabwe has launched an emergency national vaccination program targeting 95% of all children aged 6-59 months and in some cases up to 15 years of age, with the aim of achieving herd immunity. . Nationally, reports indicate that in total approximately 85% of all children under five years of age have been fully immunized against measles as of 2 October 2022. Currently, GoZ is intensifying efforts to immunize eligible populations remaining, giving priority to the province of Manicaland. According to the Midlands Province MOHCC, 65% of all children under five are fully immunized against measles by 20 October 2022.

Tracking and posting of measles data to the public by the Department of Health on Twitter was halted in September to minimize public panic. However, vaccinations are underway in all static facilities and outreach teams go to hard-to-reach areas and children in the 6-59 month category are vaccinated regardless of their vaccination status. At least 85% of children have been vaccinated in Manicaland province and of the 7,413 children affected by measles, 5,600 have recovered, representing 76% cure. Countrywide vaccination will continue until all areas are covered as it will continue until it reaches the national vaccination target of 95%.