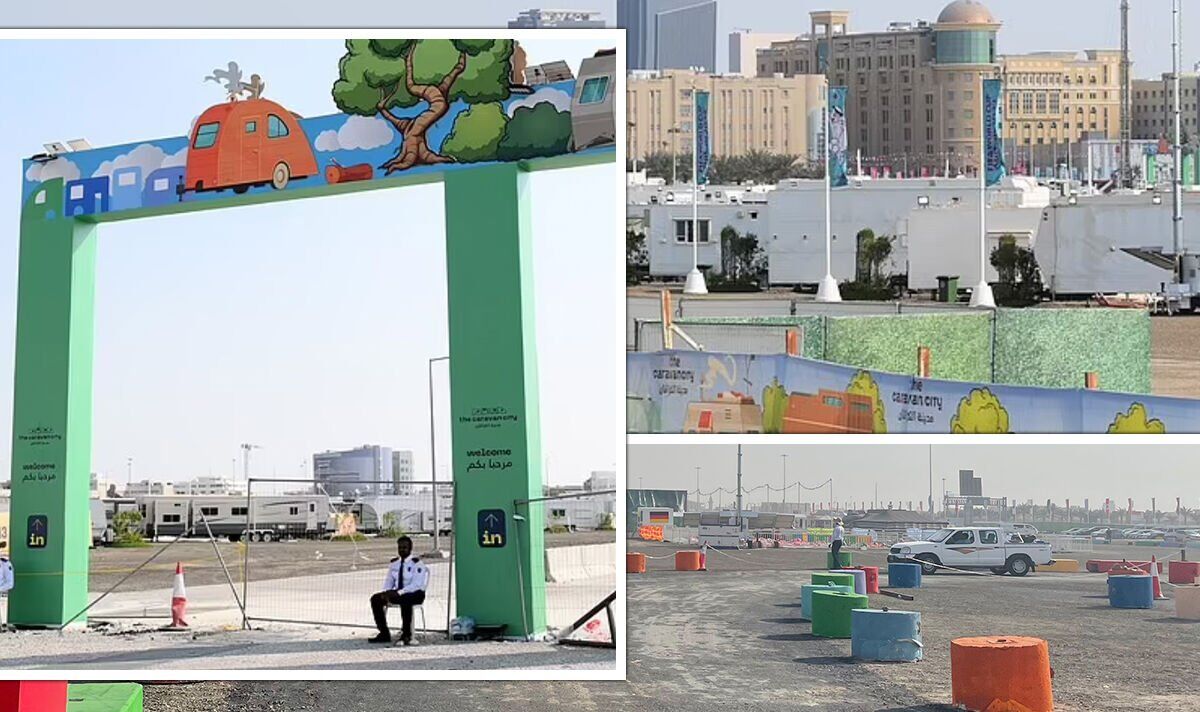 World Cup: A look at the accommodation of Qatar supporters

The camp is close to the Ahmad Bin Ali Stadium, where England and Wales will play next Tuesday. The images tell the story of a disappointing effort by the Qatari hosts to provide a positive and memorable experience for fans. The experience will be memorable. But not for the right reasons.

On the long drive to Rawdat Al Jahhaniya, it was hard not to feel like traveling to the end of the Earth. There were none of the towering skyscrapers and sprawling malls that Doha is famous for. Not even houses in sight.

It was like entering a deserted land, abandoned before it was finished, with the rubble, trucks and construction sites left behind as the only traces of life left.

It wasn’t quite the post-apocalyptic world of Mad Max, but it felt much more like that than a vibrant fan zone worthy of a 21st century international sporting event.

Almost as soon as I arrived at the fan village, I found myself turned away and asked to leave by security if I didn’t have a reservation.

It just didn’t seem like a way to treat people — to treat fans — who want to have an enjoyable experience. Indeed, it felt more like what you would expect in a prison camp than a fan hosting site.

It’s no surprise to me that fans have already expressed the opinion that it was not at all what they expected, describing it as “hell”, “a nightmare” and “unbearable “.

Some have even gone so far as to compare it to the Fyre Festival scam, where revelers paid hundreds of dollars for luxury accommodations and gourmet cuisine, only to find themselves eating prepackaged sandwiches in emergency tents. .

An Iranian fan insists his room is like a ‘tin can’ having flown in support of his country as they face England in their Group B opener on Monday.

“There’s no room to move and the air conditioning is so noisy you can’t sleep. The bathroom isn’t really a bathroom and you can barely move without falling on the small table or kick the bed.

Fans described the accommodation as ‘a nightmare’ and ‘unbearable’ (Picture: Daily Express)

“That’s not the way to treat visitors to any country. We paid so much money to come here. I’m a businessman, but I’m not rich.

“I spent a lot of money to come here. I expect to be treated much better than that. I’m sorry and I’m angry. Maybe it’s okay for Qataris who are rich and live in luxury houses. For me, it’s not good.”

Fans have previously called the site, which costs around £185 a night, “ridiculous”.

Around 1.2 million visitors are expected in Qatar following the World Cup which has led to a rush to build new accommodation to accommodate fans.

By March this year, around 80% of the country’s 30,000 hotel rooms had been reserved by FIFA for teams, officials and sponsors.

The result? Workers are still racing to prepare venues – and fans are being treated like cattle.

The Fyre Festival was eventually canceled, with some of those behind it facing criminal charges. The Qatar World Cup will not be canceled.

It is also unlikely that anyone in Qatar or FIFA will face fraud charges. But serious questions remain.

Did the Qatari authorities really think that this standard was acceptable? How will this influence perceptions of Qatar in the future?

Major human rights issues can be explained because of cultural and political differences. But basic hospitality should be universal.

It was amazing to see that Qatar did not prioritize the fans, who are the faces of the World Cup and whose event is in fact the real subject.

The campsite was far from all the main attractions in Doha and felt like a dead space. It was a long drive with no visible pedestrians.

If their teams aren’t delivering to the field, it’s hard not to think that many of those who made the trip to the Gulf state won’t have the consolation of nice accommodations either.