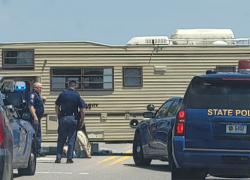 A 49-year-old woman was indicted in Montcalm County District Court Monday after recklessly fleeing Michigan state police in a motorhome on Saturday.

According to Spl./Lt. Michelle Robinson, with the MSP, soldiers from the MSP Lakeview Post responded to the area of ​​M-91 and M-46 on a report of a Winnebago tan driving erratically around 1:34 p.m. on Saturday June 12. The soldiers observed the vehicle pass at least 9 vehicles, to the right, at the stop light from M-91 to M-46 and then ignore the red light.

The soldiers attempted to initiate a traffic stop, but the RV continued west on the M-46 below the posted speeds. The soldiers passed the camper van, believing the driver had not seen their lights, and made eye contact with the “elderly” driver. The driver then passed the soldier’s vehicle and continued west on M-46, then south on Federal Hwy. Due to the safety of people on the roadway, the soldiers turned off their emergency lights and siren, but continued to follow at posted speeds.

The motorhome then turned south on the federal highway. then west on the M-82. At M-82 and Amy School Rd, soldiers attempted to stop the RV using stop sticks. As the recreational vehicle approached the soldier’s patrol vehicle, the recreational vehicle suddenly and aggressively crossed all lanes of traffic and nearly collided with the patrol vehicle. The stop sticks made a positive hit on the front tire on the driver’s side. The RV continued, with a flat front tire, south on US-131 at posted speeds or lower until it exited the eastbound exit onto Cannonsville Road.

The soldiers then positioned themselves in front of the RV as it attempted to turn west on Cannonsville, and the RV knocked over the soldier’s patrol vehicle. The recreational vehicle struck a second patrol vehicle before heading south on US-131 in the northbound lanes. Traffic was blocked due to a previous car fire, and the camper van continued south, attempting to move between the two lanes of traffic and colliding with at least four civilian vehicles. No injuries were reported. The RV then used an intersection and continued to travel south on US-131 in the southbound lanes. The vehicle eventually exited US-131 onto the ramp to 17 Mile Rd. And turned east, at which point the soldiers performed a successful pit maneuver. The two female occupants were then arrested without incident.

Members of the Kent County Sheriff’s Office were responding to assist Michigan State Police at 17 Mile Rd NE and US-131. A deputy driving a fully marked patrol vehicle and a 2011 GMC pickup truck was heading west on 17 Mile Rd NE. The patrol vehicle, with the hazard warning lights on, attempted to overtake the van when it initiated a U-turn, and the two vehicles collided.

The driver of the van sustained minor injuries but refused medical attention at the scene. The deputy suffered minor injuries and was taken to Spectrum Hospital by Life EMS with back and neck pain. According to Sgt. Todd Probst, the assistant was from the Cedar Springs unit, and he’s in pain but fine.

RV driver Linda Marie Mankel, 49, was arrested and detained at Montcalm County Jail. A search of the recreational vehicle uncovered several large electronic items that were allegedly stolen from the Mount Pleasant Walmart.

Anyone who was in these areas during this time and who suffered damage to their vehicle by the RV is asked to contact the Cpr. Lewis at MSP Lakeview Post at 989-352-8444.