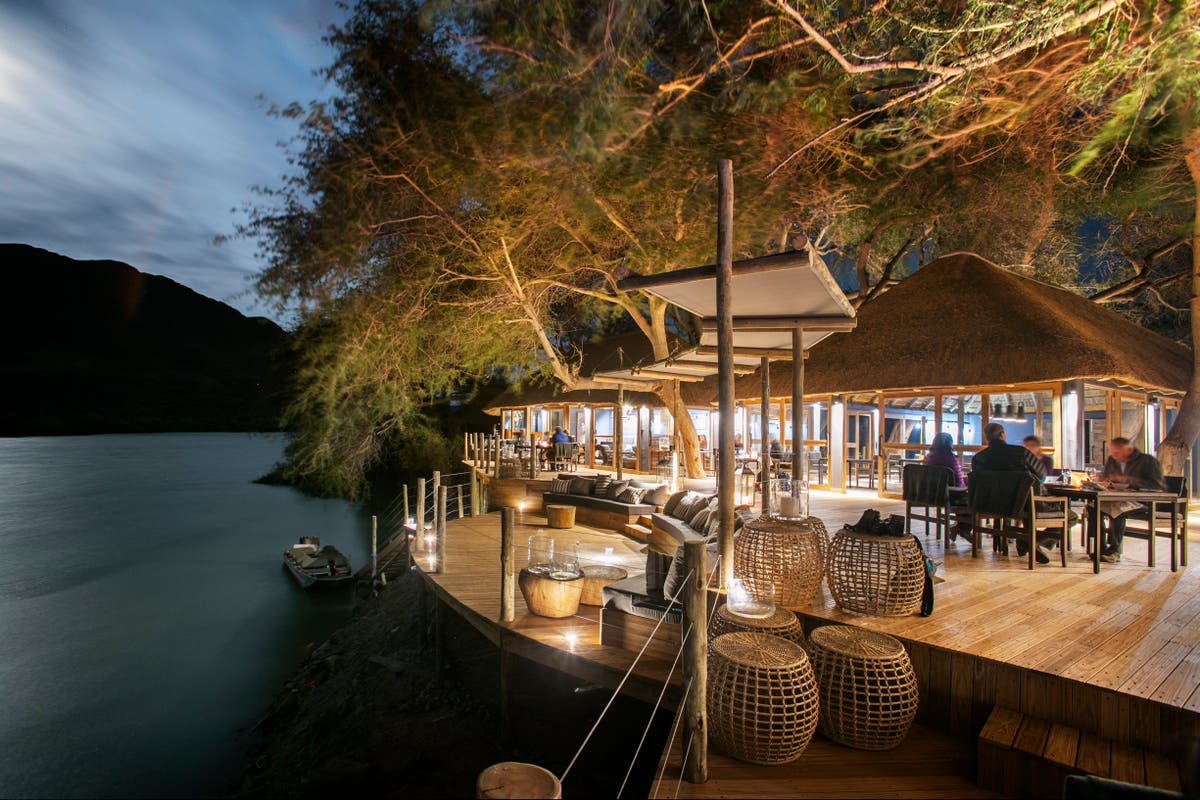 Amoebia call home the land God created in wrath and the place of the great drought, and while neither term sounds like a particularly alluring vacation destination, both are rather apt descriptions.

Compared to the relative luxuriance of its neighbours, Namibia is almost strange in its austerity. Everything is built on a giant scale, but without giants to enjoy. There are dry riverbeds, scrubland that stretches as far as the eye can see and sand dunes surrounded by a halo of orange dust.

It is this desolation that sucks you in. The roads to nowhere, in particular, are hard to resist. Namibia is almost twice the size of France, but its population of just two million lives mostly in Windhoek – and knowing that you could drive for a day in certain directions and not see another human being is both exciting and terrifying. Like someone beautiful but slightly dangerous that your mother would warn you about.

Visitors usually cluster around the Skeleton Coast or the famous Big Daddy sand dune and its twin, Dead Vlei. This is desert drama at its finest: a huge sand dune on one side and a dry bed of sickly tree trunks on the other. It’s extraordinary to watch, but the world knows it – Apple even has an image of Dead Vlei as a screensaver. The last time I was there, three different Instagram influencers were posing against the dead bark, their perfectly manicured feet burying themselves in the sand.

If it’s seclusion you’re looking for, you can still find it – but it’s now mostly in the north, towards the river border with Angola. There, in the province of Himba, the ocher-painted people live nomadic lives totally removed from the modern world, their skin glistening with red dye and their hair braided with the feathers of dead birds. As they walk along the sand dunes from village to village, clad in little more than a loincloth and silhouetted against the scorching sun, it feels like they’ve been sucked inside a National geographic magazine.

The landscape is extraordinary, with undulating sand dunes giving way to dusty ravines. Coming up from Windhoek, we saw gemsbok delicately weaving their way through the vertical ravines, klipspringers and duikers eating the clumps of green grass, and warthogs trotting towards small pools of water. But so far north there is nothing, just an endless expanse of hot, dry land, in a setting so beautiful it looks like art.

And then there is the oasis. In the middle of one of the driest and most inhospitable places on earth, an emerald green jungle appears, snaking through the orange and buttermilk yellow landscape. On either side of the Kunene River – the heavy body of brown water that flows in a thick torrent from the Angolan highlands and divides the two countries – the land becomes exhilarating with life.

Wilderness Safaris’ extraordinary Serra Cafema Camp is located in this brief burst of greenery and is the only lodge in this entire stretch of wilderness, though you can pitch a tent wherever you feel like stopping. Birds of paradise float down to the water, crocodiles bask in the warm sands, and fish eagles soar overhead. God might have created this land in anger, but around the Kunene he was clearly in good spirits.

The camp itself is delicious. Rooms are stylish and airy, with double beds big enough for four, outdoor showers, and candles to take to your private terrace, which overlooks the river. The rapids, which the crocodiles descend and the locals risk their lives to fight and cross to the other side, sound exactly like waves hitting a shore. Sitting on the deck surrounded by reeds and gazing at the moonlit water, I forgot that I was not by the sea.

There is a magic in the air of this part of Namibia that could have clouded my mind. Fairy circles mark the earth and theories abound as to their origin. Some are scientific: they are boma marks left by nomads or termites, or a by-product of volcanic heat. Others are more fantastic – and more tempting. The Himba people think they are signs left by ancestors, the Ovambo tribe think they are real fairy circles, created by local goblins. None of the suggestions make much sense, given that there are very few people this far north and virtually no termites. “Maybe it’s okay not to know,” my guide, Ballak Karutjaiva, says with a smile and a shrug, when I nag him to choose an answer.

Emptiness implies silence, but in Namibia this is not always the case. High in the trees, sociable weavers made huge, messy nests and chattered all day long. Ballack and I walked every morning, and when you’re on foot the bird life is magnified – yellow crested hornbills become almost as enchanting as baby cheetahs. He pointed out the different herbs you can use to stay alive, some to brush your teeth, some to soothe snakebites. Under the canopy of leaves, I felt like I was in the Congo or the Amazon. The only sign that I was in one of the most unforgiving deserts on earth came when I looked down at my knees, hands, and socks, which were still covered in a light film of tangerine-colored sand.

Weeks later, while walking down a street in London, I found a block of sand in my bag and the glowing orange granules looked almost radioactive in the gray northern light. Or magical – like something out of a fairy tale.

Rainbow Towers (020 7666 1260) can offer a nine-night stay combining Windhoek with Little Kulala, Damaraland Camp, Sera Cafema and Desert Rhino from £7795 pp. The price is based on two sharing and includes international and inter-camp flights, transfers, all meals and all activities.