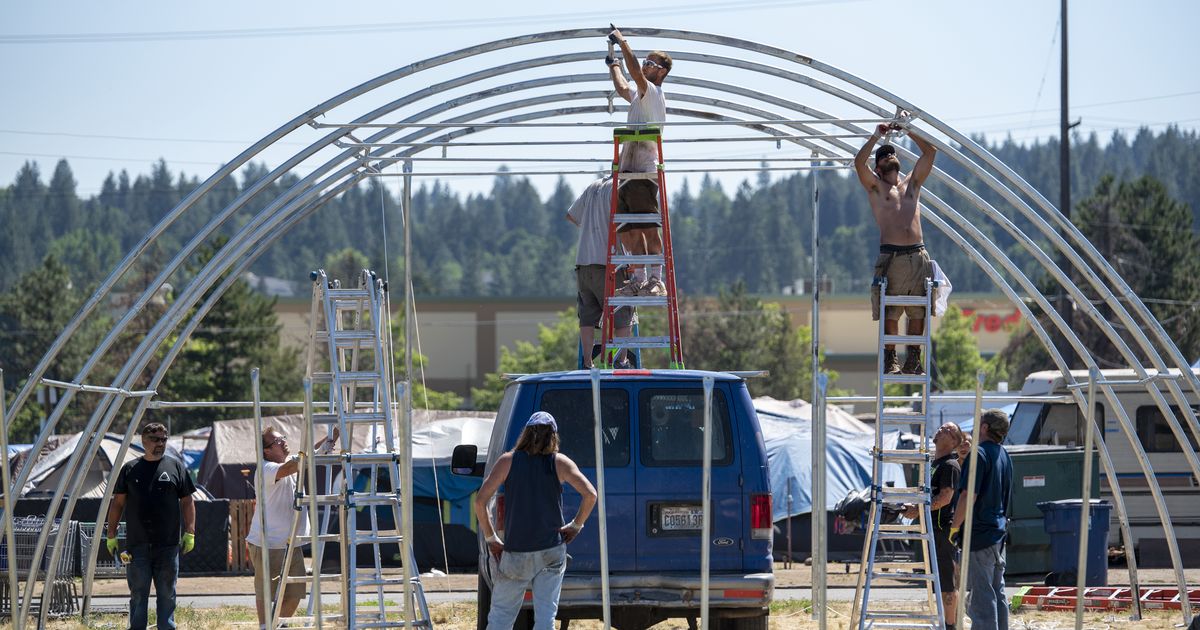 By early Tuesday afternoon, people at the homeless encampment on East Second Avenue and Ray Street in Spokane were building the framework for a large tent intended as a cooling shelter for the hundreds living there.

The tent, like the camp, is located on land owned by the Washington State Department of Transportation. And while the WSDOT doesn’t officially allow it, the state isn’t planning on doing anything to stop it, given this week’s temperature forecast.

Temperatures are expected to reach 100 degrees this week, prompting the National Weather Service to issue an excessive heat warning for the region until 11 p.m. Saturday.

Known as Camp Hope, the encampment has more than 600 people living in tents and vehicles on land near Interstate 90.

Jewels told WSDOT Tuesday morning of the tent, which the nonprofit will run 12 hours a day exclusively for Camp Hope residents. In an email to the Department of Transportation, Garcia said no overnight camping or camping in or around the tent would be allowed.

“That direct sun is what kills you,” Garcia said. “In the shade, at least it’s a bit manageable, but we don’t have enough shade for all these people.

Still, the state has so far allowed campers to stay on site because Spokane doesn’t have enough shelter beds.

With the temperatures as they are, McHale said WSDOT officials would not shut down the cooling tent if that’s what it takes to keep people living in the encampment safe. Even if they did, the WSDOT relied on local law enforcement or code enforcement to combat any illegal activity.

“While we don’t want to allow illegal activity, we also realize that we want to be human in the whole situation,” McHale said. “We don’t want the camp there, but we won’t stop Jewels from implementing rescue measures. We don’t want anyone dying on our property.

Until Saturday, hours are extended at four libraries that will serve as cooling centers. Other organizations, including the Salvation Army Family Resource Center on East Indiana Avenue, also house cooling facilities.

The nearest library to camp, Liberty Park, is about a mile away. The Spokane Transit Authority said people who can’t afford a bus fare can tell the operator which chill center they’re heading to for a free ride – particularly when the day is expected to be late. 95 or higher, users are heading to or leaving cooling centers. may request a fare exception.

This was not expressed directly to camp residents or to Jewels Helping Hands, the nonprofit that oversees the camp, Garcia said.

“If you are going to set up schemes for homeless people, why are we announcing it on the news? Why don’t we tell the service providers about it? said Garcia.

The tent will cost Jewels approximately $21,000 to operate over the next 10 days between staff, security, equipment, setup and tear down.

The non-profit Empire Health Foundation stepped up to provide the necessary funding for the tent. Empire Health president Zeke Smith said the funding came from the president’s discretionary fund, meaning it’s something he says is aligned with the organization’s mission, but doesn’t is not necessarily linked to other initiatives financed by the group.

Smith, concerned about temperatures beyond this week alone, said he hopes to see more local government and community support for the homeless, especially in light of the 20 heat-related deaths in Spokane County during last year’s heat wave.

“It felt like, given the heat that was coming, we had to do something,” Smith said. “I had conversations with people in town to see if they were thinking about where people were and trying to do something about it, and I didn’t hear or see that. would be possible. I had conversations with Julie Garcia, who told me they had a tent and could put it up. I asked for a budget.

Garcia said: “We were going to try to do it without this tent because we didn’t have the funding and people passed out in their tents last night from heat exhaustion. We knew we had to do something. Zeke said he would try to do whatever he could.

While Jewels has two tents, Garcia said the nonprofit currently only has the funding to staff and operate one.

And while the nonprofit has received community support in the form of ice, water, Gatorade and other supplies, Garcia said Jewels could always use more.

“We do what we can, but… Everything that goes into Jewels, this camp eats away at it,” Garcia said. “It would be really nice if people could start writing checks.”

“It’s only going to get progressively worse this week because it’s been hot all week and the heat is building up in there,” she said. “Come on Thursday and Friday, these tents won’t even be habitable.”