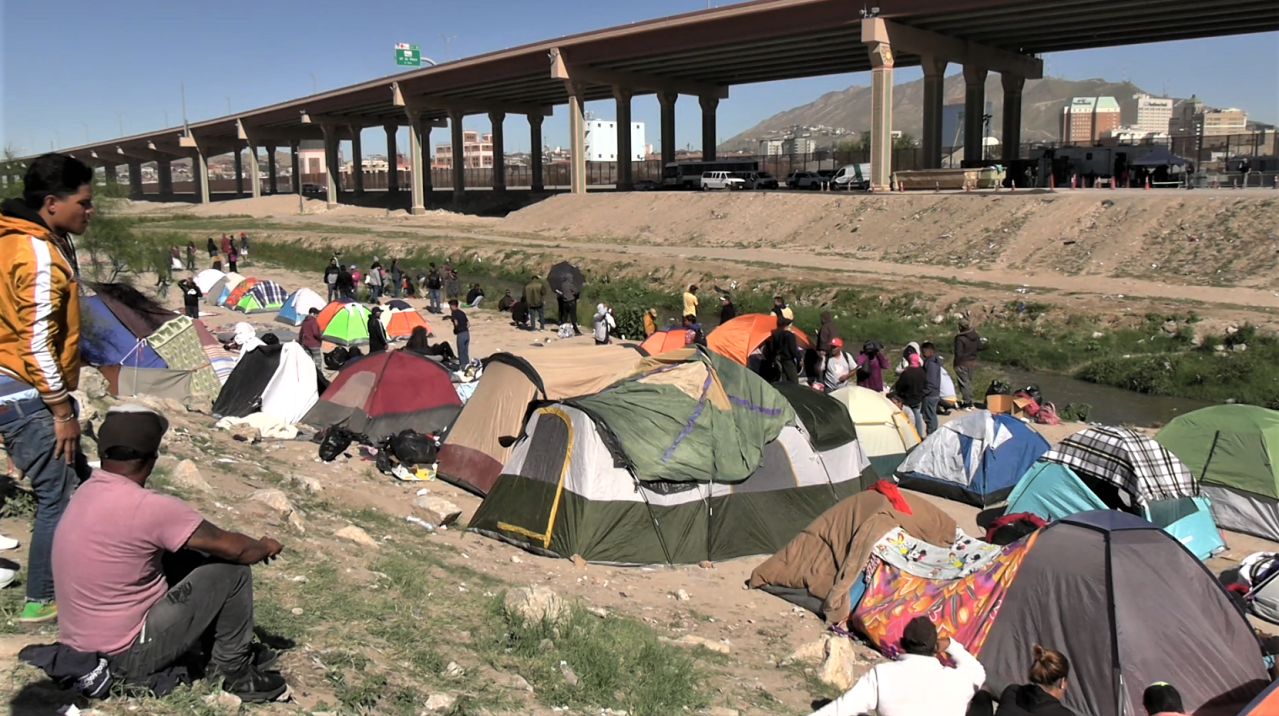 JUAREZ, Mexico (Border Report) — Despite offers of jobs, food and shelter, some 250 Venezuelan migrants are now camping on the Mexican side of the Rio Grande in Juarez.

Migrants began pitching their tents along the seawall on Tuesday night after Juarez officials told them they could no longer sleep on the streets near the Paso del Norte International Bridge and offered to transport them by bus to shelters.

Some of the migrants said they feared being taken into custody and repatriated, while others did not want to be relocated far from the US border. The camp is located directly across from the US Border Patrol West Bridge Temporary Migrant Processing Facility in El Paso, Texas.

“We agreed that the women could go with their children (to shelters), but most of us Venezuelan brothers want to stay here so that the United States and Mexico know [….] that we want to be (there),” said a masked Venezuelan migrant who served as the group’s spokesperson.

The migrants say they are grateful to the residents of Juarez for responding to their plight by providing them with food, clothing and tarpaulins. However, those staying along the Rio Grande said what they don’t want to be is a burden on Mexico. They said what they really want is for the Biden administration to flip-flop on an Oct. 12 decision to deport those crossing the border under the Title 42 public health order.

The Department of Homeland Security is also offering 24,000 Venezuelans the option of seeking asylum remotely.

“I hope they will notice us, listen to us and let us cross one day,” said Stephany, one of the migrants at the camp. In the meantime, she said, “we will continue here, fighting.”

Juarez officials said they are providing accommodation space for Venezuelans out of concern for their health and safety. Nighttime temperatures in the Juarez-El Paso area have recently dropped into the 40s, and authorities fear that children, their parents or single adults in the camp could fall ill.

Visit BorderReport.com for the latest exclusive stories and breaking news on issues along the U.S.-Mexico border

A city official told Border Report that the free rides to the shelters were a goodwill offer and that no migrant would be driven out against their will.

In a statement to Border Report, a U.S. Border Patrol spokesperson said they were aware of the large group of people setting up tents on the Rio Grande in Juarez: “These migrants staged themselves near a low water crossing just south of our Outdoor Processing Site (TOPS) in the Chihuahuita area of ​​El Paso, TX. In coordination with our partners in the Mexican government, we continue to monitor the situation to ensure the safety of all migrants who come into our care.

“The high number … demanded that we maintain an enhanced footprint with TOPS,” the spokesperson said, adding that border officials remain in communication with city and county leaders to ensure joint efforts are maintained. in dealing with the high number of migrants entering illegally. between the entry ports.

“CBP continues to process individuals safely, efficiently and effectively at the border,” the statement said. “The U.S. Border Patrol in the El Paso area continues to deport migrants under Title 42, and those who cannot be deported under Title 42 and who do not have a legal basis for remaining in the States United will be placed in deportation proceedings under the authority of Title 8.”