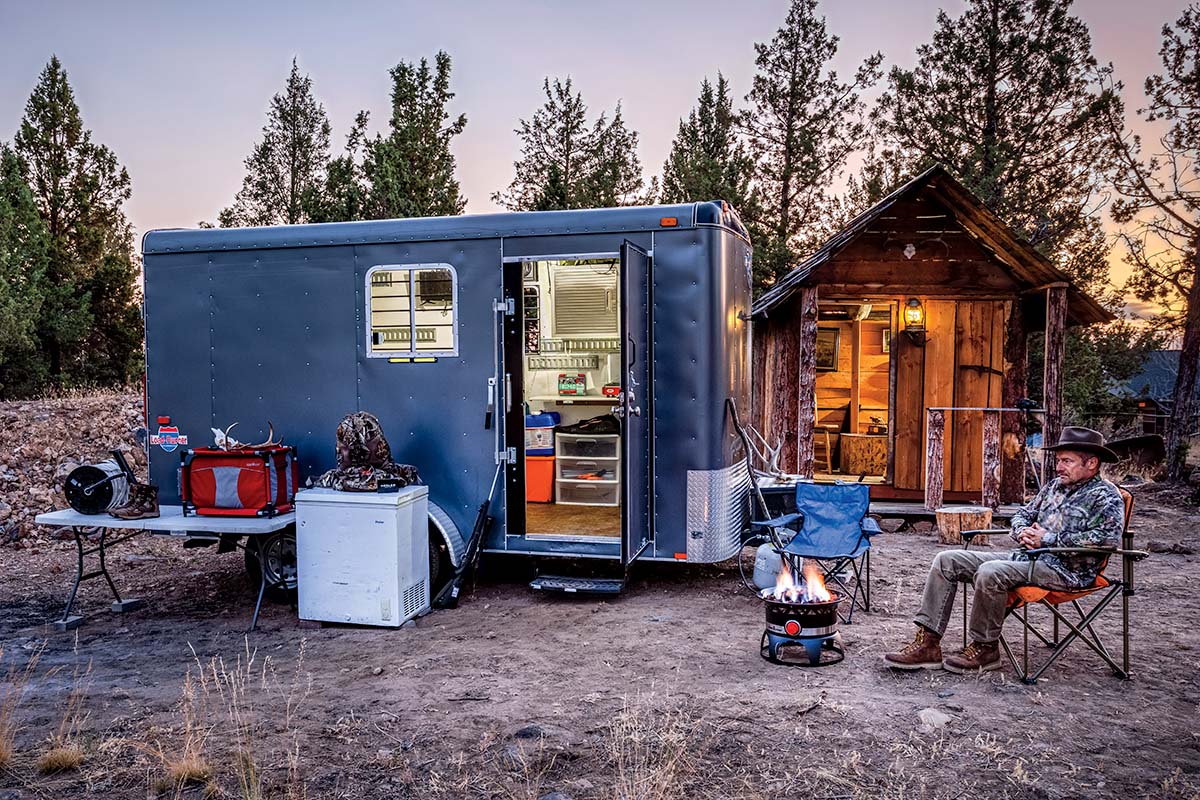 When a backcountry adventure calls, hunters need a secure basecamp. Traditionally, canvas wall tents or nylon outfitting tents, as well as cots, sleeping bags and portable kitchens have served well in these situations.

More recently, some creative adventurers have turned to enclosed cargo trailers, which can be converted into a mobile deer camp with most of the comforts of home. These trailers are blank canvases with four walls and high ceilings, and they can be loaded with everything from balls and beans to sleeping quarters in a self-contained unit that can be locked up and stored in the offseason.

When I started considering using a cargo trailer as a base camp for deer hunting, I realized that a friend of mine was on the road ahead of me. Joe Kiblinger, of Redmond, Oregon, is a die-hard backcountry hunter. The Kiblinger Caravan Camp visits the field for at least two weeks each year, and is most heavily used during spring bear hunts and elk hunts in November.

Cargo trailers come in all sizes. Popular sizes include 5 feet by 8 feet, 6 by 12, 7 by 12, and 7 by 14. Tongue length will add approximately 42 inches. A 6 x 12 enclosed trailer with a single axle will cost around $5,000 new from the dealer, depending on your location and any additional expenses related to material costs and availability issues due to recent supply chain issues caused by the COVID pandemic. The interior width will be 5 feet 9 inches, while the interior height will be 6 feet 3 inches. For towing, calculate a curb weight of 1,200 pounds.

Selecting a trailer is the most important part of the process. Small trailers are light enough to tow with a medium SUV or small truck. But go too small and it won’t sleep everyone in a large group. Go too big and he might not get to a backcountry base camp via a narrow, rocky road. “We tried wall tents and nylon tents,” says Kiblinger. “I had a big toy hauler and only used it twice a year, so we switched to a cargo trailer.”

Kiblinger started with a 7 by 14 cargo trailer and began imagining how to maximize the space to house and feed two to four hunters. Depending on the size of the group, Kiblinger can put two people in bunk beds against the back door and two more in beds along the side wall. Other people solve the sleeping problem by placing beds under work benches.

A hunting trailer can be configured in many different ways, but one of the things people seem to agree on is that a main door on the right or left side of the trailer makes using the trailer more convenient. . If a 4-wheeler is going to be used for hunting, it’s a good idea to have a ramp-style rear door. Otherwise, barn style doors are fine.

Windows let in light and are cheap and easy to install. At night, the lights come on. Most cargo trailers these days are hardwired for LED lighting and the systems are easily tapped into to add task lighting. It’s also very useful to have exterior lighting, which can be mounted on the back of the trailer to illuminate the camp for skinning and cooking chores.

On a week-long trip, deep-cycle batteries will discharge. If a generator is to be used, a hole can be drilled in the ground to pass the extension cord. Mount a power strip to the wall to power a refrigerator, small chest freezer, coffee maker, microwave, and phone/radio chargers. Consider adding a Zamp Solar Obsidian series solar charger instead of a generator to keep the batteries topped up.

During an elk hunt in November, it is quite cold. Kiblinger’s trailer is vented for air circulation and he uses a small portable propane heater to keep it livable. Many trailers are already equipped with a roof vent. Consider upgrading to a Dometic FanTastic 3350 with three-speed fan, automatic dome lift and rain sensor. Carpet scraps are easy insulation to add to retain some heat in the trailer at night.

At a minimum, plan to install wall hanging cabinets. Add friction latches and handles that can be bungee wrapped to prevent doors from opening and spilling contents while riding down a bumpy road. Leave space for wall storage of guns and bows, backpacks and tree stands.

A floor cabinet adds more storage and work space on top. Screw it to the floor and to a support board against the plywood wall. The inclusion of a foldable work table increases versatility. It can be attached to a wall and even stowed away to make room for a cot. Adding leg extensions makes the table taller, which adds space underneath and can make skinning operations smoother.

Kiblinger added a melamine folding dining table that attaches to the wall when not in use. Folding bench seats are also an option. Kiblinger uses a large two-burner Camp Chef propane stove for cooking outdoors, but keeps a small two-burner stove indoors to quickly prepare small meals. It stores a first aid kit, gun cleaning tools, meat processing equipment, towels and dishes all year round inside the trailer.

Of course, camping is synonymous with wide open spaces. Plan to do most of the cooking and eat outside when the weather permits. Kiblinger considered adding an RV awning to the trailer, but instead opted to haul two 10 x 10 pop-up shelters that he ties up with rubber bands. If rain or snow is forecast, he adds tarp walls for weather protection. Most of the cooking is done on the large stove with a griddle for pancakes and bacon.

When it’s time to pack up and head home, all the gear comes inside, the door is locked, and camp is ready to roll. Cargo trailers are available in standard colors including white, black, and gray. Put a wrap on a blank to make it look like a pine forest, or use camouflage detailing and turn it into a cozy stealth hunting blind by adding custom shooting windows on both sides.

Converting a cargo trailer into a hunting camp is a great idea that can be scaled up or down depending on the towing rig. And the only limit to its versatility is your own imagination.