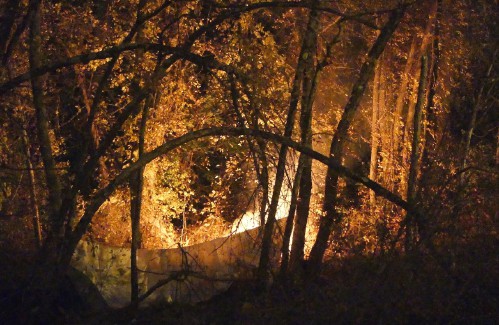 Concord firefighters extinguished an early morning blaze at a homeless camp on Friday, the third fire at a camp in the city this week.

After the Concord Fire Department received a call at 2:21 a.m., Engine 7 arrived in the area at the end of Basin Street along the Merrimack River to find burning tents, according to the department.

With the help of a logging truck, firefighters extinguished the blaze and then assisted two people who had been injured, one nearby and another who had gone to the Speedway gas station on Hall Street, said fire chief Sean Brown.

One person had been burned and the other had been injured while trying to get water to douse the fire. Both were taken to hospital.

Concord Fire also responded to fires at a homeless camp behind Rocky’s Ace Hardware on Loudon Road on Wednesday and Thursday afternoons around 5 p.m. both days.

“Nobody was there,” Brown said. “They were related to cooking or fires to keep people warm.” Temperatures in Concord have dropped into the low 20s overnight this week.

On Wednesday, trash was burning when firefighters arrived and on Thursday they found an unattended campfire, Brown said. Engine 7 responded to all three fires.

City officials recently evacuated a homeless camp near Interstate 93 Exit 13 to prepare for a mixed-use development to be built on the north side of the Merrimack River along Manchester Street.

Which anime is the most relaxing?