The Legacy of COVID-19 on Parks and Public Lands 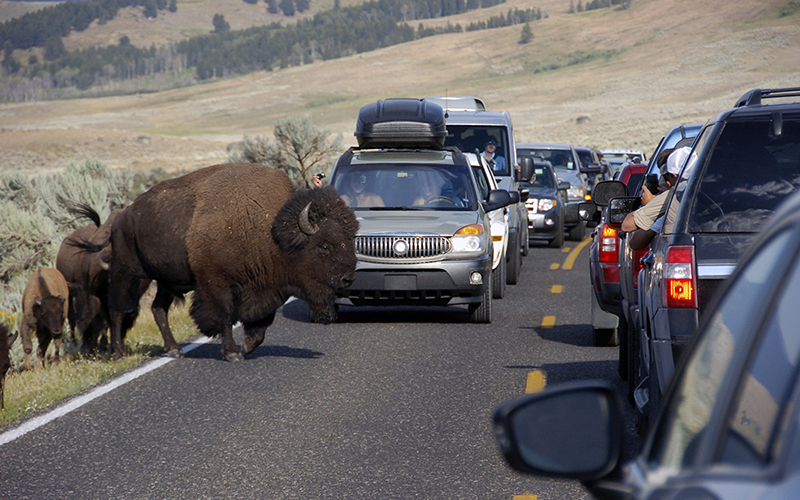 Last summer, lines were starting to form at 3 a.m. on the road to Jenny Lake Campground in Grand Teton National Park. Visitors who hadn’t secured a first-come, first-served campsite the night before waited outside the gates for someone to come out. They lined up well before dawn trying to find a place to sleep in the popular park, dozing in their cars until they spotted an opening. Jenny Lake, with its scenic views of the Tetons, has long been popular, but in the face of COVID-19 the crowds were overwhelming. That’s why last year the park switched to a reservation system for coveted spots.

The National Park Service newly published its figures for 2021, and attendance increased by 60 million visits, or more than 25%, compared to 2020. This is particularly visible in the marquee parks. A quarter of visits were to the eight busiest parks, including the Great Smoky Mountains, Zion and Yellowstone. “The pandemic has exacerbated visitor demand, especially at the more popular parks,” says Jeffrey Olson, director of communications for the NPS Natural Resource Stewardship & Science department, which oversees research at the parks. “Parks near urban areas are under considerable pressure and parks that were already operating at full capacity had additional pressure.”

In many ways, this is great news. Access is crucial for a variety of reasons, and Olson says a big part of the Park Service’s mission is to attract more people. But it also creates tension. Much of our public land infrastructure, from boardwalks to bathrooms, has not been built for the crowded levels of parks and other public places since the COVID-19 pandemic hit the United States two years ago. years. With visitors invading outdated and underfunded systems, sleeping in their cars, and trampling illicit new paths, something had to change.

Kristen Brengel, senior vice president of the National Parks Conservation Association, says it’s one of the biggest problems the National Park Service has ever faced. And it doesn’t stop there: national and local parks also face similar problems. So parks, from the smallest to the largest, are trying to figure out how to distribute crowds and set limits on use. They strive to balance equity and access with experience and ecological integrity, and they try to do this in real time: the crowds are there and the impact is happening.

Parks, from the smallest to the largest, are trying to figure out how to distribute crowds and set limits on use. They strive to balance equity and access with experience and ecological integrity, and they try to do this in real time: the crowds are there and the impact is happening.

Jennifer Newton, social scientist at Grand Teton National Park, says dealing with change starts with quantifying the problem. She is in the midst of three major studies to dig deeper into the socio-economic and recreational context of visitors, but most importantly, she knows the park and that its trails see more people.

“Our official statistics give us a very good idea of ​​visits per year and per month,” she says. In 2021, Grand Teton saw 11% more visitors to the park than its most popular last year, 2018, and she believes the pandemic has underscored the reasons people visit the parks: high gas prices , unstable global economies, stressful situations and the desire to be outdoors, to connect with other people, when many other places are closed.

She says they also see more people visiting during months that were quiet, like March and November. There is no real off-season anymore, and behaviors are also changing. “One of the things I find interesting is that we’re seeing more trail use, as opposed to just visiting,” she says. “Our trail usage is up 29% from 2019 and 49% over five years.”

Olson says this is happening in other parks as well, and unintended consequences are cascading. For example, Grand Teton Chief of Staff Jeremy Barnum said the park has seen startling effects, including an increase in heat exhaustion as visitors wait for crowded shuttles or spend longer than provided outdoors, exposed to the sun and at altitude. Overcrowding also has landscape impacts, such as social trails, jagged ground from illegal parking, and burns from unauthorized campfires. And while land managers are working on studies to identify the worst stressors, they must also act now, because the impacts are unfolding in real time.

First, they try to tell visitors what they can do to reduce crowding through their own decision-making, such as arriving early or late, visiting during less busy times of the year, or considering less crowded parks. popular. Newton says they instituted “Plan your vacation like a rangerwhich highlights under-the-radar NPS sites and encourages intelligent visitor behavior, to try to create realistic expectations.

Olson adds that he told people to visit the parks after dark – “People have a keen interest in the night sky, it’s a really old, old thing of being human, he says – and spread the word about parks that might be less crowded and “We’re trying to point out that there are places where there’s going to be more pressure, so if you’re going to the Smokies or Glacier or Olympic, look at the others parks in the area,” he said. “We lose touch with the vastness of this country, and all the wonderful places to explore, when we sit at home.”

The majority of park visitors come by car, so parking and traffic control can be a tool to regulate crowds in wilder locations. Barnum says they’ve done this in places like Wyoming’s Laurance S. Rockefeller Reservation, where a ranger is stationed to enforce “one car in, one car out.” They found they had to keep staff on to prevent people from parking on vegetation or starting fights. In other places, they’ve allowed what they call predatory parking, where drivers can drive in circles until someone leaves. “In a way, people manage their own experiences,” Barnum says.

Barnum says the NPS has struggled with off-limits camping in recent years, especially when first-come, first-served campgrounds like Jenny Lake fill up. By moving to a reservation system, visitors know in advance whether they have a place or not, and thus have reduced unauthorized camping.

These reservations aren’t always popular, especially with locals, who in the past could plan for a shorter lead time, but Barnum says they’ve had to be clear about expectations and limitations. And it’s not just there, and not just for camping or hiking. Acadia National Park has started taking reservations for morning parking on Cadillac Mountain, the first place in the country that the sun hits each day. And last year, Yosemite instituted $2 reservations to enter the park, within three days. Management says the reservation system may not be permanent, but they are trying to find a way to bring the crowds together.

They also try to spread out the crowds throughout the day. Rocky Mountain National Park has instituted a timed entry program, where visitors register for two-hour entry windows. And this doesn’t just happen in large national parks. Down the Rocky Front Range, Eldorado Canyon State Park, outside of Boulder, Colorado, just instituted timed entry restrictions for next summer. Olson says it helps restore both the visitor experience and worker resilience. “We strongly believe that timed entry permits will help, especially as we try to make staffing decisions, when the most people are around.”

However, limiting crowds does not go that far. Even a few people can create a big impact, so they also had to draw hard lines on where people can go, especially when impacting vulnerable species. In the Tetons, rangers have asked skiers and other winter recreationists to avoid areas that are home to endangered bighorn sheep. It was really difficult decision, because the habitat is also a very popular recreational ground. “We try to strike a balance,” says Newton. “Part of our job is both to preserve resources forever, while another part allows people to have experiences.”

“Part of our job is both to preserve resources forever, while another part allows people to have experiences.”

To enforce these kinds of closures and to regulate parking and booking, you also need staff. Olson says that’s been a problem as numbers have shrunk, budgets have stagnated and seasons have lengthened. “Our seasonal workforce is the backbone of visitor services,” he says. “If you’re a park that has a budget for six months of seasons and your season has grown over time to nine months, that’s stressful.”

He says increased funding is another crucial part of keeping the parks going in perpetuity, and they also try to show that need through the numbers. One of the major socio-economic studies that Newton and other social scientists are working on will show how visitors have positive impacts – how they can strengthen communities in and around parks. “Our last report showed something like a $41.7 billion benefit to the US economy and 340,000 jobs,” Olson said. “In terms of spending plans and budgets for parks, I think it’s safe to say that parks could use additional funds, but appropriations have increased.”

He notes both the park’s infrastructure plan passed a few years ago and the recent bipartisan infrastructure bill that will help take care of roads, bridges and facilities. And in the last federal report expense bill, the National Park Service has secured a funding increase of $142 million from current levels. He says that’s great, but it’s not a silver bullet either.

In the face of increased impact and growing access, we need it all: patience, funding, plans and creativity. We must respect others’ boundaries and sense of space. And we need to keep outdoor spaces accessible to everyone.