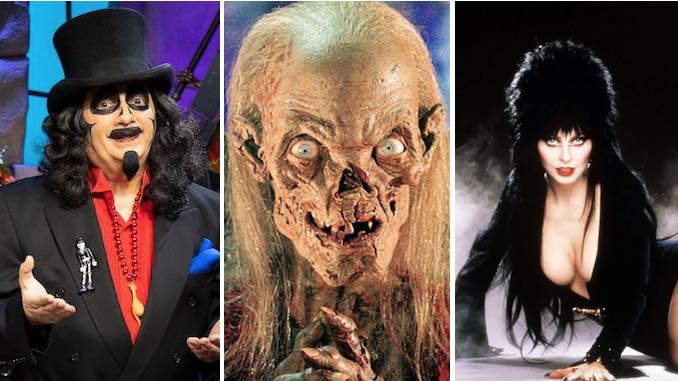 Beginning in the 1950s, local television networks licensed or wholesale bought worthless horror and genre movies, but the content was reformatted to dress up shitty movies and make them feel even slightly curated. Enter the Horror Host: a spooky, heightened character who has struck a balance between unironically loving the unassailable guff cannon and mercilessly mocking his shit – the perfect horror fan substitute. Through their costume, their low production value sets, and a lot of dry ice, the experience of poking fun at B movies at home with friends was viewed and tolerated, and the accidental camp of those shitty movies was made textual by the horror host.

But this version of the horror host is just one version of the character; they not only curated existing narratives, they also introduced their own original programming. Guillermo Del Toro comes out from the back of his Pinocchio world premiere with this week Cabinet of Curiositiesa horror anthology series featuring the work of some of the world’s modern horror heavyweights, and has confirmed that it will feature every episode, in line with the great Rod Serling blurred area and night gallery accommodation. With 70 years of various horror hosts, many have achieved iconic status, but which one best set a spooky tone for ongoing horrors?

When you first look at Bob Wilkins, you get the idea that he is attacking the conservative masculine man; a stern, stiff, cigar-biting family man who’s willing to teach you how to drive because he knows best – the twist being that he tells you to watch shitty horror movies. But then you look a clip by Bob Wilkins and you realize he’s the horror host version of Joe Pera. In my opinion, this is far preferable; what may at first seem soft and gentle soon becomes warm and inviting, there’s a strange company when you learn that the quiet guy in your Bay Area hometown may actually be the regional expert in the field. strangest and most useless expertise. There is nothing scary about him, but there is something charming.


Inheriting the role of vampy seductress from the iconic Vampira decades earlier, Cassandra Peterson’s Elvira has made a huge dent not only in her contemporary horror world, but in wider pop culture as well. Dressed brand new in black, with huge hair and macabre makeup, she bursts with brilliant charisma from her lounge chair, bouncing between outrageous innuendos and acerbic digs at whatever she introduces. It is impossible not to be affected by Elvira’s charm; his attitude is contagious and you’ll probably find yourself smiling at his intros, no matter how moan-worthy his jokes are. In terms of dread, she ranks pretty low, but only because she inspires so much love and goodwill (Elvira says gay rights!). Others may find her scarier because of how intimidated they are by bossy and funny women.


In its two iterations, first as Jerry G. Bishop on Screaming Yellow Theater and then as Rich Koz, Svengoolie brings all the wonders of local Illinois television to life. A hippie ghoul man and jazz trumpeter, I am fully convinced that this man’s mission is to wreak as much chaos as possible in the homes of Chicago, launching into a multitude of parody songs with his muted piano player, adorned with an enviable variety of themed headwear, and live-action shitty movies, all with the energy of someone who was told to fill two hours of airtime with 20 minutes of prep. There is a floating skull that will often join all of the above. It all looks like an exercise in making an exhausted local television crew cry with laughter behind the cameras. Svengoolie isn’t scary in the traditional sense, but in terms of bringing explosive anarchy to the homes of the good people of Chicago for decades, he is terrifying.


There’s no horror host without Rod Serling, and there’s certainly no guy Guillermo Del Toro imitates on his anthology show. What differentiates Rod Serling from someone like Svengoolie (the first time these two have been compared) is that Serling introduces programming that has its origins in his oft-written stories that he himself wrote . Serling would regularly introduce episodes of The twilight zone from inside the scene itself with a taut smirk and striking bushy eyebrows; he always seemed to smile through intense stomach cramps, or that he was indifferent to the misfortunes of the people we are about to learn from. He’s more disturbing than scary, but keep an eye out for him to start telling your life story, because wacky things might happen to you in the service of moral instruction for 1960s audiences.


Trust Warner Bros. to score a big-name horror host to blow all low-rent LANs out of the water. It’s unclear what the other Munsters were too busy with around 1987-89, but surely it’s nice of Grandpa to spend time showing shitty horror movies to everyone who had nothing better to do on a Saturday. Watching grandpa intros is a disturbing live; we’re thrown into states of disorientation because he’s not addressing the right camera in the multi-camera setup, and he’s prone to delirious, spiraling laughter – likely due to the cloudy gas being pumped without slackens in the cellar in which we are Unlike the opening of Tales from the Crypt, we’re not led into the crypt to meet our haunted horror host, we’re already inside and grandpa comes down the stairs to meet us, implying he’s tricked his audience there to his own amusement. The only non-scary part of Grandpa’s accommodation is that a dark, damp crypt is actually a pretty good place to store the film reels he selects, although they may do without being thrown away. so carelessly.


The macabre makeup is effective, but John Zacherle could hold his own as a horror host on the mood alone. Bless him, he always dressed for his Philadelphia (and later New York) audience, never seen without his aristocratic garb with sleek, neat hair, as he lurks around his crypt to witness to all the haunted apparitions and creatures that had conveniently always been off-screen. Nicknamed “The Cool Ghoul” by Dick Clark, it’s hard to see how he radiates cool by any modern standard, but hey, maybe 50s, this sultry gentleman with a penchant for slime and secretions was impeccably fashionable. It is easier to understand this nickname if you look at the time at which it hosted a dance party, where the slightly chaotic atmosphere looks like a lot of deranged fun – if you exclude all the weird hand-kissing.


TV’s first horror host had to set the tone for the next seven decades, so luckily the creepy villain Vampira was up to the task. Her intros began with a smoky hallway in the dark gloom, where a pointed hourglass figure strode towards the camera, and as Vampira’s gaunt expression and arched eyebrows appeared, she let out a chilling scream. blood. This is one of the only recorded evidence we have of The Vampire Show, as if you didn’t watch it on KABC-TV in the 50s, there are hardly any recordings available now. There’s something hypnotic and unsettling about Vampira’s presentations, its drier jokes, less goofy and campy than its successors. But that didn’t stop Vampira from pursuing a direct successor: the vampire Elvira. There’s nothing scarier than a litigious vampire and the intricacies of US copyright law, which puts Vampira at the top of the list.


That’s right, we’re in the puppet section of this list. There are few horror hosts more iconic than the Cryptkeeper, a rotting corpse with an enlarged skull and a perverse joy in recounting the misadventures of those unlucky enough to appear on a horror show. premium cable anthology in the early 90s. There is some confusion regarding the role of the Cryptkeeper; as his nomenclature suggests, he has domain over the whole crypt and is in charge of its upkeep, but he is a decaying undead, and as the opening reveals, he begins each episode by stepping out of his own coffin. How can he oversee the upkeep of a crypt if he is one of the bodies kept there? It’s a real puzzle, which the Cryptkeeper hopes to distract us with his high-pitched voice, his impressive array of costumes, and even his rap skills.


There’s the low budget, then the local low budget TV stations, and then there’s Nigel Honeybone: an Aussie skeleton who sits against a black tarp and makes you feel like you’re being held hostage in the sub someone’s floor. The fact that you can’t see the human mouth explain shitty genre movies to you adds a completely unshakeable sense of unease. Is it her rotation of garish and tacky outfits? Is the slideshow of pixelated images it uses as prompts? Or is it the intro of his coffin being carried through Sydney Harbor by two fashionable Benny Hill punks? It’s hard to say, but if you ever want to fake an Australian skeleton puppeteer kidnapping, you can’t do better than Nigel.


Atmosphere and performance are key to scaring any audience, and in the context of hosting horror on local TV, Sammy Terry is the scariest man to ever walk the earth – or at least stream locally in Indianapolis. After a whispered incantation by candlelight, a ghoul clad in Exorcist-demon makeup and a red cape straight out of the Suspiria remake seems to sneer and smirk at the horrors that lie ahead. In terms of commitment, Sammy takes the cake and was undoubtedly a source of weekly distress for so many Indy locals. You can practically hear performer Bob Carter laughing in hair and makeup every week as he prepares to chill his impressionable audience once again.


Rory Doherty is a screenwriter, playwright and culture writer based in Edinburgh, Scotland. You can follow his thoughts on all @roryhasopinions stories.


For all the latest TV news, reviews, lists and features, follow @Paste_TV.