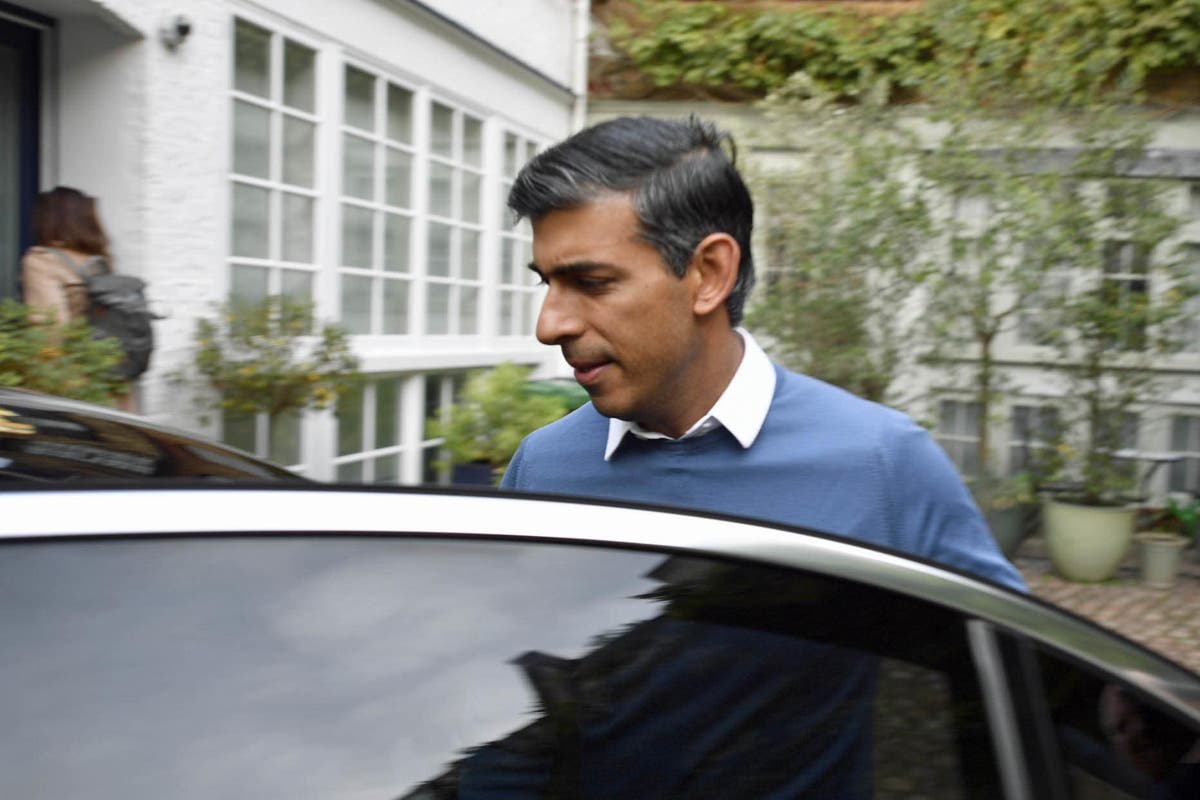 Ishi Sunak has won a valuable ally in his long-awaited bid for No.10 as Boris Johnson’s supporters have been challenged for claiming he has reached the number required to secure a place on the Tory ballot.

In a blow to Mr Johnson’s campaign if he seeks a second stint in Downing Street, International Trade Secretary and former leadership candidate Kemi Badenoch has thrown her weight behind the ex-Chancellor, insisting on the fact that now is not the time for “nostalgia for the cavalier elk of 2019”.

She admitted she had ‘on occasion’ been a member of the ‘Boris Johnson fan club’, but said the Tories ‘don’t run popularity contests’, and stressed that the party doesn’t was “not a vehicle for an individual’s personal ambitions”. .

Mr Johnson has returned to the UK to plot a second race for the top job in a decision that has divided opinion among Tory MPs, including his former allies.

He arrived at Gatwick Airport on Saturday morning with his family after having cut short a holiday in the Dominican Republic following the dramatic resignation of Liz Truss on Thursday.

He was rumored to be planning talks with Mr Sunak on Saturday – possibly face-to-face – but reports suggested there had been a delay.

The BBC later said a meeting had taken place, but this was not corroborated to the PA news agency by either side.

Meanwhile, an ally of the former Home Secretary, Suella Braverman, told the AP she had been personally ‘heavily courted’ by Mr Johnson and Mr Sunak and would likely decide who support the conservative leadership on Sunday.

Sir James Duddridge, an ally of Johnson, claimed the former prime minister had the backing of the 100 MPs needed to make it to Monday’s poll.

Former cabinet minister Karl McCartney tweeted: “Very happy (with so many of my constituents who came out to chat with me earlier today all over town) that @BorisJohnson has over 100 supporters/nominations, so can be on the ballot on Monday.”

But Sunak supporter Richard Holden cast doubt on that suggestion, arguing that the 100 public statements had not been announced “because they don’t exist”.

Sir Robert Syms, another Sunak backer, wrote on Twitter: “If Boris has 100 in the bag why is his campaign posting photos of him begging for votes?”

Despite being the only candidate to declare herself so far, Cabinet Secretary Penny Mordaunt is trailing on public support from MPs, with just 21 to 44 for Mr Johnson and 113 for Mr Sunak, according to an AP count.

Presenting her plan to “unite the party and the country” in the Express, she warned that the Tories had “been distracted by internal strife”.

Ms Mordaunt used her pitch to stress the need to ‘make Brexit work’, ‘focus on the potential of all our citizens’ and ‘defend our Union and its territorial integrity’, pledging her support for protocol reform controversial from Northern Ireland.

She insisted she was not seeking the top job for an “easy ride” and pledged to build a government that “draws out all our best talent”.

Writing in the Sunday Times, Ms Badenoch said her party needed to remind people that ‘the Tories care about the country, not about ourselves’.

The International Trade Secretary suggested Mr Sunak would bring a ‘disciplined approach’ to the government, citing his ‘fiscal conservatism’ and stressing that ‘right now being able to say no is what we need’.

She said everyone in the party will have to make “sacrifices” to prove to people that Tories can “unite”.

For her, that means refraining from a second leadership bid, she said, when some will have to give up government jobs under their preferred candidate “so that others can be brought into the tent.” “.

Mr Johnson’s potential return has divided opinion even among his allies in the parliamentary party, including his former deputy prime minister and foreign secretary Dominic Raab.

Mr Raab said ‘we can’t go back’ and stressed the former prime minister was under investigation into his actions regarding partygate.

He backed Mr Sunak, saying he was ‘very confident’ the former chancellor would stand.

Moments after Mr Johnson returned to the UK, ex-Home Secretary Priti Patel said he had his backing – but his potential offer suffered a setback as former close allies Steve Barclay and Lord Frost urged their colleagues to support Mr Sunak.

Mr Johnson’s father Stanley predicted his son would put his name forward and beat Mr Sunak in a one-on-one contest.

But he was trailing in nominations, although ahead of Ms Mordaunt.

The House leader, who finished third in the last leadership election, said she was encouraged by the support she received from fellow Tory MPs and wanted to unite the party.

She also assured Jeremy Hunt that he could remain Chancellor if she won.

Tory MPs will vote on Monday and two candidates will be put forward to party members unless one stands down, with the result announced on Friday.

Candidates have until 2 p.m. Monday to secure all 100 nominations, limiting the ballot to a maximum of three candidates.

Mr Johnson’s supporters believe that if he manages to qualify for the bottom two, he will win in the latest online poll of party activists with whom he remains hugely popular.

Some MPs have warned they will quit the Tory Whip and sit in the Commons as Independents if Mr Johnson returns to Downing Street.