Sheriff Cameron reflects on changes to agency for 16+ years 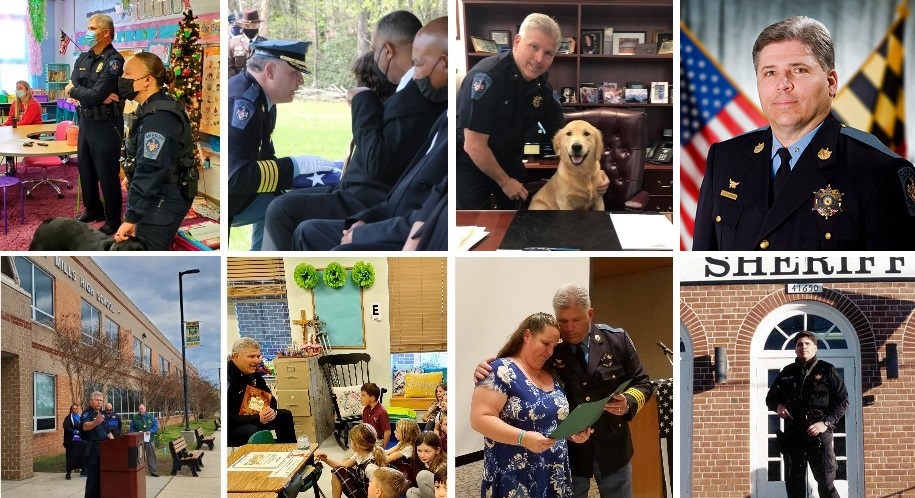 LEONARDTOWN, Md. — Tim Cameron joined the St. Mary’s County Sheriff’s Office as a deputy on July 3, 1980. Hired under Sheriff Joseph Lee Somerville Sr., the sheriff’s office then had 29 deputies and an operating budget of less than $1 million.

Cameron, 63, is now completing his historic fourth consecutive term as sheriff of St. Mary’s County, today an agency with 152 budgeted deputies and an annual operating budget of $58.9 million.

Sheriff Cameron recently took time to reflect on the changes he has seen in the past 40 years in law enforcement and during his four terms here in St. Mary’s County.

The sheriff fondly remembers his first cruiser as a deputy – a 1977 Plymouth Fury. It was a fast car, but it also had braking problems, he said. Police cruisers had radios, which had to be turned on high when a deputy was away from the vehicle to continue to hear calls. Soon MPs were equipped with portable radios that they could carry on their person.

“It was a game changer when we moved to the 800 MHz system,” said Sheriff Cameron.

Deputy sheriffs are now equipped with mobile data navigators in their police cars, displaying active calls on the county’s automated dispatch system. “We have great technology that works all the time,” he said.

Sheriff Cameron served in every division of the Sheriff’s Office during his career and said the Special Operations Division was his favorite.

Cameron briefly retired from the sheriff’s office and was named Director of Public Safety for St. Mary’s County in November 2005, a position he held until successfully running for sheriff. in the 2006 elections.

The sheriff still remembers a high-profile kidnapping at a local bank in California. “It’s a case for the ages,” he said.

Brown and Johnson then buried the rifle and buried $84,000 in cash in safes, which were recovered during a search of the property. The kidnappers were sentenced to prison terms ranging from eight to 19 years and were ordered to pay compensation.

Detectives in this case “did an amazing job,” Sheriff Cameron said.

Prescription pill abuse was the biggest problem of the day 16 years ago, and the sheriff’s office began tracking that data in 2007. But as prescription opioids continued to be abused locally and nationally, users found that the addiction was too expensive to maintain.

“We started cracking down on the pills and people turned to heroin, which was cheaper and more plentiful,” Sheriff Cameron said.

Law enforcement is still struggling with the effects of opioid and heroin abuse. Deputies routinely administer Narcan to those who overdose, often saving victims’ lives. In 2022, nearly 100 doses of Narcan were used by MPs in overdose responses.

The prevalence of fentanyl, a deadly substance added by drug traffickers to their product, further aggravates addiction problems.

“Everything is made in China and this product crosses the border unchecked,” Sheriff Cameron said.

And then COVID-19 entered the world stage and made its way to Maryland and St. Mary’s County. “It challenged every aspect of government service,” the sheriff said.

With a stay-at-home order issued by the governor in March 2020, “I’ve never seen anything like it – barren streets,” in St. Mary’s County, Cameron said.

But the sheriff’s office remained open and fielded calls throughout the pandemic.

Sheriff Cameron noted that no one in St. Mary’s County has been cited for non-compliance with COVID regulations, as the focus was on education rather than enforcement.

And at the same time, police departments across the country were facing protests following the death of George Floyd in Minnesota in May 2020.

In early June, hundreds of protesters marched peacefully outside the government center in Leonardtown. What people didn’t see was the security provided by the sheriff’s office for the event. “I had no concerns about people protesting. We had to be ready to protect the protesters,” the sheriff said.

No arrests were made during the protests.

And while law enforcement continues to struggle with recruitment and retention across the country, Sheriff Cameron said he was very pleased with the progress the agency has made during his tenure.

“There was definitely a need for a culture change here,” Cameron said when he first took office as sheriff. “It took a number of years to change the culture. There is now an absolutely healthy culture – our mission is to protect our citizens from criminals and events. We have very talented, hard-working and very disciplined people here,” he said.

His philosophy as Sheriff was to hire quality candidates, maintain high levels of employee training, continually reinvest in staff and hold them accountable and “working to have a community that is engaged and proud of its police. “, did he declare.

“Just tell people what it is,” Sheriff Cameron said. “If you engage the audience and ask them to be your eyes and ears, they can do it. Just let them know what they are looking for.

Sheriff-Elect Hall said of Sheriff Cameron, “If there’s one person who has set an example, bucked trends, and reshaped the perception of local law enforcement, it’s you.” When he first met Cameron when he was 16 at Mattapany Camp, Hall said. “Since that day, I’ve been amazed at how people have been drawn to you — the ease and comfort with which you held conversations and the caring attention of those around you,” Hall said.

“I was influential and wanted to do not just what you did, but how you did it,” he said. “I admire your passion for people in our profession and your thirst for education. Forward walking, forward leaning and tracking is Cameron’s way,” Hall said.

“I am deeply moved by a principled life lived in service to others without complaining or slowing down. This is your legacy to all of us. You will always be the man in the arena for me,” Hall told Cameron.

-DARE (Drug Abuse Resistance Education) program for 5th and 6th graders was reimplemented by the Sheriff’s Office during the 2007-2008 school year and continues each year.

As he leaves the Sheriff’s Office on Friday, December 2, 2022, Sheriff Cameron was recently selected to lead the Wyoming Highway Patrol, a new role he begins in January 2023.