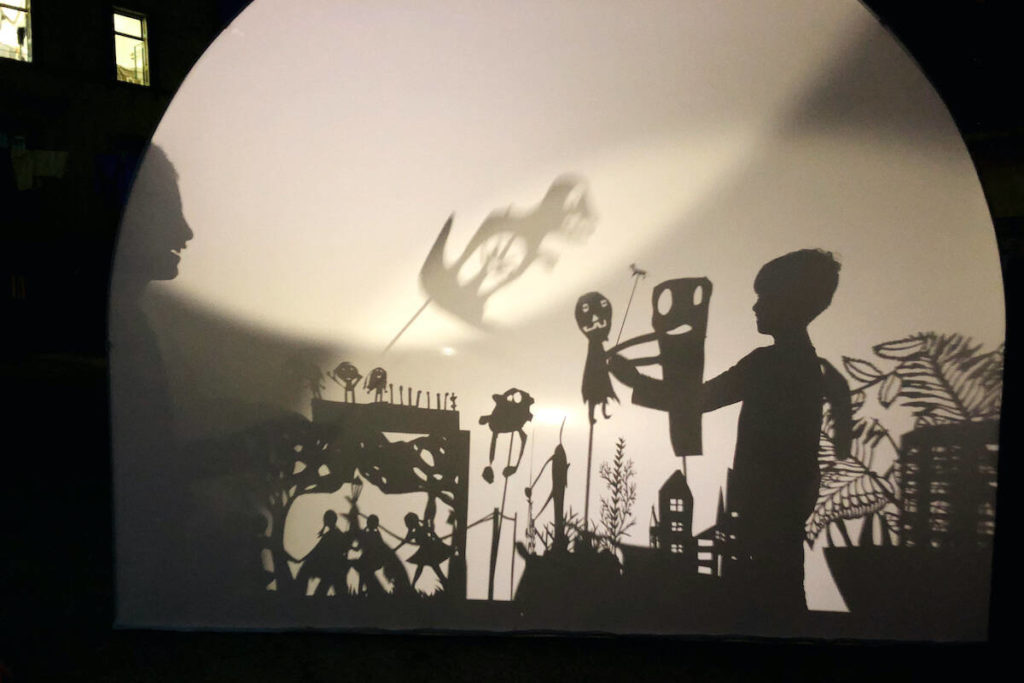 The Surrey Art Gallery’s summer exhibition is all about playing with light and shadow.

An interactive installation, “Shadows Without Borders,” was created by Montreal artists Maya Ersan and Jaimie Robson in 2018, and is now gearing up for a two-month exhibition at Bear Creek Park Gallery, starting Friday, June 18.

With their partnership Mere Phantoms, Ersan and Robson use shadow play to explore the relationship between memory and architecture, people and place.

A few years ago, their moving interactive shadow installation traveled to refugee camps, squats and settlements in Athens and Istanbul. The duo have facilitated paper-cut and shadow workshops and play sessions with children and families in these cities.

“The initial idea came from the outbreak of the Syrian civil war,” Ersan explained. “Having grown up in Turkey and Cyprus, I knew very well the consequences of such events. Jaimie and I wanted to do something that could make a difference in our own way with our unique toolset of bringing shadow play to vulnerable and displaced families.

At the Surrey Art Gallery, some of the works created in Greece and Turkey are included in the exhibition, along with a shadow-casting tent and bespoke flashlights.

Also featured are a series of photographs from a night of shadow play in an Athens squat, as well as a seven-minute video documenting the workshops and sessions in Athens and Istanbul, in collaboration with filmmakers Leila Shifteh and Harun Yasin Tuna. New paper-cut paintings which will go on display for the first time at the Surrey Art Gallery, where ‘Shadows Without Borders’ continues until August 14.

The two artists from Mere Phantoms will give a talk about their work on Sunday, June 19 at 2 p.m. Admission is free but registration is required at surrey.ca/artgallery.

Shadows Without Borders by Mere Phantoms of mere ghosts on Vimeo.

During the summer exhibition, visitors are invited to engage with the artwork. People can add their own cutouts to this ever-changing interactive installation and grab a flashlight to animate the flipcharts.

“This project is humble in its ambitions,” say the artists. “He makes no effort to document or record or even solicit personal stories. Instead, it provides a space for creative play in which humor, sadness, joy and creativity can be expressed. It offers a momentary break from everyday life in a temporary home. Ultimately, this piece is about play. Participants are invited to pick up a shadow lamp, cut out paper, and immerse themselves in this fleeting world of light and shadow.

The exhibition is presented at the Surrey Art Gallery by curator Jordan Strom.

“I hope this will lead many visitors to consider their own family histories of migration and/or displacement, while also opening space for them to consider the experiences of others who have been forcibly expelled and displaced from their home countries. origin in recent years,” Strom said in a press release.

“Shadows Without Borders” is one of 200 “outstanding projects funded by the Canada Council for the Arts’ New Chapter program,” the statement noted. “With this $35 million investment, the Council is supporting the creation and sharing of the arts in communities across Canada.

Following the Mere Phantoms Artist Talk, local artists Jim Adams, Roxanne Charles and Cora Li-Leger will pay tribute to Liane Davison, recently retired as Director of Culture for the City of Surrey and former Curator and Director of Surrey Art Gallery, and there will also be a book launch for TechLab: Experiments in Media Art 1999–2019.