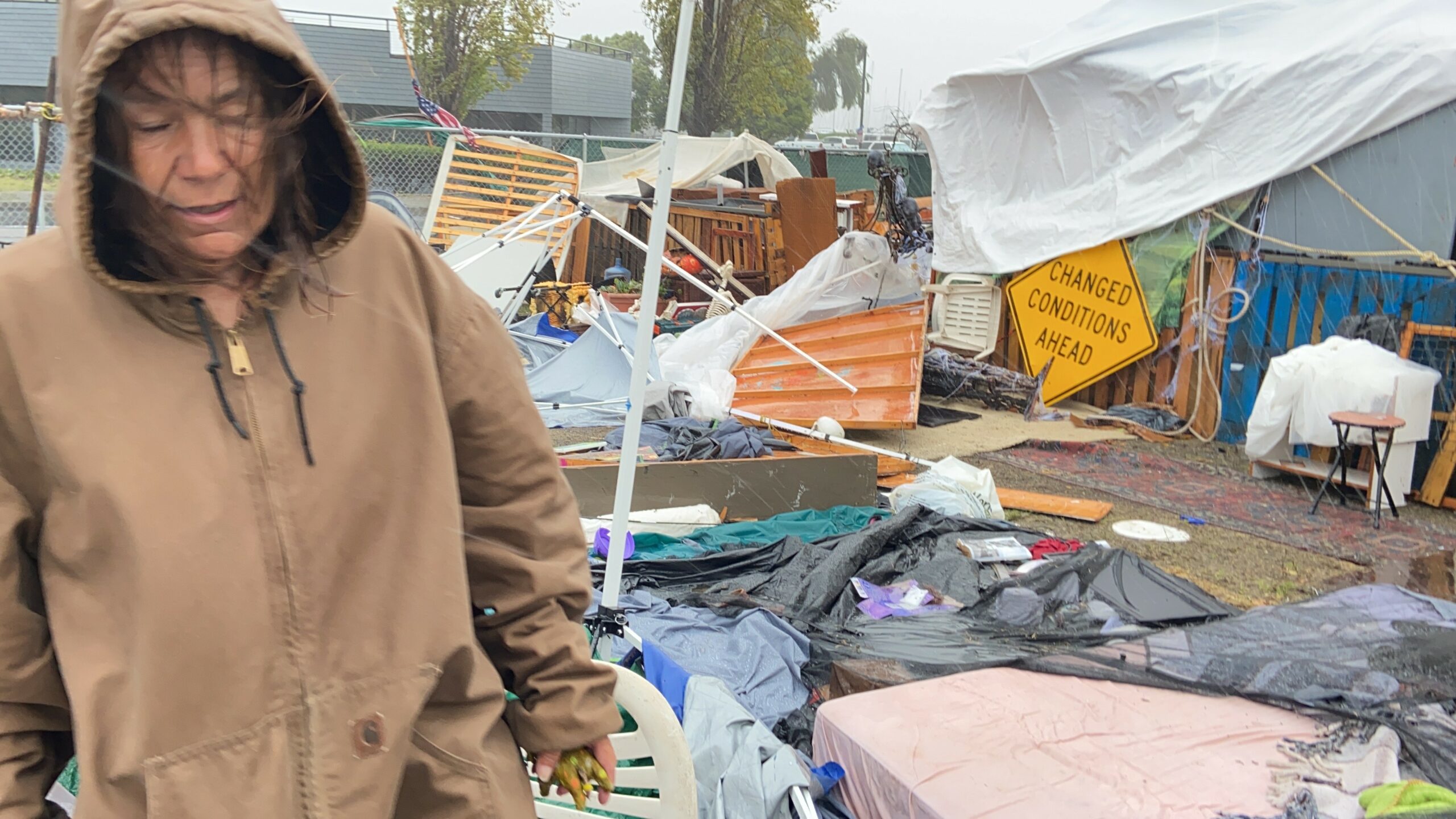 The Sausalito Homeless Union and the City of Sausalito are set to face off again in U.S. District Court in Northern California next month. Court documents filed last week by the homeless union argue that Sausalito should be held in contempt for failing to protect and cause harm to residents of the city-sanctioned homeless encampment, an alleged violation of a previous court order.

“When the City of Sausalito moved the camp to Marinship Park, they took responsibility for making it safe,” Sausalito Homeless Union attorney Anthony Prince said in an interview. “The court order authorizing the move stated that the basis was safety. The city has a duty of care, which it would not have had if it had let the residents stay in Dunphy Park. Our motion is to hold them for contempt of court for failing to secure the camp.

The parties have been embroiled in a trial since February, a trial that has Cost Sausalito about $500,000 so far, City Manager Chris Zapata said during a September city council meeting. The Sausalito Homeless Union is represented pro bono by Prince.

The Homeless Union’s new charges against Sausalito include the assault of two female campers by police officers, the city’s failure to protect the sanctioned Marinship camp from the “bomb cyclone” storm in late October, and threats from the city to demolish a storage shed being built by volunteer at the camp.

Michael McKinley, a civilian employee of the Sausalito Police Department, threw stones at then-camper Holly Wild in September, according to the court filing. Wild and a witness who filmed the alleged assault attempted to file police reports on the incident, but officers Nick White and Edgar Padilla refused to take their statements. A few days later, the department finally accepted a report that Wild filed with the station. Wild no longer resides at the camp due to concerns for his safety.

After the alleged rock-throwing, the city placed McKinley on unpaid administrative leave pending a criminal investigation by the Marin County Sheriff’s Office. However, no action was taken against the officers who repeatedly refused to take reports of the alleged assault, according to the court filing.

Sausalito Mayor Jill Hoffman gave the Pacific Sun three conflicting statements about investigations into police conduct, including two in the past few days.

“The City of Sausalito has also initiated internal personnel investigations, for which we will hire an independent investigator,” Hoffman wrote in a September email.

I contacted the mayor again last week to follow up on the matter and she responded the next day.

“Once the sheriff’s office has completed its investigation, the city – per protocol – will then conduct its internal investigation using the services of a suitable and qualified outside contractor,” Hoffman wrote in an email on Tuesday. November 5.

Hoffman appears to have confused two issues: McKinley’s alleged assault on Wild and the officers refusing to take a police report. One is a criminal investigation conducted by the Marin County Sheriff’s Office and the other is an internal investigation run by the City of Sausalito. Both could occur simultaneously.

The prosecutor’s office has confirmed receipt of the report and is reviewing it to determine if charges will be brought against McKinley.

I informed Hoffman that the Marin County Sheriff’s Office completed its investigation three weeks ago. Based on Hoffman’s previous statement two days prior, I assumed she would say that internal investigations into police conduct would begin immediately. However, this is not the case.

“With respect to the Marin County Sheriff’s Office, we are aware that the office has forwarded its criminal investigation to the District Attorney’s Office for review,” Hoffman wrote in a Nov. 8 email. “The City of Sausalito will not initiate an internal investigation into the allegations against the civilian employee and the police officers until we hear from the district attorney.

A reasonable person might conclude that the mayor’s changing narrative and the delays in launching internal investigations indicate that the officers’ conduct is not being taken seriously. Ditto for the results of the atmospheric river the Bay Area experienced in late October, which leveled the city-sanctioned homeless encampment.

Although the city was given ample warning of the severity of the weather system, considered the worst storm in a century, authorities did not move campers from Marinship Park, which is located at low elevation and prone to flooding. Instead, the city delivered “gravel, sleeping bags, hygiene kits, tarps and tents” ahead of the storm, Mayor Hoffman said.

Campers argue over items provided by the city. Either way, supplies were totally inadequate for the brutality of the storm, said Robbie Powelson, president of the Marin County Homeless Union.

Sections of a fence installed by the city to enclose the camp fell on tents. Almost all the tents collapsed, either because of the strong winds or because of the fallen fence. As expected, Marinship Park was flooded. Personal belongings were soaked and many of the approximately 40 campers took refuge by huddled in the toilets.

Community members rescued 18 of the most vulnerable campers by paying for seven hotel rooms and hot meals. Other residents took shelter in cars or on higher ground.

No one from town came to camp during the brunt of the storm, which began late Oct. 23, to check on campers. The following evening, a Red Cross shelter was set up in a Sausalito school gymnasium with 20 beds, which would have accommodated only half of the camp’s displaced residents. At that time, only six people remained at the camp, and they declined the city’s offer to move.

As campers returned to Marinship Park after the storm, the donated items arrived from the community, not the city, camp residents said. New tents, sleeping bags, clothes and food allowed them to rebuild the camp.

A local non-profit group, Marin Housing For All, donated $3,000 in materials to build a storage shed to protect essential camp supplies, according to group co-founder Jason Sarris, who is also without shelter and lives in an encampment in Novato.

Volunteer Emilio Pineda began construction of the wood shed on October 27. Two days later, the city issued a stop work order stating that a building permit was required. Pineda then applied for the permit, but the building department denied the application. The city returned to camp on November 1 with a 72-hour notice calling for the structure to be removed.

Prince contacted Arthur Friedman, Sausalito’s outside attorney for international law firm Sheppard Mullin, and was told the city intended to demolish the storage shed on Nov. 5. This threat was the final straw for Prince and the camp residents.

As Prince continued to negotiate with Friedman over the storage shed issue, he also filed the motion for contempt and sanctions against the city, as well as a variation of the preliminary injunction issued in federal court by Judge Edward Chen. earlier this year, which prevents Sausalito from banning day camping. The campers are asking the court for permission to allow overnight camping outside the designated Marinship area, due to safety concerns.

Prince and Friedman have come to an agreement allowing construction of the hangar to continue, and the finished structure can remain at camp. Judge Chen, unaware that the parties had resolved the dispute, issued a restraining order to prevent the city from removing and demolishing the shed. At Prince’s request, the scheduled hearing on the case has been removed from the court schedule.

The remaining claims made in the motion will be heard next month before Judge Chen. And another problem also surfaced.

Marinship Park’s stagnant water is contaminated with feces, according to a bacteriological examination by Brelje and Race laboratories, commissioned by campers. Prince maintains that there is a sewer leak somewhere causing the excess fecal matter. According to Hoffman, the city has checked the bathrooms and no leaks exist.

There appears to be no end in sight to the discord between the city and camp residents, even as Sausalito’s legal costs skyrocket. Prince says campers will continue to take steps to keep them safe.

“It’s a political question,” Prince said. “The city just doesn’t want the homeless to organize for their own benefit.”