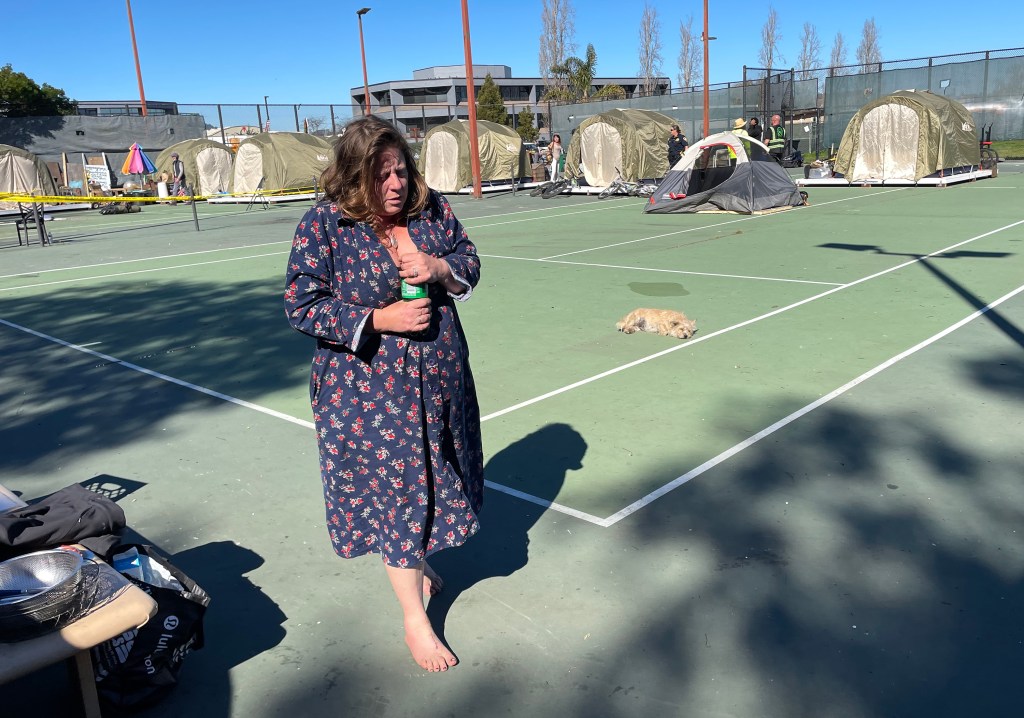 Sausalito declared a state of emergency on Thursday over living conditions at its homeless camp following explosions and fires.

The incident happened Wednesday night at the Marinship Park camp tennis courts, and the city reported an arrest.

Thursday morning was the deadline for unprotected residents to move from a fecal-contaminated grass field to a new campsite on the tennis courts.

SAUSALITO: I’m here at the tennis court camp at Marinship Park with @sherlavars. The homeless had to leave the lawn this morning. Campers reported a propane tank fire and explosion last night. @marinij pic.twitter.com/as4wB6iqZV

The emergency declaration was accompanied by a statement from Mayor Janelle Kellman, who called on the county to provide assistance in managing the crisis at the camp.

“We have worked closely with county officials over the past 14 months, but this state of emergency is a clear signal to Marin County leaders that our small town needs additional county resources, money and manpower to deal with this crisis,” Kelman said.

The city’s management of the site “costs an overwhelming amount of taxpayers’ money and private landowners have suffered significant losses,” she said.

In December, the city approved a nearly $500,000 deal with San Francisco-based Urban Alchemy to provide services to homeless campers at Marinship Park for six months.

Benita McLarin, director of the Marin County Department of Health and Human Services, said her office contacted the city this morning to inquire about the incident. She included a list of partnerships and financial aid granted to the city. The county committed $167,500 for Sausalito in December to help with camp expenses.

“Additionally, we understand that many homeless people, especially those who have not been housed recently, prefer to stay and seek support in their home community,” she said. “We will continue to assist Sausalito in its overall efforts to address homelessness.”

The city’s statement, titled “Local Emergency Proclamation,” was signed by City Manager Chris Zapata, who is also the city’s director of emergency services.

The statement said the camp is in “conditions of extreme peril”. He said the camp had been the scene of “dangerous and sometimes criminal activities” which included “fires, explosions, public consumption of alcohol and drugs, violence and threats of violence, and degradation and damage to public and private property”.

The emergency ordinance will remain in effect for a maximum of seven days before it must be ratified by the city council, he said.

Robbie Powelson, president of the Marin County Homeless Union, said the statement deflected the city’s neglect of the fire.

“Since we moved to Marinship, they’ve declared a state of emergency as a way of waving and pretending to do something,” he said. “I am declaring a state of absurdity because how many people are they going to house with this declaration?”

On Wednesday evening, a series of small booms sounded as a fire ignited around a tent, campers reported. Then a massive, reverberating explosion rocked the entire camp.

Emilio Pineda, a camper, said a pillar of blue-tinged flames towered 30 feet above the tennis fence.

“That’s part of the problem. We have to make sure the camp is safe,” Pineda said. “These kinds of situations create these things. It was already volatile. This proves that this is not the solution. »

No injuries were reported.

Firefighters received reports of the blaze around 7:15 p.m. and quickly extinguished it, according to the Southern Marin Fire Protection District. Police determined that a woman had used a lighter to set her tent and a nearby tent on fire.

Debra Ellen Hazelwood, 61, was jailed in Marin County Jail on suspicion of arson. The police submit a case to the court asking for a bail increase to $150,000. Hazelwood remained in custody Thursday night.

Campers received notices Monday morning regarding the deadline for leaving the Marinship Park grass field. Jeff Jacob Chase, a resident of the homeless camp, said crews began arriving around 7:30 a.m. Thursday morning. He said they fenced off the entrance to the park so it was inaccessible to campers.

Two bulldozers piled and pulverized a bus-sized mound of camp debris behind the fence around noon. The hodgepodge of items included tents, bicycles, boxes, cans, clothes, chairs and pumpkins. At one point, an American flag draped over the garbage slope. A structure built by the campers and designated as a storage shed was taped off and intact.

A mound of charred debris was isolated in a back corner of the tennis court with yellow caution tape. The workers swept the ground and took a chainsaw to the blackened platform, apparently where one of the tents once stood. They piled the debris in a large trash can.

On Thursday, campers described the atmosphere at camp as tense. They said the relationship between campers and city officials, the police and Urban Alchemy was growing increasingly hostile.

“It was a hive there. Now it’s a wasp’s nest,” Pineda said. “I really blame the city for making all the mistakes.”

The tennis court camp consisted of about 25 tents Thursday, provided to campers by the city. Set on platforms, many were personalized — one with an in-progress painting of Mount Tamalpais, one with a small Buddha statue, another with plants and patio furniture. The dogs roamed figure eight around the tents or basked in the sun.

Sarah Gossage, a camper, said the small house she lived in, which was on the concrete near the entrance to the grass field, had been destroyed.

“I understand that they gave us a warning. But 72 hours is not enough. It’s an unreasonable amount of time,” Gossage said. “Now it’s on.”