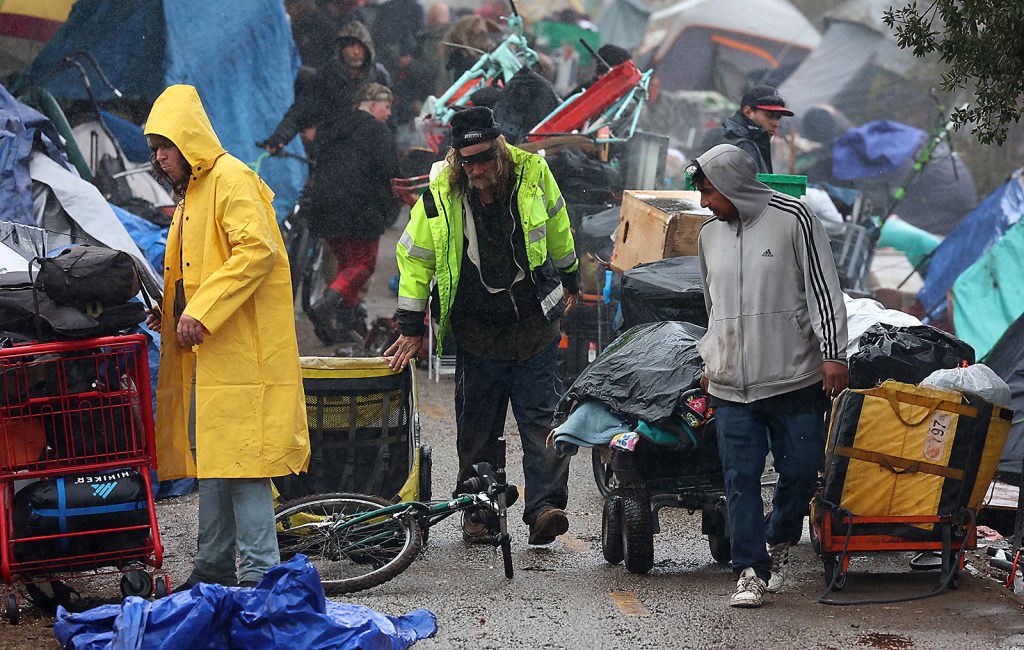 SANTA CRUZ — While the less than a quarter-mile stretch of San Lorenzo Park green space between the Water Street bridge and a pedestrian walkway was vacant and nearly silent Tuesday morning, a small piece of the encampment of sans -remaining shelter was buzzing with activity.

This space was the last part of a city-sanctioned homeless encampment that has remained in the space at or above the river in the park proper since shortly after March 2020. In September, the city began closing the camp, area by area each week, after citing public health and safety concerns. In order to comply with federal guidelines against criminalizing the act of sleeping, the city first established two new organized encampment areas as alternate shelter options.

Larry Imwalle, whose roughly year-long tenure as Santa Cruz’s homelessness response manager has been swallowed up by a fight over the future of Camp Benches, said the city’s work doesn’t was not finished with the definitive closure of the benches camp. Additional temporary emergency shelters are needed, he said, “because there are still too many people without homes”.

“We have the people who are currently in the armoury, the 135 people who are now in better housing conditions and this is sort of a step towards more stable permanent housing,” Imwalle said, reflecting on the camp closure. “That has also been our goal, to have better shelter, better support services for our homeless community.”

City of Santa Cruz homeless response officials estimated that some 24 people were still living in the San Lorenzo Park Benchlands camp in the week before “Zone 7” finally closed in the morning. Ahead of the latest area closure, 10 people moved into the City Overlook managed encampment in DeLaveaga Park – featuring both outdoor tent space and an indoor site inside the National Guard Armory, leaving 16 vacant jobs. Six other people accepted city vouchers allowing access to the site on Tuesday, Imwalle said.

An hour into the cleanup, the former occupants had piled their belongings along an adjacent sidewalk, some sitting and watching police move from tent to tent, others jostling back and forth to unknown destinations. In the weeks leading up to the final clearing – which is expected to continue with debris collection for the next few days – the city collected some 383 tons of trash, according to Imwalle.

Longtime occupant of the benches Billy Lowery traveled along the walkway, approaching several people who appeared to be strangers to the camp. He said he was looking for someone who could connect a mostly tent-bound woman to appropriate services. He said he had tried to help care for the woman over the past year by ensuring regular deliveries of supplies. Earlier in the morning, when the woman resisted efforts by law enforcement to leave her space, Lowery said he offered to mediate. Eventually he asked the police to give them space, found a wheelchair and pushed her down the dirt embankment to the catwalk. Some time later, she sat on the side, with no clear destination and sharing fears about the City Overlook camp.

Lowery, a now-unemployed released felon who spent a lot of time in jail, said he really appreciated the freedom offered by the camp. As with many who spoke with the Sentinel as the camp closed, Lowery said he did not know where he would go next, although he offered to seek refuge in the armory with his friend, so to facilitate his transition. He added that he had remained one of the occupants of the bench tent since 2016, but it was not until the coronavirus pandemic hit locally in March 2020 that the benches began to fill heavily with others. people similarly looking for a safe place to stay.

“Something had to happen to all of these people to get them here,” Lowery said of the camp’s final closure on Tuesday. “People shouldn’t just give them up.”

Going forward, the city’s homeless outreach staff will continue to hold “office hours” from 11 a.m. to 1 p.m. next Thursday and Tuesday at the picnic tables behind the Santa County Government Center Cruz, in addition to targeted encampment outreach, according to Imwalle. Workers can also be contacted directly by calling 831-359-5996.