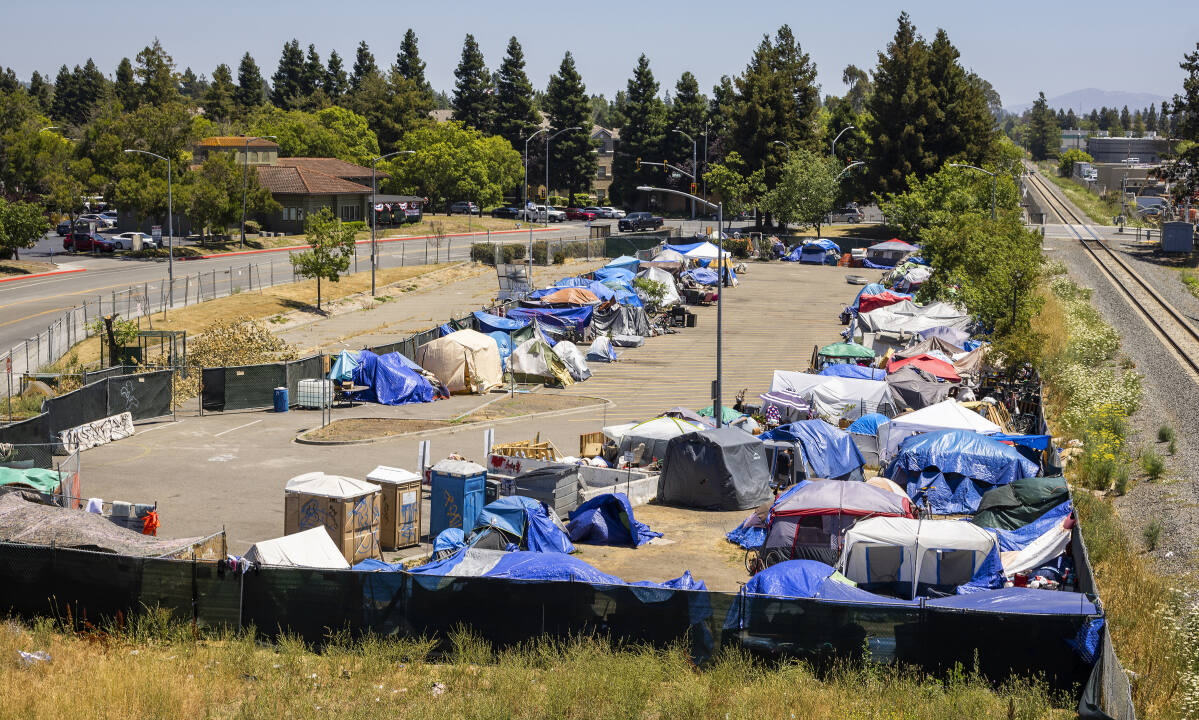 Rohnert Park began the process of reducing capacity at the homeless camp on Roberts Lake Road this week as the city prepares to open long-awaited interim housing within two weeks that could provide shelter for many residents of the camp.

City officials issued notices to the roughly 110 residents on Tuesday that the city plans to reorganize space over the next few weeks as some residents move to new 60-unit supportive housing on Labath Avenue and as the remaining residents move into a smaller, managed camp site.

“Our goal is to house a good portion of the camp residents and provide a safer, cleaner option for those who remain,” said Mary Grace Pawson, director of developmental services at Rohnert Park.

Ultimately, the city is seeking to move everyone at the camp, the largest of its kind in Sonoma County, to temporary or permanent housing and permanently close the site.

Rohnert Park officials stressed that no fixed timetable existed for the closure. Camp was first set up in February at a park and ride facility just east of Highway 101.

The reorganization comes amid heightened frustration from residents and businesses over the size of the camp and how to tackle rising homelessness in the city.

And it comes as the city council has in recent months backed updating the city’s camping ordinance to give authorities more teeth by banning camping in certain areas of the city and limiting the size of camps and items allowed in camps on public property to address the accumulation of waste, safety concerns and to mitigate the risk of fire in camps.

City officials held a meeting at the camp on Tuesday to update residents on the changes and answer questions. No new residents will be allowed into the camp after Tuesday and anyone wishing to stay must have registered with the city.

Over the next two to three weeks, city officials will work with service providers to identify people interested in moving to the new housing site, known as Labath Landing. The first residents are expected to move in on October 24.

The remaining residents will be offered space at a smaller camp on the east side of the park-and-ride facility where the city plans to set up 10-by-10-foot spaces. The city will provide tents for residents and all personal belongings should be kept within the parameters in accordance with the city’s new camping rules.

This will help address overcrowding and security issues, Pawson said.

Pawson expects about 40 to 50 people will remain in the run camp after the reorganization, she said.

Those who refuse to move to the new camp will receive a relocation notice. No one will be allowed to camp within 1,000 feet of the camp starting October 27, according to the city’s new camping rules.

HomeFirst Services, a non-profit organization based in Milpitas, which will operate the new Labath units, provide 24-hour services at the camp and help connect the remaining residents to shelter or housing.

The city has also contracted with a security company to provide a 24-hour presence at the site. Wardens will maintain a list of residents, monitor camp visitors, enforce campground rules, and deal with security issues.

The city will continue to remove trash and provide portable toilets. The city currently provides garbage collection, portable toilets, and hand-washing stations, which are paid for under its existing contract with waste hauler Recology, and spends up to $8,000 a month to remove trash. hazardous materials once a week.

Officials are reaching out to other service providers across the county to access shelter beds and continue to work with regional partners to create more interim and permanent housing, Deputy City Manager Don Schwartz said.

Pawson said the goal was to house everyone.

“Most of the residents there are very vulnerable,” Pawson said. “As we work on this reorganization effort, the more people we can work with to improve the situation, the more helpful it will be for the residents of the camp.”

You can reach editor Paulina Pineda at 707-521-5268 or paulina.pineda@pressdemocrat.com. On Twitter @paulinapineda22.