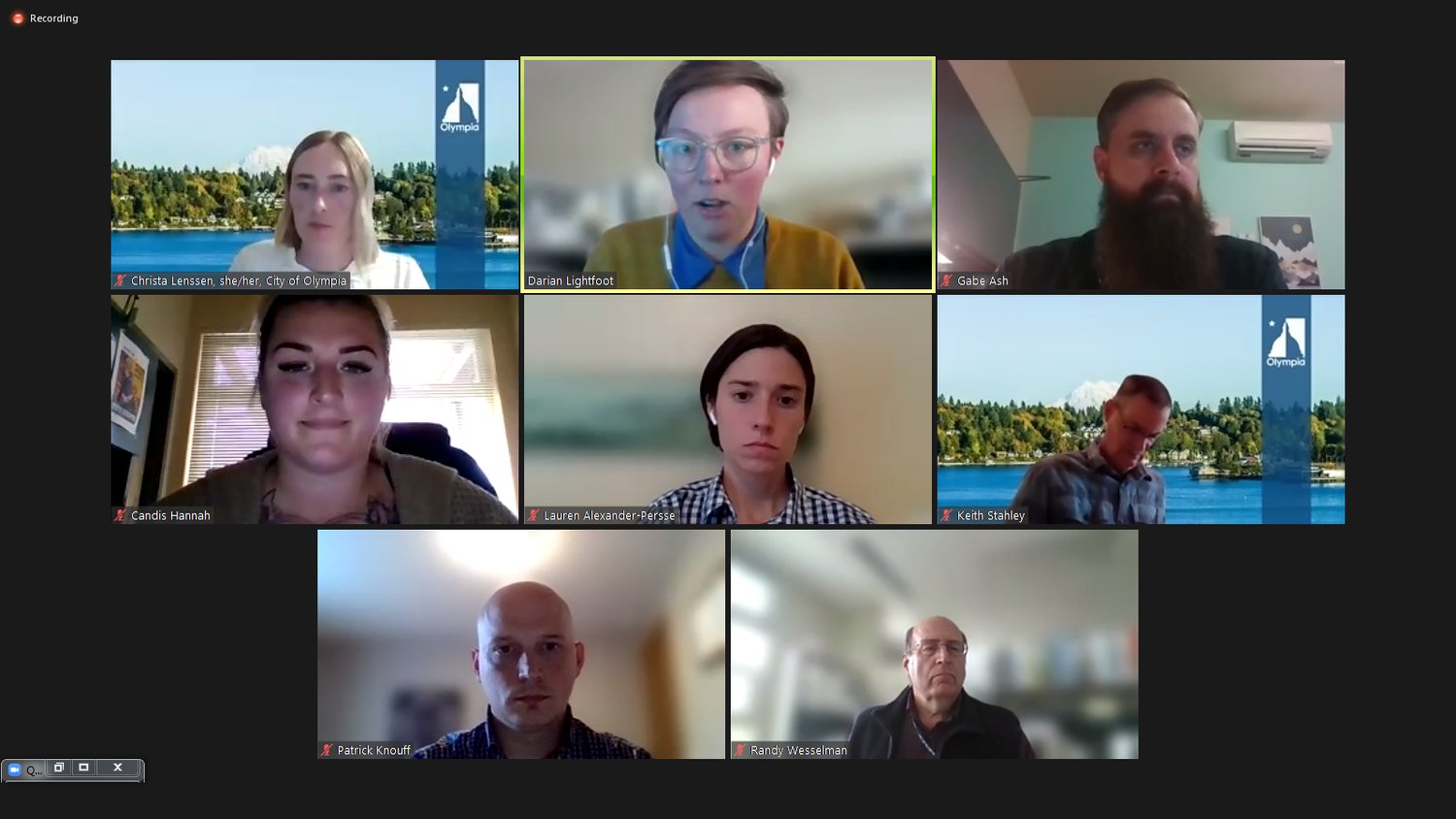 The city previously said “the move is expected to take place in May/June 2022” on its website.

Quince Street Village is set to become the new home for those housed at the mitigation site and will provide 100 small houses for people experiencing homelessness.

People living at the mitigation site, located at the northwest corner of Olympia Avenue and Franklin Street in downtown Olympia, will be relocated to 1211 Quince Street, the former location of the Quality Inn hotel. These details were discussed at Olympia Housing Program’s third public meeting on the subject, which was held on Monday, June 13.

During the meeting, Lightfoot said about 70-90 community members attended online last night, along with this reporter.

In January 2019, Olympia opened the mitigation site at the corners of Franklin and Olympia streets for the homeless. In April 2020, Lightfoot said the city contracted with Catholic Community Services to operate and manage the site.

“Over time, the site has evolved and grown,” she said. “Tiny house units have replaced tents on pallets, plumbed toilets with showers have replaced portable toilets, increased coordination with community services and resource connections, and entry of participant data into the system of homeless management information (HMIS) to track outcomes.”

CCS will continue to manage the operation of Quince Street Village, Lightfoot added.

CCS site supervisor Candis Hannah said he would provide 24/7 staff for the installation. “Our staff are trained in crisis prevention and the implementation of non-violent crisis prevention.”

Among the rules that CCS will implement on the new site, no visitors will be allowed on site, except for case managers or other support professionals.

For fire and safety measures, CCS will prohibit smoking in units, open fires or heat sources not approved by the Olympia Fire Department.

Code of Conduct and Participation Agreement

CCS program director Gabe Ash said everyone who visits the venue must agree to and sign the participant code of conduct, with an emphasis on the health and safety of venue participants, staff and of the neighborhood.

Ash added that residents must also sign the Participation Agreement, which prohibits illegal activity, possession of weapons, violence or threatening behavior on and around the site.

“The Participation Agreement requires individuals to recognize this rule. Violations may result in expulsion from the site. Potential attendees will undergo a background check and may not be admitted if CCS staff determine there is a safety risk to other attendees at the site or neighbors,” Ash said.

The city imposes a similar set of obligations and rules on people camping on Ensign Road near Providence St. Peter’s Hospital.

During the meeting, parents and business owners asked about neighborhood safety and whether there would be a greater police presence in the area.

Deputy Town Manager Keith Stahley assured the community that the police, who have been actively involved in the planning process for the project, will continue to provide services at the site.

Ash said the CCS would hold quarterly meetings with neighbors. “CCS staff work closely with the Olympia Police District and Olympia Fire Department. We will provide a point of contact for site neighbors.

According to Ash, the potential presence of sex offenders is one of the biggest concerns for the church and schools. “We have heard this concern and have taken it very seriously.”

CCS is implementing a new procedure for the new site, Ash said. “We check the [sex offender] registration. If there is an individual [who is on the registry]we might contact someone and find other housing or accommodation options for that person. »

“It is difficult for the people who commit these offences. We don’t allow these people at the moment [at the Quince Street Village]. We try to listen to the neighborhood,” he said.

Ash said they have a variety of sources to work with people with their particular cases, including mental health issues and addictions.