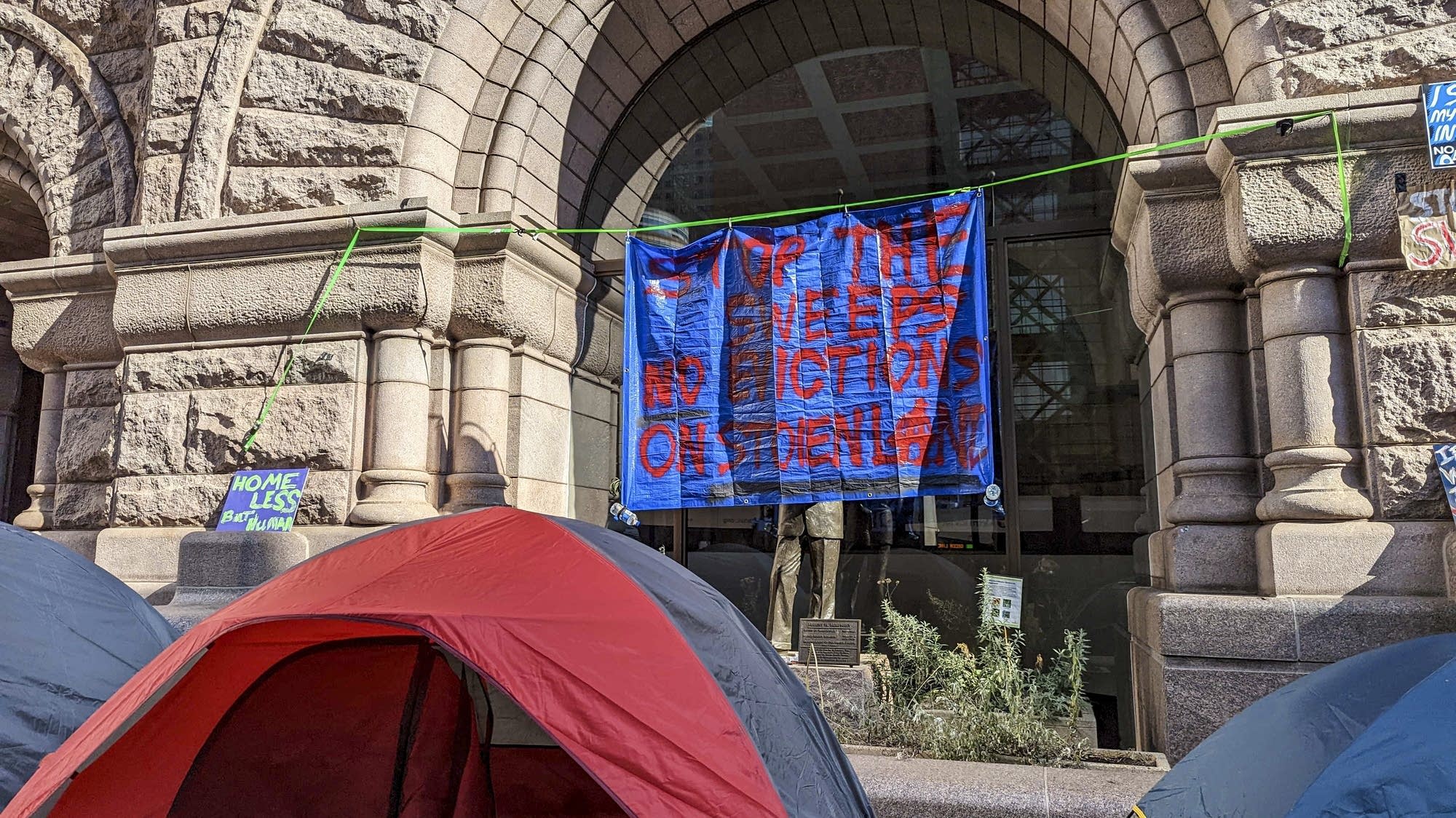 With hands still covered in paint, Melanie Groves walks toward a yellow and blue tent on the sidewalk outside Minneapolis City Hall. A mural on the side of the tent reads: “Homeless, not homeless. It’s my house.”

Groves is one of dozens of activists and homeless people who set up a tent protest camp this week between Minneapolis City Hall and the Hennepin County Government Center. The protest follows two recent evictions of large tent camps in northeast and north Minneapolis in recent weeks.

Residents of the protest camp want the city to declare a moratorium on evictions. Groves said she was kicked out of three sites in the past week. Groves said evictions leave residents with little time to gather their belongings or find alternative housing, and often lead to worse outcomes for people struggling with mental health or addiction issues.

“We are not homeless, when we live in these communities, these encampments, we are homeless,” Groves said. “We may not have a shelter that is more than a nylon tent, but it is important. It keeps us alive. It protects us. And the city doesn’t care.”

Groves started living in a tent about a year ago after her partner had health problems and she couldn’t access any of the supports available. A former homeless advocate, she said the government needed to be more active in helping people find safe accommodation.

“There is no affordable housing here. If there were real affordable housing, there would be no encampments,” Groves said. “No one wants to be here in a Minnesota winter living in a tent, with no water, no food, no access to heat.”

Did you know that MPR News is supported by Members? Gifts from individuals fuel the headlines, clarity and context found here. Donate at the Fall Member Drive to become a member today.

Activists staged the protest on Sunday evening. By Monday morning, it had grown to five tents, a few awnings and banners, including one draped in front of a statue of former Minneapolis Mayor Hubert H. Humphrey, which read “Stop the sweeps. No evictions on stolen land.

Organizers of the tent protest also began collecting supplies on Monday morning to help people survive as temperatures drop. Jamie McCarter occupied a table on Monday morning that was overflowing with donations, including warm clothes, hand warmers and sleeping bags.

McCarter himself recently found himself sleeping on light rail trains after his truck was impounded during a recent eviction from an encampment. He wondered how it made sense for thousands of people to live on the streets in such a wealthy state. Minnesota’s median household income in 2019 was around $75,000, according to the Minnesota Department of Health. That’s more than the nation’s median income of about $66,000.

“I know exactly what it’s like on the street, I know what it’s like not being able to wake up in the morning and brush your teeth and wash your face,” McCarter said. “It’s like, how can you start a new day, if you still have the face of yesterday?”

Minnesota’s poverty rate was 9% in 2019, according to the Minnesota Department of Health. But Minnesota has some of the largest racial disparities in the country, with 31.3% American Indian or Alaska Native and 28.6% Black living in poverty.

Those at the tent protest said they hoped Minneapolis Mayor Jacob Frey would meet with them to hear their concerns directly. As of Monday morning, no one from the mayor’s office or city council members had yet stopped to talk to them.

Raising awareness of the challenges faced by homeless people is another reason why they held the tent protest, Tamera Hoveland said. She said it allows homeless people to tell their own stories about what they are going through rather than relying on social workers or professional advocates.

There is no specific timeline for how long the tent protest could last. Legal observers are on site in case the municipal authorities decide to evict them.

Minneapolis created a homeless response team to deal with encampments. The city said the goal of the effort was to connect people to housing, medical and transportation services. The city’s website also outlines the process staff use for eviction and encampment and offers guidance for property owners.

Across Hennepin County in 2022, an annual count found more than nearly 2,700 people living in shelters, transitional housing or on the streets.