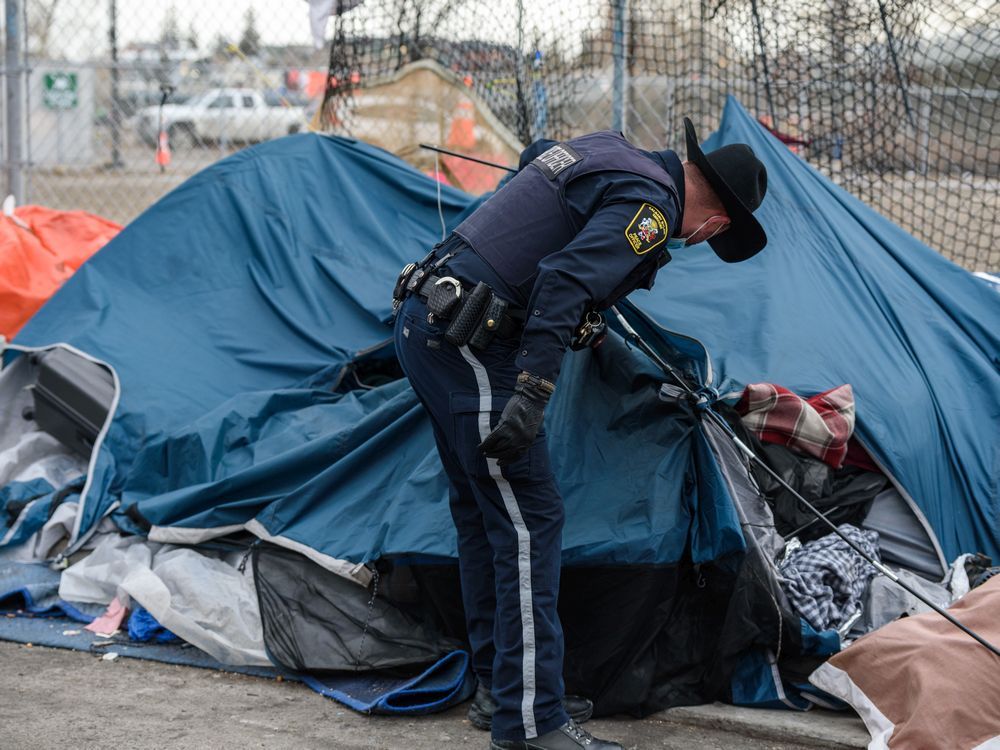 On Thursday morning, city police and bylaws officers moved in and removed a homeless encampment in downtown East Village, which they describe as a long-standing nexus for violence and traffic drug.

The dismantling of the camp followed similar moves in late November that angered Mayor Jyoti Gondek, who said vulnerable Calgarians were being pushed out of the site with nowhere else to go.

But police say the tented camp along Dermot Baldwin Way was a drug trafficking hub which led to numerous violent attacks targeting vulnerable people and the sexual assault of a minor in one of the structures.

They also said the presence of criminals prevented homeless people from seeking services at the adjacent Calgary Drop-In Center for fear of assault.

“Our investigation has shown that a criminal element has entrenched itself along Dermot Baldwin Way. This group has impeded access to the Calgary reception center creating a gauntlet of violence and drug trafficking,” said CPS Inspector Claire Smart.

“The temporary structures were used to store drugs and a significant number of deadly weapons, including machetes, swords, knives, maces and firearms. All of this was used against vulnerable members of the public simply trying to gain access to the Calgary reception centre. 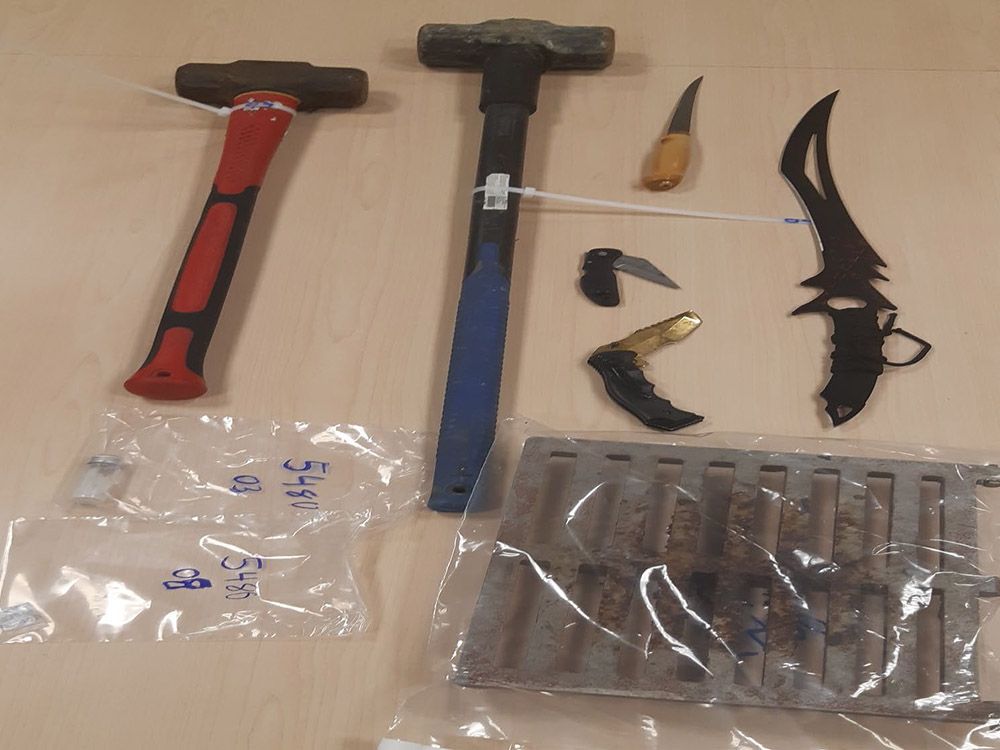 Since Dec. 1, 27 violent encounters have been recorded at the site, the latest in a long history of brutal social unrest that has sickened officers, Smart said.

“Some of these injuries have changed my life – as a police officer for 25 years, it’s disturbing, no one should have to suffer this intimidation and attacks,” she said.

“It has become very volatile and dangerous for everyone, even for (the firefighters) who go there. This can (no longer) happen.

A few hours after the tents began to be removed, the smell of disinfectant lingered in the air as a few people were still packing their belongings.

Most of them said the authorities had to do something about the encampment, although they wondered if it would eventually succeed.

“It’s gotten worse than I’ve ever seen…they can’t let it stay and be like this,” one man said.

“But it will be the same process.”

He and another local man said a friend of theirs was seriously injured in a machete attack at one of the tents earlier in the week.

“I saw him come out of a tent,” said the man, whose name was West Coast.

The history of trouble in the area goes back years and has led to several police operations to stop criminal activity.

Following an investigative operation dubbed Bloodline, on November 4, 2020, police searched vehicles and four residences across the city, seizing drugs and nearly $35,000 in cash.

They also arrested the alleged leader of the drug trafficking gang dubbed The Family, Lawrence Chukwka Orubor, then 52, who police describe as a ruthless crime lord.

He is accused of having instructed drug trafficking and violent crimes for a criminal organization, as well as other related offences.

City police at the time called the move a blow to drug-related crime and violence, but problems in the area quickly returned, leading to the launch of Operation East Side last December. which culminated in Thursday’s actions.

This operation since December 1 has led to 12 arrests and 71 charges, and police say more are to come.

The site generates more calls to the police than any other location in the city, the CPS says.

“Violence will not be tolerated in our city, period. Our goal with this collaborative law enforcement and response initiative is to create a safe space for people to access the services they need,” Smart said.

Some on the streets said members of The Family were still present, prompting one man to say ‘I’m going to shut up about them’.

Nearby, a man verbally threatened a passerby for money he owed him.

Two men, including West Coast, brandished stab wounds they say were sustained inside the reception center in recent weeks.

“Inside it can be dangerous too,” said Daniel Ellis, 58, who was nursing an arm injury.

In early December, just as Operation East End was beginning, this reporter visited the tent camp and witnessed open drug dealing and people collapsing on the sidewalk after consuming narcotics.

Many said they had been kicked out of the reception center for fighting with other clients.

Some condemned the removal of their tents and the ransacking of their belongings, but on Thursday Smart said officers were doing their best to minimize those losses.

Police say they are working with social agencies to bring long-term stability to the area and prevent the lawless camp from reestablishing itself by using constant surveillance and patrolling.

“It’s something we have to do as a collaborative approach – we couldn’t get away with it,” Smart said.

But Smart said many of those arrested on the streets in the past have returned to resume their criminal activities, and there are no guarantees this will not continue, but added that police will work with prosecutors in the Crown to minimize this.

Police say the turf is extremely lucrative for drug dealers who prey on the homeless population.

Of those at the encampment on Thursday, some were believed to be innocent members of the homeless community, including 22 who were sleeping at the reception center and 16 seeking transitional housing, the facility’s executive director said, Sandra Clarkson.

The situation on Dermot Baldwin Way, which was often obstructed by up to 30 tents or other shelters, had become intolerable with threats and acts of vandalism directed at its staff, she said.

“It was becoming a very concerning situation,” Clarkson said.

A man named Charles, who was queuing to enter the reception center for a meal, said there was still a long way to go to house the homeless.

“We are human beings – it’s just that a lot of people have nowhere to go,” he said.

Sign up to receive daily news from the Calgary Herald, a division of Postmedia Network Inc.

Thank you for your registration!

A welcome email is on the way. If you don’t see it, please check your spam folder.

The next issue of Calgary Herald Headline News will soon be in your inbox.

We encountered a problem during your registration. Try Again