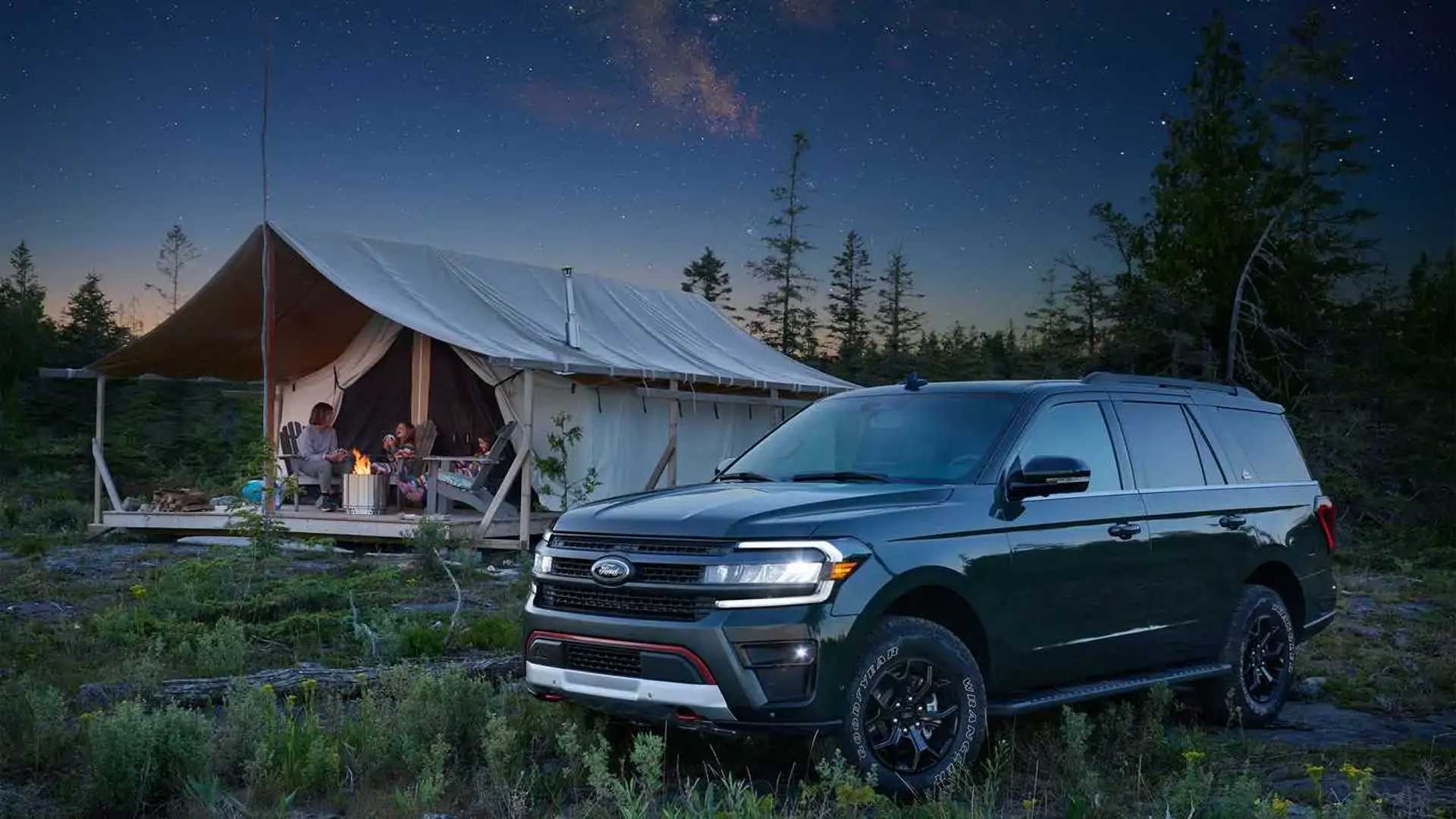 As a publicity photographer, it’s important to make sure you update your portfolio with work you’re passionate about. It’s equally important to have projects in your book that free a creative director from the work of imagining their customer’s product traded on the spot. So I decided to create another automotive-type lifestyle/adventure project, because photographing cars and people is my passion.

A friend of mine owns fifty acres of land east of the Mackinac Bridge in Michigan’s Upper Peninsula. I thought it would be a great place to stage the adventure shoot. Because it was a personal project, I didn’t want to pay models to travel and pay more for their accommodation and meals, so I forced my family to accompany me as my talent. My two seven-year-old daughters have never been camping, and fifty acres of pristine wilderness on the shores of Lake Huron would be a hell of a place to have their first camping adventure. My wife, Whitney, isn’t really a camper, but she’s a good sportswoman.

For the vehicle, I just wanted something that made sense sitting on the rocky beach of Lake Huron with the beautiful canvas platform tent in the background and hopefully a starry sky above. Seyth Miersma suggested the new Ford Expedition Timberline. I said, “What is that?” Despite the name, I never thought of the Expedition as an adventure vehicle, but in the Timberline version, it makes that point.

With dark green paint, blacked-out wheels, knobby tires and orange accents on the front fascia and green leather seat stitching, it looks the part. I was actually surprised how much I liked how it looked parked on the street in Midtown, Grand Rapids. Gross nonsense. I knew it would look even better in da UP

The Expedition, with the third-row seats folded down, was everything we needed, which was a little surprising. The only items we packed that weren’t on the original checklist were two landowner bags, one with a rolled up queen size air mattress and the other with its bedding. The two important catch-alls. With my camera gear, our usual two-night clothes, and a cooler, we could barely do the groceries we bought in Cedarville, 8 miles from camp. Whitney had to walk the last 8 miles with a pile of firewood on her knees.

What the Expedition lacks in storage, it makes up for in passenger space. Everything is bigger and more distant. My kids loved having the extra bedroom – our usual daily drivers are a couple of Outback wagons and a Toyota 4Runner. Whitney said she felt like she was riding a school bus and I felt like driving one. The thing is great. Like, really big. And on the highway, it feels like the aerodynamics of a brick. But, overall, the Expedition is a really nice space for a long road trip.

Seats are comfortable, infotainment is easy to use, screen is huge (one of the only times I didn’t mind a screen this size), rear charging ports were a luxury for my kids, and the B&O sound system was loud enough to drown out sounds from their tablets — as well as road noise from the Timberline trim’s agro tires. I get why people want these big things. Once we crossed the bridge, the rugged Ford fit right in. We comfortably arrived at the gate of the property after four and a half hours, still in good spirits.

Through the gate we found ourselves on a gravel road, perhaps a quarter mile long, that leads into the heart of the property. The road ends and becomes a kind of two-lane track, lined with dry logs on each side, at the mouth of which is a dark metal wagon to transport your belongings in several trips to the platform tent after abandoning your car or your crossover, who dares not go further. But we had the Timberline trim. All we needed was the cart we were driving.

The truck navigated the roots and rocks of the trail with ease and I immediately started having fun. The girls were laughing behind their backs with the kind of excitement you get when something you’re doing seems wrong, but dad is doing it, so that’s good. The four speeds of the two-speed transfer case were enough to get the big hunk of metal and technology over rocks and branches, and I didn’t even bother with the different drive modes.

In a short time, the tent appeared. We parked right behind and drove off. The truck looked appropriate sitting among the rough pines and shrubbery, unfazed. The girls asked apprehensively if they could go play after surveying the beautiful scenery. I told them there were 50 acres there, that as long as you could hear them if they were in the woods or see them if they were by the water, they were free to go to the adventure. They left.

The main image I needed was of the truck parked on the rocky beach, so I had to make sure I could get it there. It was certainly less simple than the two ways. There were a number of rocks higher than the truck’s ground clearance that would undoubtedly damage the underside of this $70,000+ truck. I wish I had known about the Expedition’s Trail Turn Assist feature back then as it probably would have helped through some of the tight corners I had to do, although I may have been too nervous to use it on the rock surface.

I dropped the T-case in low range and worked my way down, keeping the paint unscathed. The 360-degree camera system proved useful, although it kept going into trailer mode unprovoked, which was frustrating. With little effort and without too many events, the expedition found its way to shore, where it seemed tailor-made for its rugged and remote environment.

After an hour of test shooting, I took the Timberline back to the tent. I made a fire pit by the water and built the girls’ first campfire so we could cook their first hot dogs and campfire roast s’mores. Shortly after lighting the fire, we realized that the hot dogs were the only thing we forgot to pick up from the convenience store. I jumped in the Expedition, took the small dirt road and jumped on the highway. Aware of gas prices and this truck’s propensity to burn it – it’s EPA rated at 16 miles per gallon city, 19 highway and 17 combined – I drove the 220 miles to camp with an eco-foot.

But I had starving kids starting a fire and a 16-mile round trip ahead of me, so I dropped the hammer on the deserted highway up north. I was surprised by how aggressively the 3.5-liter twin-turbo V6 bounced off the tall pines and even more surprised by how its 440 horsepower and 510 pound-feet picked up the monster and pushed it forward. before. I bought the meat tubes and had a great time on the way home with the windows down, enjoying the crisp northern air before watching our girls annihilate an entire pack of hot dogs and three s ‘more each.

As planned, we spent the next day photographing the truck and venturing around the property. What made me happiest about this trip was the fact that my kids wanted – no, loved – to be outside on this earth. They wanted to climb the rocks, discover the forest and play in the water. I think they even forgot they were there to be talented for my project and just acted natural on camera. They didn’t even mind defecating in a bucket with a toilet seat on it. In fact, I think they rather liked that part. That night, Whitney and I sat on the porch with drinks and were vividly reminded of the beauty of the Milky Way.

The next morning we parked the truck after some photos on both trails before the sun got too high, then headed back to the bridge and south after a quick lunch in Mackinaw City – towards Grand Rapids. The more time I spent with the truck, the more I liked it and the more meaning it made. As popular as those “outdoor lifestyle” packages have become, this one is more than a badge and colorful trim. Truly, it was the perfect vehicle for our adventure.

It contained all my camera gear and our night gear and camping gear, plus a few unexpected bags; it was a very comfortable and pleasant place to spend the approximately four and a half hours there and back; and it has the authentic off-roading to effortlessly carve its way over rocks, roots and ruts to the wild rocky beach of Lake Huron. There’s even some really fun straight-line speed.

The truck has its flaws. Road noise from these tires isn’t terrible, and the lane-keep assist was among the worst I’ve used. But, the more I thought about it, I couldn’t quite come up with anything I’d rather have for this type of adventure. And I’m sure none of them have green leather seats. I looked in the rearview mirror with a smile at my two comfortably sleeping kids who had rioted on their first camping trip, thinking how great it would be to do it again — and already missing the Expedition Timberline.