Patriots training camp report: Easy does it on the eve of joint training with the Panthers 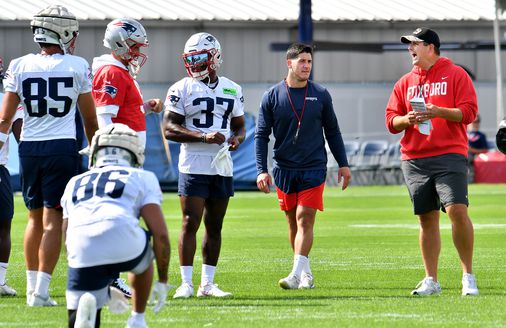 Monday’s practice featured several non-competitive sessions as coaches went through game-like scenarios and situations that will be put to the test against Carolina.

“Individual games are good,” said the coach. “We have been working against each other for a long time, so the new individual matchups, the patterns are different. We’ll see different X’s and O’s, but also maybe techniques on how guys rush on passes or on routes or things like that. And, I would say, less predictability of practice.

Delivering exclusive Patriots and NFL analysis and commentary straight to your inbox, three times a week during the season.

DB rookie Devin Hafford made his training debut after signing on Sunday night. He wears number 43.

Nelson Agholor made a good move to gain just a bit of separation on Adrian Phillips before one-handedly grabbing a deft endzone fade pass from Mac Jones during a full team half-speed rush (yes , it sounds like an oxymoron, but it is true).

Earlier, Agholor grabbed a touchdown on another fade from the end zone. To celebrate, he flipped the ball over to DeVante Parker, who passed it back to Jones, who pinned it at the Gronk.

▪ Bailey Zappe had some nice fades in the end zone against Matt Sokol and Tyquan Thornton in a late 11-on-11 period. Jabrill Peppers blocked a third Zappe shot.

▪ Peppers also caught an interception after a Jones pitch deflected off the hands of Hunter Henry.

▪ Jonnu Smith made a diving catch on a curl-in on goal, prompting a defender to shout “OPI!” from the sideline. Looks clean from this point of view.

▪ Rookie corner Jack Jones had a pass breakup for what looked to be the 100th straight day.

▪ Thornton stretched to catch a through pass from Brian Hoyer, although he couldn’t stay in bounds as Wade was on his hip. Still, very good follow up from the fast rookie.

▪ Belichick watched some of the early 11-on-11 periods from a deep safety point. The coach had a quick first step to avoid being involved in a deep pass from Zappe.

▪ Yodny Cadjus, who was treated in the medical tent in Thursday’s game against the Giants, gave it his all and took reps at right tackle with Wynn out.

▪ Mac Jones made a lot of side throws during the special teams periods. One session included practicing his “runaway” throws as he played catch with Zappe. Jones and Zappe also pitched after practice.

▪ Tristan Vizcaino was 3-for-3 on field goal attempts, with his long coming from 45 yards.

▪ Tight end Devin Asiasi was serenaded with ‘Happy Birthday’ despite being a day late.

▪ A sloppy day for the chain gang, who took a long time to change down and distance markers, causing some game delays.