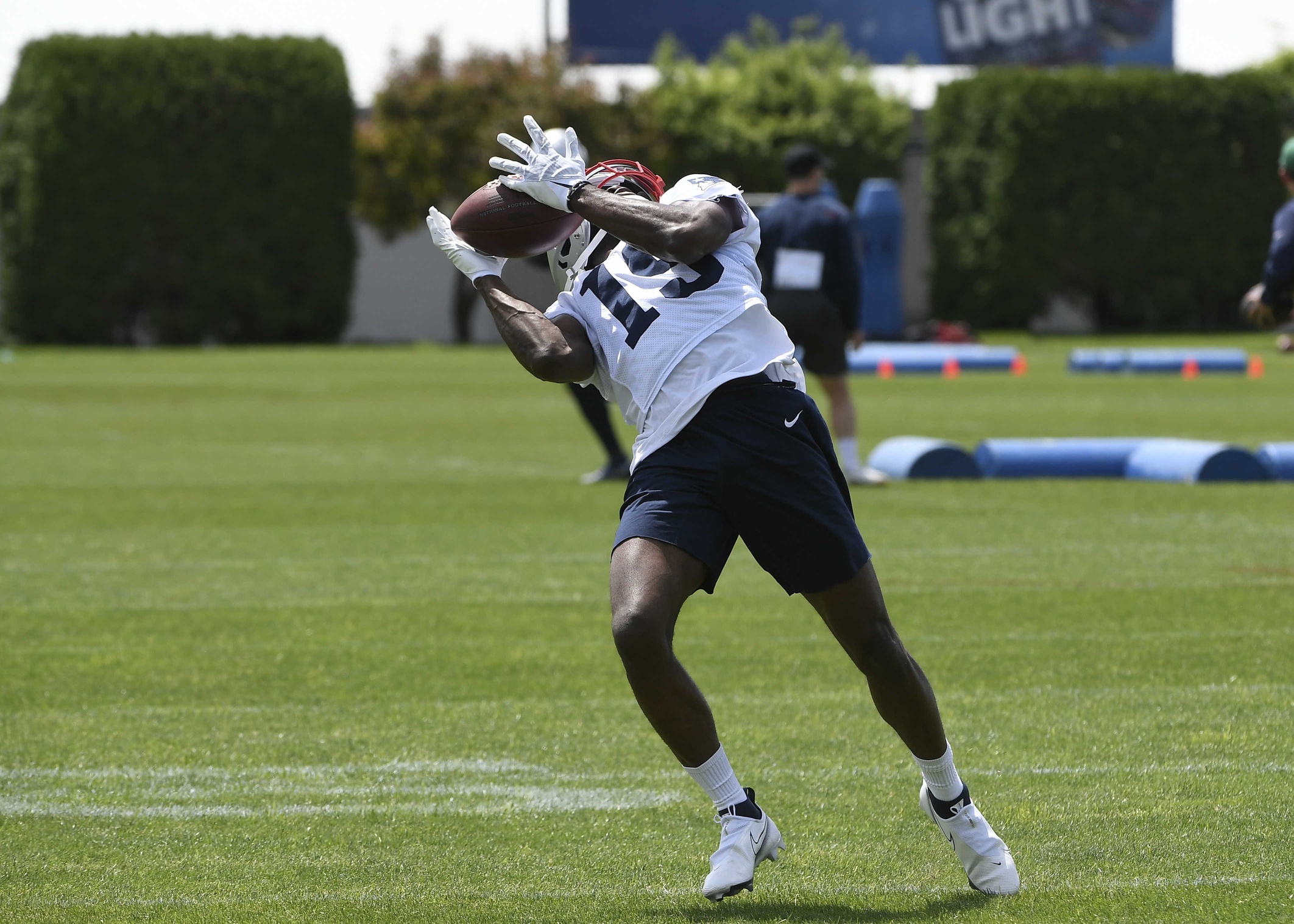 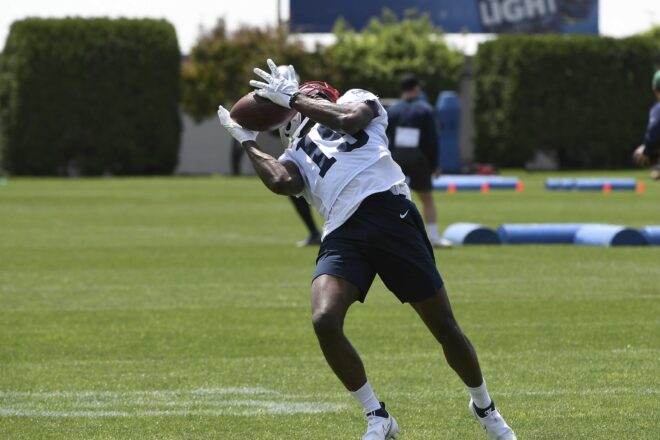 The New England Patriots wrapped up training camp with a final joint practice with the Carolina Panthers on Wednesday before their preseason game on Friday.

Like Tuesday, the two teams again found themselves in a brawl as two separate scrums unfolded.

The first fight came after Panthers defensive back Kenny Robinson landed a significant blow on Patriots wide receiver Kristian Wilkerson during a kickoff/return drill. Wilkerson had to be taken away and was later diagnostic with a concussion.

PFF’s Doug Kyed reported On Wednesday night, Wilkerson “will likely miss some time with a head injury, but further tests from the medical establishment came out clear.”

Although the shot was deemed clean by a few Patriots, notably Matthew Slater, it was the Panthers’ postgame celebrations, particularly Robinson’s sanding on Wilkerson, that sparked anger.

“When you see a teammate on the pitch… I’ve been in this game for a long time, and I think anyone playing at this level understands when a guy is out. They know what it’s like, and I don’t think now is the time to celebrate. I really don’t know,” Slater said. “I don’t have a problem with the shot. I didn’t see it, but I think it was clean, from what I understand.

Just minutes after the first skirmish ended and the teams returned to drills, Deatrich Wise hit Christian McCaffrey as he went out of bounds, leading to the Panthers players pushing Wise into the stands and on a fan. Wise’s actions led to an expulsion from the practice.

“My thoughts are with the woman who was injured there. Hope she is well,” Rhule said. “We sent Kenny off the field. “I saw standing over the player. That’s not how you want to train. Things happen in football. There were good hits, but we don’t stand above- above them to taunt them – it might affect their livelihood so we fired him Officials fired Chuba… They said he punched.

As for the football itself, the Patriots’ passing game looked solid for the second day in a row.

Mac Jones finished the practice completing 11/15 passes in 11-on-11 drills and 5/7 in 7-on-7 drills. The offense finished the morning with a touchdown and a 2-point conversion in two minutes.

Jones threw two 25-yard touchdown passes, one to Jonnu Smith and one to Nelson Agholor, on both snaps immediately after the second fight.

On the defensive end of the ball, Jalen Mills continued his dominating side, making the play of the day after intercepting Sam Darnold on the 2-minute drill while covering for DJ Moore. All sightings throughout the summer point to Mills becoming the top corner heading into the regular season.

You can see more of the best moments from the last open session of training camp in the social media posts below.

Jalen Mills opens the 1v1 with a PBU, then Myles Bryant catches an INT during the 2v2. #Patriots back defense today.

Jalen Mills picks up where he left off yesterday. Broke a pass to DJ Moore on the first 1-on-1 rep and beat Moore in another rep

Good catches challenged by Jakobi Meyers and Ty Montgomery. Montgomery was a one-hander.

Both teams are working in the red zone.

Kenny Robinson, who was kicked out of practice for fighting Kristian Wilkerson, just lighted Wilkerson in a comeback drill. It looked like he had knocked him out.

Kristian Wilkerson is on the pitch after being hit by Kenny Robinson during a throwing drill. These two were kicked out of practice yesterday for fighting.

O yes, we have something going on here pic.twitter.com/DQvgP01Yp5

Lots to sort through here…

The two teams huddle separately. These joint practices are on the verge of becoming unproductive. Teams can’t find the midpoint.

On the first play of the fight, Mac Jones hits a Jonnu Smith for a touchdown on Jeremy Chinn. It lit up the Patriots sideline

All hell broke loose near the stands. Punching and shoving. The players on the far field ran to the other field. This happened shortly after Wilkerson fell in another period that led to breakouts. The Pats players weren’t happy about that; carried over to next period

A first to Jonnu Smith on a corner drive that went down inside the five, then a perfectly lifted touchdown to Nelson Agholor, who beat two defenders for the ball before going out of bounds.

Wow. Crazy scene at #PatsCamp. Big fight between #Panthers and #Patriots. Fan appears to have been injured in the fight. 2/x pic.twitter.com/Bfaxv7MJKs

Two duels today with the Patriots and the Panthers

🏈 WR Kristian Wilkerson falls on knockout return. Differing opinions in the media tent whether it was the result of a hit or no contact… some Pats seemed to take issue with Panther standing over him.

🏈 Christian McCaffrey takes a hit out of bounds. Throw the ball at Pat. Big dusting.

Game of the Day Candidate: Marcus Jones deflects a short throw from the sideline to himself during the red zone drill, catches it and stomps inbounds for an INT.

Game of the Day: Nelson Agholor just caught a 20-yard TD from Mac Jones in double coverage. Neither Jaycee Horn nor Myles Hartsfield turned around and Agholor jumped through them.

Highlight play: Mac Jones to Nelson Agholor in an 11-on-11 red zone drill, with Agholor jumping to beat double/triple coverage in the right corner of the end zone. Nice adjustment to the ball in the air by Agholor.

Jalen Mills intercepted Sam Darnold and kicked the ball in the air. The Panthers players didn’t seem to like it.

Jalen Mills intercepts Sam Darnold’s side pass to DJ Moore on the first snap of Darnold’s 2-minute drill and throws the ball in celebration.

Mills looked like a real stopping CB in training camp.

Matthew Slater explains why he was upset with the reaction of some Panthers players after the hit on Kristian Wilkerson that sparked today’s brawl pic.twitter.com/qNArTYC3gb

“We’re just trying to achieve the standard that we set for ourselves.”

Patriots players in the last two days of joint practices with Carolina. pic.twitter.com/7KRAmdYL17