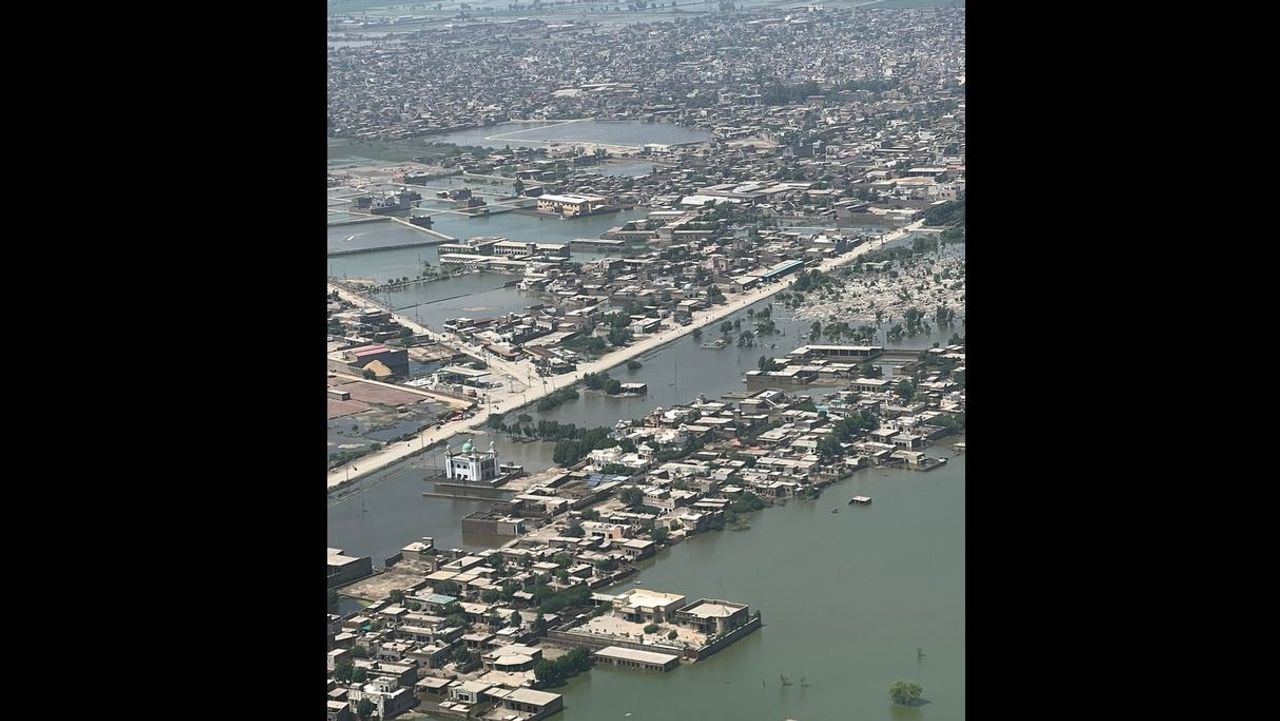 Unprecedented floods – resulting from and clearly linked to climate change – continue to ravage Pakistan, with the official death toll rising by more than 250 since last week.

1,391 people are believed to have died from the floods, which inundated a third of the impoverished country in South Asia. 12,700 others were injured. On Friday, Pakistan’s National Disaster Management Agency reported that 36 new deaths had been recorded in the past 24 hours.

The official number of dead and injured is widely acknowledged to be a gross undercount, as many areas remain totally isolated due to the destruction of hundreds of bridges and other infrastructure. Additionally, there is a growing threat of infectious diseases.

More than 33 million people, or one in seven Pakistanis, are variously described as displaced, homeless or directly affected by the floods. Among them are 16 million children.

Even before the devastation caused by the floods, nearly half the population was considered food insecure. Millions of people are now forced to live in makeshift shelters or poorly maintained camps. Due to the lack of emergency supplies at these sites, many people are sleeping in the open.

Flood survivors face shortages of food, drinking water and sanitation supplies. The lack of toilets forced camp residents to defecate outdoors in surrounding areas. Children and pregnant women are the most affected by these unbearable conditions. According to the United Nations Population Fund, there are 650,000 pregnant women among those affected by the floods, of whom 73,000 are expected to give birth this month.

The lack of adequate sanitary supplies has created ideal conditions for the spread of infectious diseases. Skin infections and stomach flu, which are spreading widely among camp residents, have been attributed to the unavailability of toilets. Over 134,000 cases of diarrhea and 44,000 cases of malaria have been reported in Sindh alone. Other mosquito-borne infections are also spreading, with Karachi reporting 1,265 dengue fever cases in August and 347 cases in the first five days of September.

There is virtually no coordination of rescue efforts to locate people stranded by the floods. Relief efforts, largely entrusted to the armed forces, are also not commensurate with the scale of the crisis. 81 of the country’s 160 districts have been affected by the floods, and with heavy rains forecast for the next few days, a rapid receding of flood waters is unlikely.

The National Flood Response Coordination Center (NFRCC) reported on Wednesday that the military had conducted 20 helicopter sorties in the previous 24 hours, rescuing 217 stranded people while delivering 30 tons of relief items to affected areas. The navy and air force also conduct rescue and relief missions, but on a smaller scale.

Despite a slight drop in water levels in recent days, Lake Manchar, the country’s largest freshwater lake, is under constant threat of overflowing its shores, which could lead to massive loss of life. To avoid such an outcome, several planned breaches were made in the lake, which is located in the central part of Sindh province. As expected, the breaches flooded many nearby villages and forced the evacuation of several hundred thousand people. On Wednesday, officials in Bhan Syedabad issued an evacuation alert to 150,000 residents and 10,000 displaced people who had sought refuge there.

The provincial government of Balochistan, the country’s poorest and least developed province, has labeled 32 of its 34 districts as “disaster” as of September 1. Khyber Pakhtunkhwa province in the north is also badly affected.

Floods are feared to wash away the ruins of Mohenjo-daro, one of the world’s most important archaeological sites, which dates back to 2,500 BCE. Floodwaters have yet to hit the site, but it has been damaged by the unusually heavy rains, with several walls collapsing. The center of the Harappan or Indus Valley civilization, Mohenjo-daro has an elaborate ancient drainage system that helped it survive previous floods. The site is considered the best preserved ancient urban settlement in South Asia.

On August 30, the United Nations issued an urgent appeal to member states for $160 million to provide flood victims with food, shelter and medical supplies. Despite the massive humanitarian crisis, even this meager amount was not collected in the week and a half that followed.

The top priority of Pakistan’s caretaker government, led by a coalition of big business Muslim League Nawaz (PML-N) and the People’s Party (PPP), is to limit spending to limits specified by the International Monetary Fund, as part of a Loan Bailout.

To date, the government has allocated just 70 billion rupees, or US$314 million, in cash to the more than 33 million flood victims, many of whom have seen their homes, crops and livestock destroyed.

The floods were preceded by extremely high temperatures in March and April, which regularly exceeded 45 degrees Celsius (113 degrees Fahrenheit) and in some places 50 degrees. This was followed by an early start to the monsoon season and rainfall that was three to eight times above average in July and August. Prolonged heat waves have accelerated the melting of long-term glaciers in the Himalayan and Hindu Kush mountains. This has triggered a phenomenon known as glacial lake flooding, as large bodies of water formed by melting glaciers suddenly overflow their makeshift banks and rush down mountainsides to flood lower areas. In addition to deadly flash floods, overflows from glacial lakes have triggered devastating landslides.

Dr Fahad Saeed, the “regional manager for South Asia” of Climate Analytics, an international climate science and policy analysis organisation, told the BBC that the devastating floods in Pakistan are “absolutely a warning sign.” ‘alarm’ to governments around the world. “All of this is happening as the world has warmed by 1.2 degrees Celsius. Any more warming than that is a death sentence for many people in Pakistan.

Ahead of his September 9 visit to Pakistan, United Nations Secretary-General Antonio Guterres spoke of the continued unwillingness of world powers to respond to climate change. “There is a lot of attention,” António Guterres said of the war in Ukraine. “But people tend to forget that there is another war – the war we are waging against nature, and nature is fighting back, and climate change is accelerating the destruction of our planet. Dealing with climate change, which is the defining issue of our time, with a status quo approach is pure suicide.”

Such purely rhetorical protests fall on deaf ears from the great powers.

Guterres did not mention that the United States is the leader in sabotaging an effective response to climate change. This week, Washington pledged $30 million to help victims of climate change in Pakistan, less than a dollar for each person affected. This pitiful sum pales in comparison to the tens of billions of dollars in military aid the United States has given Ukraine to expand a war against Russia that has already killed tens of thousands on both sides and threatens trigger a catastrophic nuclear conflagration.

The Pakistani government last week estimated flood damage at $10 billion, but that figure has been revised significantly upwards as the scale of the disaster becomes more apparent. Its new estimate is $30 billion, more than 60 percent of Pakistan’s $47 billion national budget. According to the Pakistani authorities, more than 5,700 kilometers of roads were damaged, more than 240 bridges destroyed or rendered unusable and more than a million homes washed away or seriously damaged. According to UNICEF, 18,000 schools have been damaged or destroyed.

The Food and Agriculture Organization of the United Nations reported on August 29 that almost 80% of crops in Sindh, the country’s second largest province, have been destroyed. Among the most affected is the cultivation of cotton. Raw cotton is Pakistan’s third-largest export product and is vital to Pakistan’s textile industry, the country’s largest export source.

The destruction of crops will also drive up food prices, under conditions where Pakistan, like other countries around the world, is battered by energy and other price hikes. Earlier this month, the Pakistan Bureau of Statistics announced that the inflation rate had reached a record high of 45.5%.

The main driver of inflation came from the removal of subsidies on energy products, which caused prices to skyrocket. Under a deal with the IMF, which released a $1.16 billion loan tranche to Pakistan last week, the government is required to raise gasoline prices by a further 53 percent. Moreover, according to Dawn, he undertook to relaunch the general tax on the sale of petroleum products and to reduce other price subsidies. The gas price hike alone is set to generate 786 billion rupees in additional revenue for the government, more than 10 times the amount Islamabad has pledged to support the tens of millions of flood victims.

Meanwhile, flooding in Pakistan is disrupting Afghanistan’s food supply, worsening the catastrophic humanitarian crisis in the landlocked country. There are also 1.3 million Afghan refugees living in Pakistan, of whom 420,000 are estimated to live in the areas most affected by the floods.