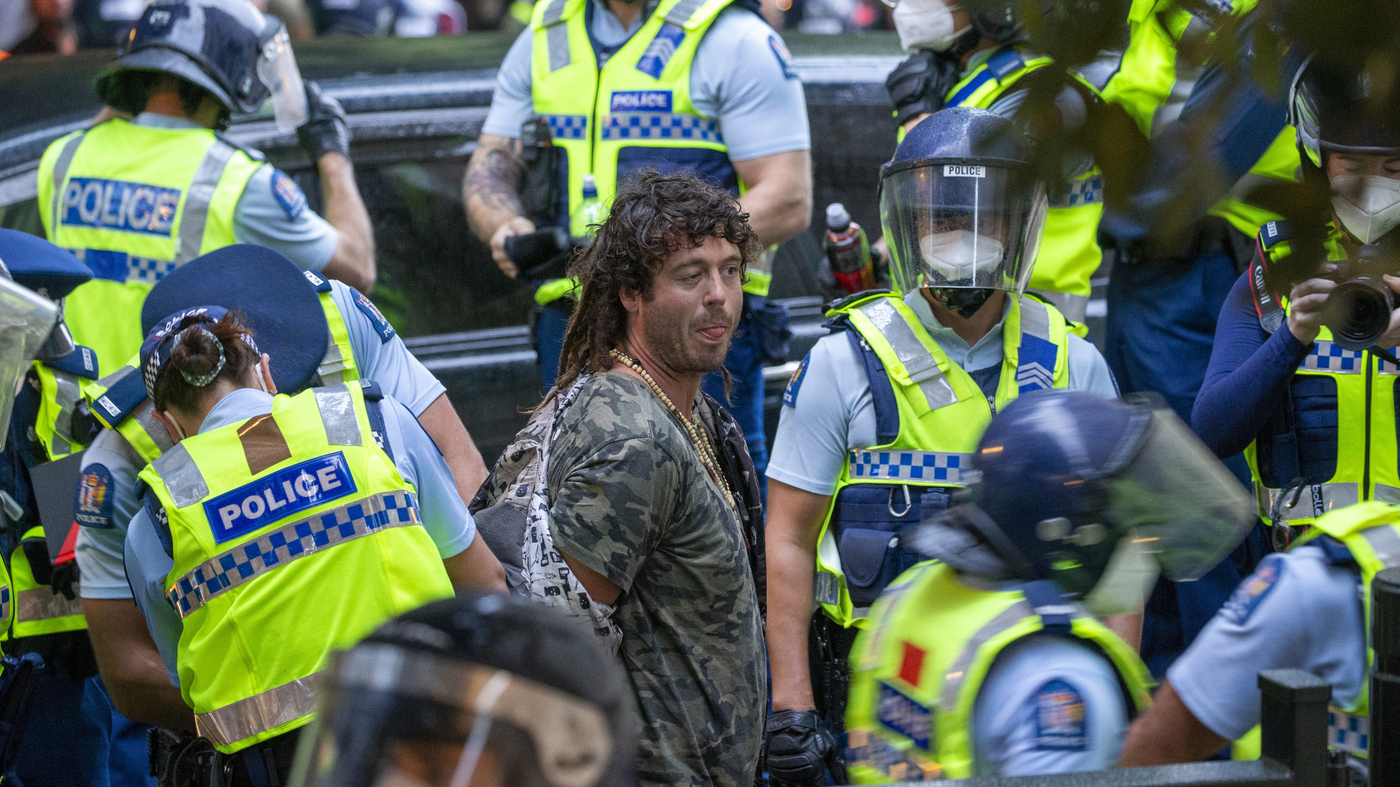 A protester is arrested during a protest against coronavirus vaccination mandates in Wellington, New Zealand on Wednesday.

A protester is arrested during a protest against coronavirus vaccination mandates in Wellington, New Zealand on Wednesday.

It seemed like a final act of defiance as police dismantled the camp protesters first set up more than three weeks ago. Police regained control of the parliament grounds although dozens of protesters remained in nearby streets, some throwing objects at police. The once neatly maintained Parliament grounds have been left scarred, a children’s slide in ruins.

New Zealand Prime Minister Jacinda Ardern said when planning the operation, police had expected hostility, resistance and violence – but witnessing it was another thing .

“I was both angry and deeply saddened. To see parliament – your parliament, our parliament – desecrated in this way and a children’s playground destroyed by a small group of illegal protesters,” Ardern said. “But, as I said, it’s not something that will define New Zealand’s response to this pandemic.”

Earlier, police wearing riot gear and using pepper spray moved towards hundreds of protesters who occupied the grounds and surrounding streets. Police efforts in the morning focused on the outskirts of the protest before turning to the main camp in the afternoon.

It is the largest use of force to date by authorities against protesters, who oppose coronavirus vaccination mandates. As protesters retreated in the afternoon, they threw objects at several fires, which police eventually doused with garden hoses.

The operation began at dawn when police began telling protesters over loudspeakers that they were encroaching and that they had to leave, while officers demolished tents in areas outskirts and a police helicopter flew over. Some protesters clashed with police and used milk to try to get pepper spray out of their eyes.

Police also towed away some of the approximately 300 cars, vans and trucks protesters used to block streets. The convoy protest was inspired by similar protests in Canada and sparked other protests in New Zealand.

Police Commissioner Andrew Coster told reporters they had brought in several hundred additional officers from around the country for the operation, which would continue until all vehicles and tents were gone.

Coster said some protesters sprayed fire extinguishers and threw paint at officers as they advanced, and others used makeshift shields and barricades. He said a laser pointer was aimed at the police helicopter.

By evening, police reported towing around 50 vehicles and another 30 had left. They had arrested 65 demonstrators for trespassing, damaging and carrying weapons. And three officers had been treated at a local hospital for non-life-threatening injuries.

Coster said officers decided to move in because previously constructive talks with protest leaders were not progressing and many genuine protesters had left and been replaced by people more concerned with a violent confrontation.

“I was very clear about our approach, which was to defuse. No one here has any interest in turning this into a fight,” Coster said. “However, this protest has tipped the balance and now it must end.”

Protesters said in a statement they were united in wanting the mandates dropped and in making their own informed choices about their health, without coercion or punishment. They said the vast majority of protesters behaved well and chose to camp as a last resort after other dialogue options were cancelled.

The protests have led to a more charged political atmosphere across New Zealand. Ardern’s security details have been increased after protesters heckled her at events, including as she left a school visit to Christchurch last week.

Ardern said Wednesday that the protest was fueled by misinformation and conspiracy theories. She also pointed out that COVID-19 had spread during the protest and that some protesters had been hospitalized.

Lawmakers from all parties had refused to meet with the protesters.

Last week, a protester drove a car towards a police line, narrowly avoiding officers, and police said some of the protesters threw human excrement at them.

Prior to Wednesday’s operation, police had arrested 132 protesters and brought various charges against some of them.

Protesters were well organised, setting up tents on the lawns outside Parliament and trucking in portable toilets, crates of donated food and bales of straw to put down when the grass turned to mud.

They even dug a vegetable patch, set up a daycare tent and set up makeshift showers signaling their intention to stay for a long time.

At one point, Speaker of Parliament Trevor Mallard turned on the sprinklers and blasted out Barry Manilow tunes in a failed effort to get them to go away.

New Zealand is experiencing its biggest outbreak since the start of the pandemic as the omicron variant spreads. On Wednesday, health authorities reported a record 22,000 new daily cases.

Ardern said she plans to start easing virus mandates and restrictions once the peak of the omicron outbreak passes.

About 77% of the New Zealand population is vaccinated with two doses.

Since the start of the pandemic, New Zealand has reported fewer than 100 virus deaths among its population of 5 million, after imposing strict border controls and lockdowns to stamp out previous outbreaks.