Memories of the annual Hertfordshire school camp at Cuffley

June brought the prospect of saying goodbye to parents for a week and joining my Holy Rood class in Cuffley’s coach for the annual Hertfordshire school camp. Others have written about the memorable experience – one way or another – so here’s my pennyworth.

In many ten or 11 year old minds, including my own, the overall anticipation and excitement went hand in hand with the prospect of an actual Enid Blyton Famous Five adventure. As for the actual camp experience, well, who could forget that? It was the timid first step to finding one’s bearings, living with other people beyond family as part of a community, and learning about camping and the various tasks that entailed, such as collecting and sawing wood, lighting fires and preparing meals.

Mid-June was a peak time at Cuffley Camp on Carbone Hill. The site covered approximately 90 acres, 33 of which were forested. There was plenty of green space and birch trees to get lost among, so we followed our directions to an absolute “T”.

The bell tents of the main camp were arranged in groups, each forming a village accommodating 24 children and two animators, separated from the next by a light maquis. Settled uphill from the eating shelter and campfire were the villages of Silver Street, Wychwood, Justice Hill, Hill Top and Grimeset, while Overbrook, Brackendene and Birchester were level to the south and west . I was in the aptly named Grimeset but pronounced, we were told, Grimset, which appeased us somewhat.

Our tent on the right in the village of Grimeset

According to my camp diary, we arrived on a Saturday at 11am and were shown to our tents. Then we were taken back down the hill, given a large canvas bag known as a palliasse (a word learned that day and never forgotten) and told to fill it with straw from a heap on the ground. That’s when the first strings of reality sounded!

We struggled to drag the palliasses up the hill; Grimeset being almost at the top. We lined up palliasses four to a tent then, horror of horrors, we found spiders going in and out of the straw. We were given floor mats and shown how to make our beds, folding the blankets in the prescribed way. The toilet block, laundry tent and showers were basic. The latter – which few of us had seen before – only sprayed cold water. So no cons mods. In the afternoon, we put away our kit ready for inspection; our two dishes on top – one for dinner; one for porridge or soup.

The bell was raised at 7:30 a.m. with breakfast an hour later, followed by village duties which included taking turns disinfection and cleaning of the village latrine seat, followed by daily inspections. Morning milk was taken in the village before an hour of educational activities, such as making leaf prints, rubbing bark, and using a map and compass. The rest periods before and after the 1pm “dinner” probably allowed us to calm down. Further educational activities followed, with tea in between. Dinner was at 6:30 p.m. and, after the roundup of the day’s activities, cocoa at 8:30 p.m. second bell at 9:30 p.m. It worked, except one night when an ominous-looking moon suddenly shone into our tent, scaring the four of us. Our cries were heard down the hill.

As the week progressed in glorious weather, we were given an assortment of tasks, including items to find and wildflowers and grass stalks to collect, which we pasted into our journals. camp. On Monday we walked to the shops in the village of Cuffley with our authorized pocket money of 5/- (25p). On Tuesday we played “rotten eggs” and cricket. For the latter, I sided with Mr Hitchin – my favorite teacher – and we won. In the evening, I was a meal server and I had to clear and scrub our table. On Wednesday we collected herbs and plants. On Thursday, each village learned a different song for the evening campfire. The welcome cup of hot chocolate and the singing of the flames was memorable. “I hated to leave, but we had to” was my last journal entry. 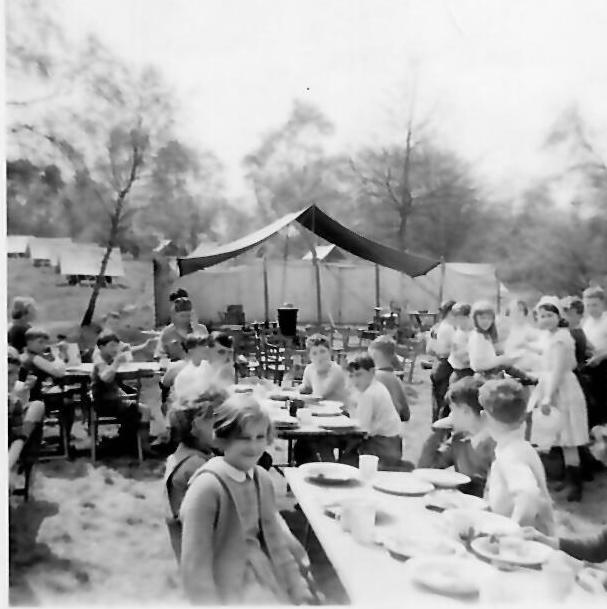 Meals at camp, Lesley ahead on the left

The invading spiders, cold showers and spooky new moon were soon forgotten and, in their place, the satisfying glow of an adventurous week of companionship and fun learning, which Enid Blyton would have approved. But the shock of the palliasses remained and I would never camp again. It was only through gentle persuasion three decades ago that my husband Bob encouraged me to go caravanning: a spider-free, straw-free option that allowed us and our family to travel the open roads of Europe with no fence in sight!

Lesley Dunlop is the daughter of the late Ted Parrish, a well-known local historian and documentary filmmaker. He wrote 96 nostalgic articles for the EPost-Echo party in 1982-83 which have since been published in Echoes of Old Watford, Bushey & Oxhey, available at www.pastdayspublishing.com and Bushey Museum. Lesley is currently working on ‘Two Lives, Two World Wars’, a companion volume exploring the life and war experiences of her father and grandfather, in which the story of Watford, Bushey and Oxhey will return to the stage.