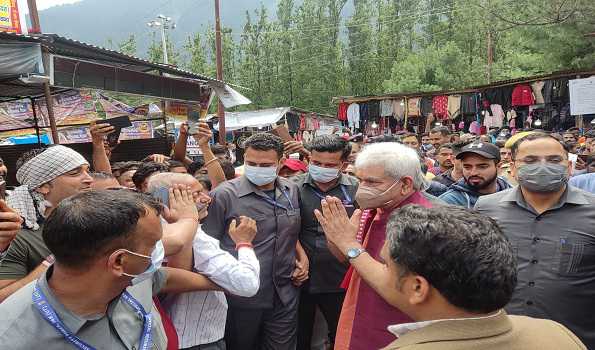 Amarnath yatra was suspended for the second day in a row today, following a huge downpour near the sacred Amarnath cave shrine on Friday, washing away many tents and lanagars, leaving at least 16 pilgrims dead and 35 other injured and several others are still missing.

Indian Army rescue operations have been going on for 48 hours. The jawans worked tirelessly to excavate the pile of rubble, always in the hope of saving precious lives of missing people.

NDRF DG Atul Karwal along with Commander of 17 Infantry Battalion JakRif Battalion and other officials visited the various points affected by the waterspout in Baltal in search of Nala by the Indian Army rescue teams between Sangam and Brarimarg.

“The Army, CAPF and NDRF did a commendable job during the rescue and relief operation. Efforts are underway to repair the road,” LG Sinha said in a tweet.

The Lieutenant Governor who visited Nunwan Pahalgam Base Camp today said, “We hope to resume the yatra as soon as possible, further efforts are underway to repair the road damaged by the waterspout.”

He also interacted with the yatris staying there and reviewed the arrangements made in the health facilities, the langars. “Providing better facilities for pilgrims is our top priority,” the Lieutenant Governor said.

Around 3,000 pilgrims waited at Baltal camp, awaiting official orders to proceed to the cave shrine for Darshan as the yatra remained temporarily suspended for the second consecutive day today from both sides.

More than 1.13 lakh pilgrims had darshan at the holy Amarnath cave shrine till Friday, officials said.