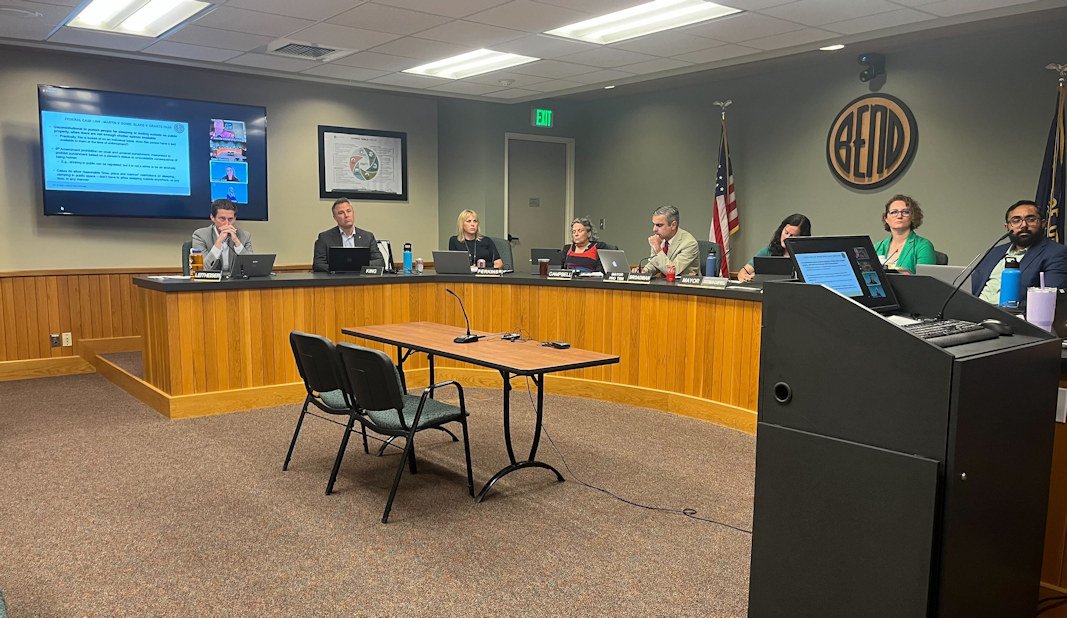 BEND, Ore. (KTVZ) — Rarely does a city council tackle a tough issue — such as the burning issue of homelessness — without court rulings, state laws and existing policies that come into play. Bend city councilors were briefed Wednesday night as they began researching how to regulate camping on city-owned properties.

Deputy City Attorney Elizabeth Oshel led the presentation (embedded below) on the status of court rulings, state law, and related issues as cities across the state and across the country are struggling with similar problems. She noted that the point count this year had 785 homeless people in Bend and about 280 shelter beds.

The ‘legal box’, as she put it, makes it clear that homeless people cannot be punished just for not having another place to sleep, and that the general rules are pretty much out the window – the Each person’s specific needs and situation must be taken into account, not just if a shelter bed is available.

Boise – the city in a much discussed 9e Federal Circuit Court ruling – passed a fairly sweeping ban on camping on public property. But as Bend Assistant City Attorney Ian Leitheiser noted, even in their code, it requires a police assessment of the individual before anyone can be cited. (The U.S. Supreme Court declined to hear an appeal of the ruling that limited what local governments can do to displace the homeless.)

Combined with a new state law that goes into effect next July 1 and attempts to codify the Martin v. Boise, the city can set “objectively reasonable” limits on when, where, and how — where, when, and how people can camp on city-owned land. But as advisers have noted, saying where people can’t camp begs the question – where box are they camping?

Oshel said: “At the end of the day, if we had a bylaw prohibiting camping in a certain area, the question would be, does that person have a legally available alternative for sleeping?”

Councilwoman Megan Perkins asked if any town in Oregon has been successful so far with a camping code, but Oshel clarified that as the state’s new law approaches, many are now adopting regulations specific to each city.

“I don’t think we have a model to pick and apply in Bend and I know we won’t be challenged,” she told advisers.

And City Manager Eric King echoed that: “We haven’t had a test case of what works and what doesn’t.” In fact, the state does not say that cities must enact camping regulations, only stating some general requirements if they do.

But if police were to inquire about someone’s background and whereabouts before deciding how to enforce these rules, it’s more like case management for new adviser Mo Mitchell, who is a therapist.

“Lots of training and education, basically case management – ​​lots of resources,” she said. “If we don’t have the resources to apply the code in a human way, that’s a sticking point. It looks like crisis response, mental health.

King noted that the city is helping Deschutes County fund a crisis response team that can play a role, so it could be a non-policing response except in certain security situations.

“We can write code, but it’s no good if we don’t work on the details,” like “the right people to apply it,” he said.

To avoid a long and cumbersome process, several councilors said they supported the city manager forming a working group to review options and parameters, then coming back this summer with a proposal or options. King said a similar presentation will be offered to the public, including a question-and-answer session.

“For me, the urgency is important,” said Mayor Gena Goodman-Campbell.

Those involved would hopefully include the business community, people who have experienced homelessness, and others like the Bend Central District, service providers, etc.

For now, Perkins said, “It’s going to be a really tough summer. What worries me is the constant movement of people in the city. She and others want the focus not just on where people can’t camp, but where they can. Amid a shortage of campsites for anyone, including visitors, where those who are invited to go can go is more problematic than ever.

Perkins hopes there could be limits such as the number of tents in an area, portable toilets for those who would otherwise defecate in front of businesses, etc. don’t. (Perkins made much the same points in the homelessness update she gives at every council meeting.)

Oshel also noted that the city is not an island or in a vacuum, that “how we regulate impacts areas outside the city limits.” Earlier, Councilman Anthony Broadman expressed strong disappointment that the Forest Service continues to move people out of camping areas south of Bend near China Hat Road with “nowhere to go”, saying it’s “not a human approach.

In fact, Perkins said all of those China Hat campers had recently received a notice from the Forest Service asking them to leave.

King said staff plan to get back to the board at its July 20 meeting with some details on the proposed task force and timeline.

Councilors also had to approve a long list of changes to its two-year budget.

It also includes nearly $2 million to add nine paramedic firefighters to keep pace with increased calls and open the new Pilot Butte fire station. The budget also includes $300,000 for a crisis response team that would not require a police presence. If approved, the position would be funded for two years by the county stabilization center. It would also require approval from the Deschutes County commissioners.

The city plans to spend $200,000 to create a shelter manager position to oversee the city’s three shelters and coordinate among responders.

NewsChannel 21’s Kelsey McGee attended the working session on the unauthorized camping code process. His report will be on NewsChannel 21 First at Ten on Fox.

Here is the presentation given on Wednesday evening:

For tonight’s homelessness update, I want to recap what Council learned during our business session: the creation of a municipal code to limit unauthorized camping in Bend.

Unauthorized camping is the type of camping we hear a lot about; unmanaged campsites are popping up along city streets and sidewalks.

We learned tonight that there are at least 785 people homeless in Bend and only about 280 shelter beds. This statistic becomes real for many of us when we see our homeless community members camping in public places all over the city. As we continue to increase the number of shelter beds available in Bend, we can begin to think about how we want to regulate camping in public places for the safety of those camping as well as others using public spaces.

Although we have 785 homeless people in Bend, it is also important to note that this is a regional crisis with regional implications. When we remove a camp from City rights-of-way, some of those campers may move to other public lands in the area. We will continue to see camping on city rights-of-way as other jurisdictions such as ODOT and the Forest Service also regulate and manage their own lands. For example, all campers in China Hat Road recently received departure notices, and these types of actions will inevitably move homeless people to new places to camp in the area.

We gave our opinion on the process and the type of public education and engagement process that we would like to see for this project. Staff will come back to us at a future meeting with recommendations for public engagement. Once we’ve given your feedback on a proposal, potentially later this summer, we can get to work developing a camping code that is compassionate and reflects our values.

If you want to listen to the working session that we have just finished, you can watch it on the Council Agenda Page.

As we begin to work on a camping code, we also need to think about how we keep our current shelters, secure parking lots, and other facilities that support homeless community members in Bend safe. We have heard from shelter operators and nearby businesses that they are starting to see homeless community members congregating around these areas when shelters are closed, and by people who are not engaged in the services provided by the shelter. This activity can negatively impact shelter site operations and may increase as other places where people have camped are closed. I would like to encourage my fellow councilors to consider how we might limit camping or gatherings around shelters so that we can provide shelter operators with the best opportunity to manage safe and efficient shelter sites, here we look at the permanent regulations on camping in the right of way. Hopefully that’s something we can get to later in our meeting.

It is not easy. We need to come together with our regional partners, our local businesses and our community to identify safe places for people to go. Our solution can’t just be telling people where they can’t go, but also where they can go. If we don’t continue to work on this piece of this puzzle, we won’t be able to have a lasting impact for our homeless people and our community as a whole won’t see any decrease in unauthorized camping. I urge our entire Central Oregon region to help find solutions and safety for the homeless, not just regulations and penalties.