Laurelhurst homeless camp will be cleaned up within the week 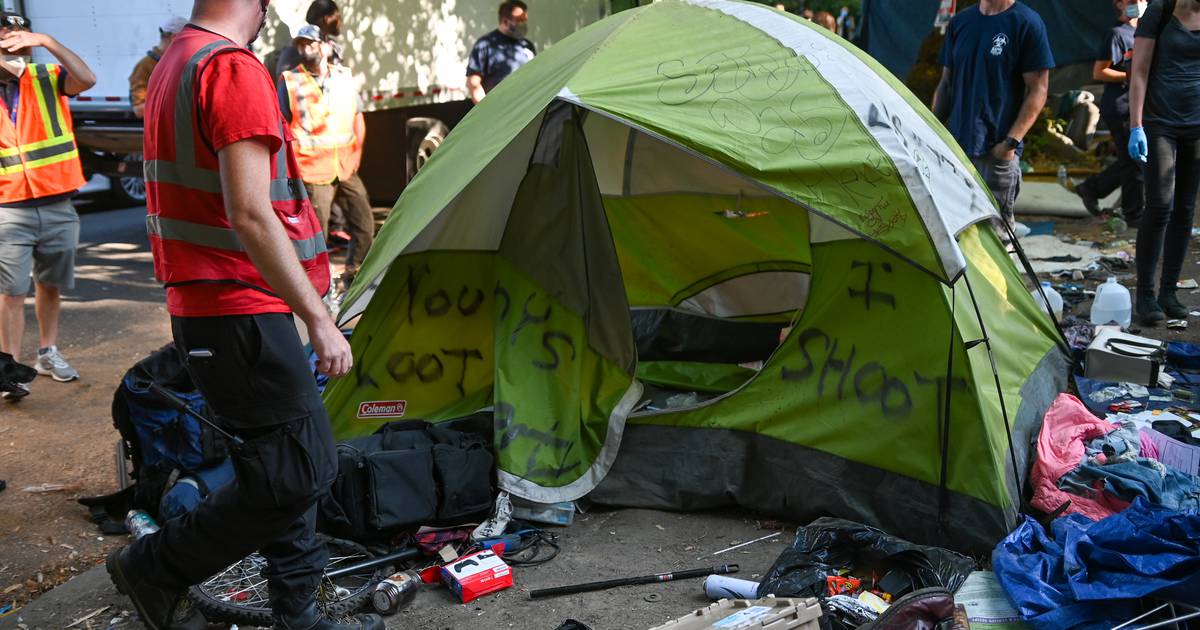 The camp along Southeast Oak Street in Laurelhurst Park will be swept over the next week.

The camp, which has slowly resurfaced since its high-profile removal by the city in late July, has become a focal point of ongoing tension between Portland homeowners and homeless people. It is also perhaps one of the most volatile situations, as the neighborhood surrounding the camp has become increasingly vocal and confrontational with campers since the last sweep this summer.

The camp was last swept July 31 after reports of campers possessing weapons prompted city officials to remove the camp. But cars and tents soon began to return to the street and the adjacent park annex. The camp has two distinct sections. One is along Southeast Oak Street, which is owned by the Portland Bureau of Transportation. The other is in the park annex, which is maintained by the city’s parks department.

On Oct. 5, the city posted a green flyer on a tree on Oak Street, telling campers that the camp would be emptied between 72 hours and 10 days from posting, just over two months after the last sweep. .

It came as a relief to members of the Laurelhurst Neighborhood Association, who WW reported on in August as their issues with the camp escalated to the point that a camper called police on two neighbors, alleging they took his belongings and filmed it. (Neighbors deny taking any belongings.) Several campers said WW at the time, they felt harassed by neighbors.

Emails between members of the neighborhood association and elected officials were shared with WW since the last scan. They show growing concern over the gradual growth of the camp. The dozens of emails follow almost every new car, motorhome or tent. They document the remains of fires, the accumulations of trash, and the individual actions of homeless people camping in Laurelhurst. The majority of these emails are written by TJ Browning, the association’s president of security.

On Oct. 16, Browning wrote to city officials, “Despite calls not to allow camping around parks and playgrounds, despite warnings of potential harm to our children and park users and park, there have been campers allowed in and around Laurelhurst Park for far too long. Now the worst [sic] has happened and a child has been victimized because of your inaction. So again I’m asking where is the promised mitigation to prevent camping on SE Oak St and SE 37th next to the Laurelhurst Park annex that was promised? How many more children will be hurt before you finally act? »

Browning was referring to an alleged incident where a young girl picked up a needle while playing in the park and was pricked by it. KGW wrote of the alleged incident, but could not independently verify that the incident occurred, as no 911 call or police report was filed.

After this alleged incident, other neighbors stepped in to castigate city officials for failing to clean up the camp.

On October 17, a neighbor wrote to the municipal authorities that he and her husband were leaving the neighborhood because of the camp.

“Commissioners Hardesty, Rubio and Ryan in particular, have done nothing to help residents deal with a long list of documented crimes, documented attacks by campers on park residents and visitors, and documented attacks on properties of the owners,” he wrote. and added that he and her husband had sold their house. “We all sent hundreds of emails, photos, and logged the issues through a useless PDXReporter for all of you. We didn’t receive an ounce of support and were ignored.

On October 21, another neighbor wrote to city officials, “Collectively, you have transformed a city that was known for its civic pride, progressive vision and environmental stewardship into another kind of role model, one of an unleashed progressivism, an abandonment of freedom. to be dismissed. You have made us a laughing stock and a warning to other cities here and abroad. Friends who used to envy me to live here are now calling me to ask if I’m okay.

The neighbors have encouraged each other to report any suspected criminal activity to the Portland Police Department so that the camp earns points in the point system that determines whether or not a camp is on the sweep list.

The city council held a hearing Nov. 5 on how best to allocate $40 million in excess dollars to public safety efforts. Their budget items included full funding for the expansion of Portland Street Response and doubling funding for the city team that conducts sweeps.

Browning wrote to neighbors about the expansion after the meeting: “People who make us uncomfortable will be dealt with by [Portland Street Response]. However, people who actually threaten our health and safety cannot be dealt with by the STS. »

She wants the city to hire more police: “Any attempt to delay or limit funding for more police hires is irresponsible and ignores the reality of how dangerous Portland is.”

The camp along Southeast Oak Street has not yet been removed. The city’s moving team does not tell the public when certain camps will be removed – only retroactively after they were removed – so it’s unclear how long campers have until they are forced to move .

The flyer promised that all items confiscated from the camp would be held by the city contractor who would perform the sweeps for 30 days before being dumped in the landfill.

In August, after the Laurelhurst camp was searched in July, attorney Micheal Fuller installed tracking devices on various personal items of displaced campers. A woman whose paint was tracked by Fuller, Marge Pettit, sued the city and its sweeping contractor, Rapid Response Bioclean, alleging she disposed of the paint without keeping it for the promised 30-day window.

On September 3, Rapid Response agreed to pay Pettit $500 for his painting to resolve the lawsuit (although the city and Rapid Response deny ever disposing of Pettitt’s painting): “Essentially, Rapid Response had to buy the painting of Ms. Pettit for $500,” Fuller says. “So they paid us $500.”