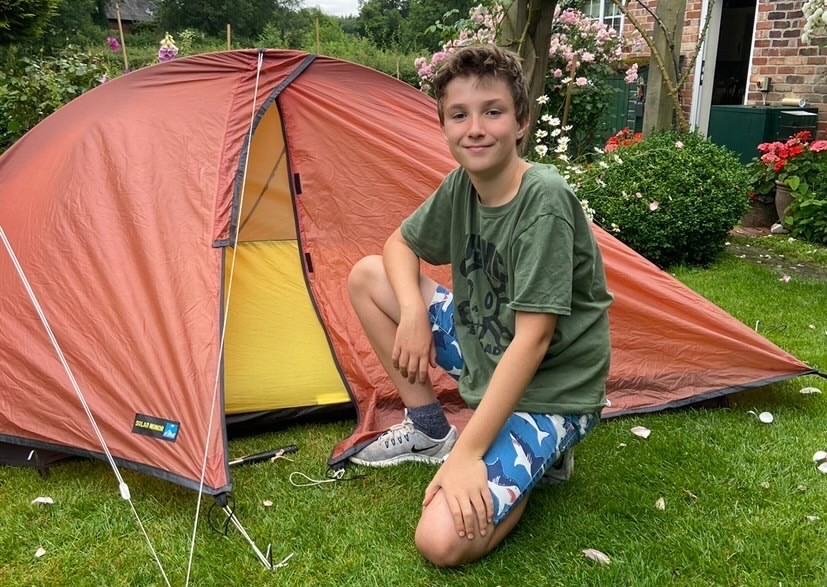 I live in Devon England where there are a lot of beaches so my family and I have always done a lot of surfing and sports. We had a neighbor called Rick who lived across the road and unfortunately his wife passed away in 2017. We wanted to make sure he was okay so we started to take care of him a bit and afterwards that, we became very good friends with him. He would come for dinner and my dad would paddle, bike and surf with him, they did so many things together. Rick was one of the fittest people I knew and was the only 70-year-old I met who had a climbing wall in his garage and did two-finger pull-ups.

Sadly, in 2018 Rick got cancer that started in his knees and spread. My dad is in the military, so he was in Plymouth at the time, but my mom and I would go to Rick’s to help him. All of Rick’s friends took care of him and I met some amazing people, they are so wonderful and great to chat with. The North Devon Hospice also took such good care of Rick and helped him die peacefully at home in February 2020. They worked around him and what he wanted.

One of the last times I saw Rick he gave me a tent and said he wanted me to have an adventure there. I promised him I would. I took the tent to Exmoor and camped with my dad. But I said I would have an adventure, and going to Exmoor is fun but not adventurous enough.

I decided to start camping in March 2020 when England was first stranded. At first my parents said no when I asked. They didn’t want me to camp outside because there was frost on the ground and it was really cold. I managed to persuade them and then asked if I could set up a fundraising page, just wanted to say as many thanks as possible to the North Devon Hospice for helping Rick. My mom really laughed, she said it was a great idea but she didn’t think anyone would sponsor me.

The first night I collected £ 100. I was so amazed that I could raise so much money in one night. I liked it so much. I did my first interview — it was a TV interview — and it terrified me so much. I think back to the interview and look so scared!

But donations skyrocketed after that and I have now spent over 500 straight nights camping out and raised over $ 750,000 (£ 550,000) for the North Devon Hospice. I have camped quite a bit with my family; we went to Exmoor and Dartmoor and we went wild camping. I also recently went to a sailing camp.

My tent has a sleeping bag, treadmill, pillows, torch, The Beano, a few rugby books and magazines, and plenty of soft toys. I think I have about eight teddy bears. I have a bean bag with the styrofoam balls out – it’s stuffed with lint instead.

I have camped in a lot of different weather conditions. There was thunder and lightning, thunderstorms, times it snowed and even a mini heatwave in the summer of 2020. But the only times I went inside was to complain and only in summer when it is too hot. I always go back to the tent. Now I only use my room for books and Lego, so my parents said they Airbnb my room as a joke. But I kind of want it to be on Airbnb. I could raise money for myself!

Earlier this year, a charity called Action For Children got in touch with us because they had heard about what I had done to raise money for the hospice. I thought it would be very nice to get involved with other charities and help them too. My family and I camped at the London Zoo with them in July, it was an unforgettable time! Then the association asked 10 Downing Street if we could camp there, so I pitched my tent at 10 Downing Street and had a one-on-one conversation with Prime Minister Boris Johnson. It was very fun. We talked about camping, Action For Children and the history of 10 Downing Street.

Camping is so much fun for me, I wanted to help other kids with it too. To celebrate camping for a year in March, I organized a “big camp” where kids from all over the world could camp outside that same night and raise funds. We reached out to Just Giving and they created this great page where kids could fundraise for the charity of their choice. It was awesome. In the end, everyone involved raised over $ 800,000 (£ 600,000) for their various charities. It was absolutely amazing that we could achieve this.

The North Devon Hospice love what I do and they have been very supportive of me. They gave me a lot of candy to slip into the tent. It’s absolutely amazing to be able to raise so much money. I never thought I would make around $ 135 (£ 100). My parents even thought they should add to the donations to rock the money to $ 135 (£ 100). They also told me they would double what I collected, I’m still waiting for them to do it!

I have had friends who camp with me, but my dad’s excuse is that part of his job in the military is camping outside and he camps in wars. He says he has his bed at home! My parents supported me 100 percent. They were there when the tent collapsed and spent a lot of time doing it. Half of my friends think I’m crazy, and you know what, I don’t disagree with them to be honest. The other half think it’s pretty cool and exciting. I will definitely continue camping, I would like to get on a plane and camp somewhere in a forest. I would really like to go to Australia.

I think other kids should definitely go if they want to have an adventure like mine. It will be difficult to get started, but it will definitely be worth it. If Rick was still alive, I think he would be in the tent right next to me, camping with me.

Max Woosey lives in Devon, England. You can follow him on Instagram @the_boy_in_the_tent and check out his fundraising page here.

All opinions expressed in this article are those of the author.

As said to Jenny Haward.