Howard University students camp out in tents to protest mold, rats and flooding in dorms 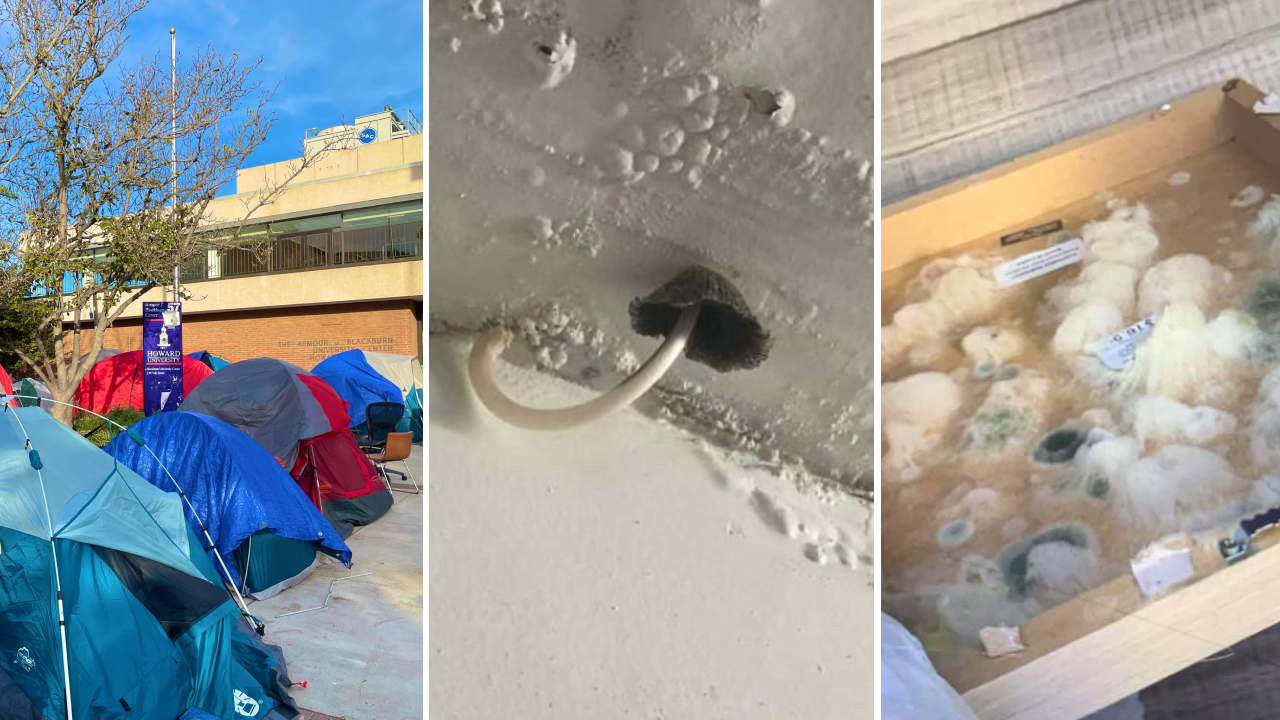 Mold in the air vents, rats in the hallways, fungus growing on the walls… These are the conditions that students at Howard University in Washington, DC are begging their administrators to correct. For nearly a month, they have been occupying a student center on campus and sleeping outside in tents to protest poor housing conditions and security issues at the university.

Up to 150 undergraduates have been sleeping at Blackburn University Center, a student center and cafeteria in the heart of this historically black college, since October 12. They mobilized on social media, such as Instagram, Twitter and TikTok, using the hashtag #BlackburnTakeover to deplore the conditions in university residences.

Students cite issues such as mice, insects, and mold, as well as problems with heating and WiFi access.

see all those little black dots on the ceiling? they are fleas. these photos were taken this morning in the communal showers of Drew Hall at Howard University. #BlackBurnTakeover pic.twitter.com/rwaOPGPMSp

Photos posted to Twitter on Nov. 2 show bugs on the ceiling of a Howard University dorm.

At least one student was hospitalized with mold exposure after moving into a Howard dorm, and several others said they were sick for weeks before discovering mold in their rooms. The university found that 41 rooms on campus, or less than 1%, were affected.

Is this the mold situation at Howard’s? ! It’s absolutely ridiculous. It should never have gotten this bad pic.twitter.com/D1y7oFIurj

Photos posted to Twitter on October 27, 2021 show mold collecting on objects in a Howard dorm.

Meanwhile, on-campus housing costs students up to $12,000 (over €10,000) per year. The university also receives federal funding and donations, including $40 million in 2020 from philanthropist MacKenzie Scott, ex-wife of Amazon’s Jeff Bezos.

Although seven of the eight residence halls on campus have recently been rebuilt or renovated, students complain of ongoing maintenance issues. They started a petition calling on the university to end its 40-year contract with Corvias, the private company that runs its dormitories.

Student demands also include reimbursement of their housing costs, relocation to safe and free accommodation, and payment for health care related to housing conditions. Sit-in organizers posted updates and calls to action via an Instagram page called The Live Movement.

On Oct. 26, the university released a statement saying it had placed residence halls under “hyper care,” dedicating staff to carry out regular wellness checks, deep cleanings, trainings and check-ins with students who have “reported signs of mold, mildew or any fungal growth in their rooms”. But students say the dorms are still unlivable and the school’s solutions are incomplete.

In addition to complaints about on-campus housing, students say those who live off-campus struggle to find affordable housing in the DC area, where a studio apartment costs an average of $1,843 (€1,590) per month .

These concerns about student housing come on top of other issues with Howard University’s administration, which students say make it difficult to resolve issues and access campus resources. In addition to better living conditions, the protesting students demanded a meeting with the president of the university as well as student representation on the board of directors.

Students participating in the sit-in have also received threats of punishment – ​​even expulsion – from university officials. They say they will not end their protest until the university president agrees to a public forum open to all students.

Living conditions issues at Howard University are not new. In 1989, a group of Howard students occupied an administration building, demanding better housing conditions and campus security. Students staged similar protests between 2016 and 2018, but they say little was done to address the concerns.