How This University of Texas Helps Farmworker Kids in College 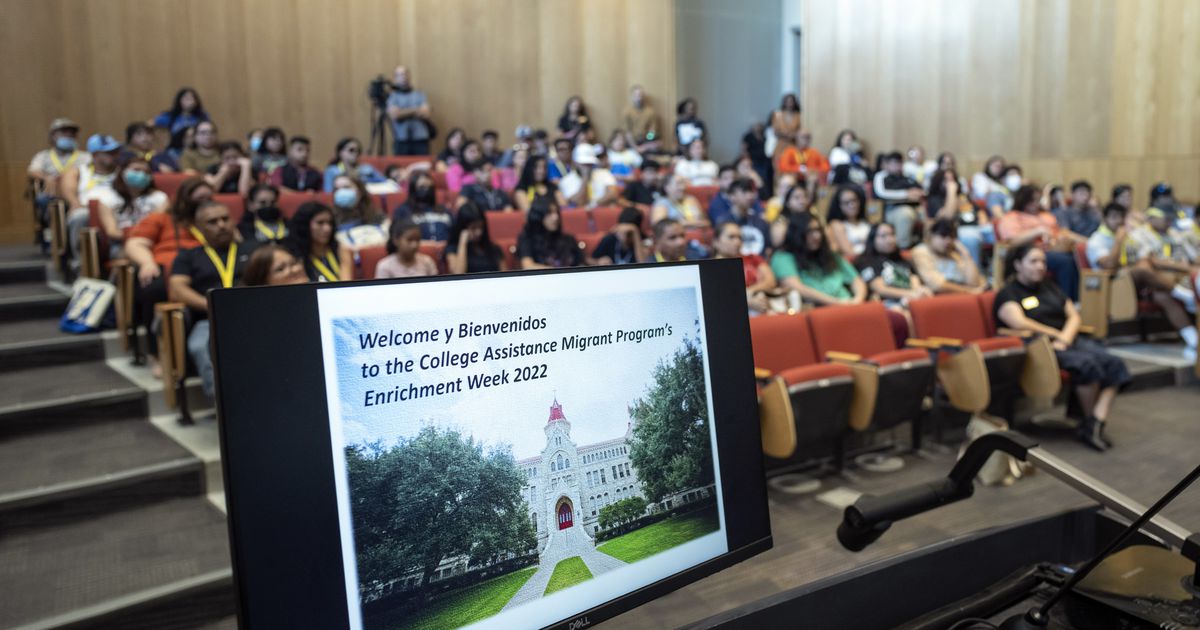 When Sonia Briseño was a student, she got up early to study knowing that her family was going to work in the fields.

She had spent much of her teenage years working 12-hour shifts harvesting asparagus and cucumbers alongside them. It was therefore difficult to adjust to life at St. Edward’s University, as she was the first in her family to leave home to pursue an education, which resulted in a mixture of fear and excitement.

“There was this guilt of leaving my family and knowing that now I was a student in Austin, and I was unable to work and provide and also help with the family income,” Briseño said.

But an initiative to help the children of migrant farm workers stay on track brought her into contact with upper-class students and alumni who managed to nurture a sense of belonging for her. Briseño now oversees the program, which celebrates its 50th anniversary.

St. Edward’s was one of four schools nationwide to pioneer the College Assistance Migrant Program, known as CAMP. It is a federal program developed as a result of President Lyndon B. Johnson’s Higher Education Act of 1965 which was intended to help students living in poverty.

More than 2,890 students — mostly from low-income Hispanic families who do seasonal agricultural work — have attended St. Edward’s program over the past five decades.

CAMP officials help qualified students apply to college, as the admissions process can often trip up first-generation students, sometimes even derailing their entire college journey. Then, they provide extensive support during their first year so that students persevere and eventually graduate. These efforts include tutoring, mentoring, and seminars that help them navigate the financial aid process, campus life, and even impostor syndrome, which is doubt about one’s abilities or talents that can lead to feeling like a fraud.

This support, along with knowing that tuition is covered for up to five years, has helped Justin Treviño feel empowered to pursue his passion and earn a degree. He is one of 34 students attending CAMP at St. Edward’s this year.

18-year-old Treviño is happiest when he explores digital worlds where he can freely embark on different adventures in unknown lands and choose his own path. So, one of his high school counselors at Eagle Pass suggested he apply to St. Edward’s since the school has a video game development program as well as CAMP.

Applying to college and filling out complicated financial aid forms was a challenge because he couldn’t count on his parents’ help.

Treviño’s mother grew up in Piedras Negras, a town in Mexico that borders Eagle Pass. She grew up struggling financially, with constant food and housing insecurity, so she moved to the United States to seek work in 1999.

The aspirations of his parents motivated him throughout the process.

“For them, my future is the most important thing,” Treviño said. He added: “This college is a chance, an opportunity.”

At CAMP St. Edward, first-year retention rates have been around 91% in recent years, and the six-year graduation rate for those who started first-year in 2015 reached 60%, according to academic data.

In 2018, Texas and nationwide freshman retention rates were around 80%, according to the most recent data from the National Center for Education Statistics. According to national data, six-year graduation rates for those who started freshmen in 2014 were just under 60% for Texas and about 64% nationally.

The other early school in Texas to implement CAMP was Pan American University, now known as the University of Texas Rio Grande Valley.

Today, Texas has seven such programs, which are among 55 nationwide.

Children of migrant farm workers can often feel alienated from their peers because of their unique experiences, Briseño said. This can lead to withdrawal from classes, damage to their mental health or social isolation, she said.

It is therefore essential to nurture a sense of belonging – especially in their first year – for students, because university is “something brand new”, she said, and that is what what CAMP does.

The programs have mostly flourished despite funding challenges.

Although the grants have continued over the years, at least two former presidents have proposed reducing or eliminating its already unpredictable federal support for the programs.

The U.S. Department of Education funds about 7% of St. Edward’s $5.9 million annual budget for the program. The Catholic university does the rest thanks to private donors.

Like many students from poverty backgrounds, they faced food and housing insecurity, unstable internet access, and family pressure to work and take on other responsibilities. They also did not have access to the technology that was available on campus.

More than 130 CAMP students have received nearly $225,000 in federal COVID emergency funding from 2020-2021 as well as a college gift fund and a Kuhn Foundation grant.

Only eight students did not return because they needed to work or take care of family members.

Mayra Levario, 26, said the program has helped her overcome limitations by offering support in her academic and personal life.

Many of his relatives came from Mexico to work in the fields of grapes, garlic, cantaloupe and chili peppers in the United States, including his father – who only went to school until the end of his life. sixth year.

Despite Levario’s own doubts about entering the private university, she graduated from the program in 2018. The constant outpouring of support from her leaders kept her going, she said.

Levario is currently a medical student at Texas Tech University. She wants to work in underserved communities, like the one she grew up in after graduating.

“They completely redesigned what my future would look like,” Levario said. “CAMP reached out and said, ‘We’ll help you and we’ll find a solution together. “”

Did you know that what you just read was a solutions journalism story? He didn’t just look at a problem; he considered an answer. By presenting evidence of who is making progress, we remove any excuse that a problem is unsolvable. This story is supported by a grant from the Solutions Journalism Network. If you like solution-based reporting, consider supporting our public service journalism by donating to our education lab.

The DMN Education Lab deepens coverage and conversation about pressing education issues critical to the future of North Texas.