Homeless camp to be cleared for planned mixed-use development 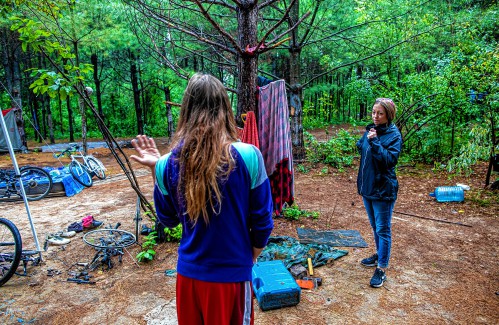 The woman who calls herself Zelda wears pink eyeshadow and doesn’t want to live in the tent in the woods along the Merrimack River. If successful, the New Hampshire native would be in a home in a sunnier location, like Savannah, Georgia or possibly Beverly Hills.

Later this month, she will abandon her temporary home not to move to a warmer climate, but because the owner of the land south of Black Hill Road in Concord near Interstate 93 exit 13 wants to develop the wooded area where she and a dozen or so other homeless people live.

She is already on several waiting lists for housing but nothing has materialized.

“Just because you have all your ducks in a row doesn’t mean you don’t have to wait,” Zelda said. “Very patiently.”

In the meantime, she plans to pack up her tent and move to another encampment in town, joining the slow exodus of homeless Concord residents leaving the site of the former drive-in theater before October.

The 22 acres on a triangle of land sandwiched between Manchester Street and the motorway are owned by a family trust, which is in the early stages of seeking city approval for plans to turn the area into a huge mixed-use development with as many as 266 housing units in five buildings, as well as a gas station, car wash, sandwich shop and convenience store.

Later plans could include a supermarket, a medical office building, a restaurant, an assisted living facility and independent townhouses.

Landowners’ lawyer Ari Pollack said he would ask contractors to start clearing the area in late September or early October to make it more attractive to potential development partners.

“It’s a difficult and delicate situation and we’re trying to manage it as best we can,” Pollack said. The landowners have asked Concord police to coordinate the removal of the encampment, but have not yet asked police to make arrests if people refuse to move.

Deputy Chief Steven Smagula said while Concord Police had the resources to carry out a sweep – effectively evicting everyone within hours – a slower approach gives residents more time to move their belongings and allows for a bit more of dignity.

“We decided that the best course of action was basically to spread soft messaging first, through outreach,” Smagula said. This means that Julie Green, clinical director of case management at the Concord Coalition to End Homelessness, reminds people she sees every week that they have to move by the end of September.

“At the end of the day, the million dollar question is ‘where am I going? “, and we never have a good answer to that,” Green said. She and other Coalition staff can help call shelters, refer people to addiction treatment or file housing applications, but the waiting lists are long.

“Some of our people there have already applied for emergency housing through New Hampshire Housing, some of our people have applied for Concord housing vouchers,” Green said. “Most people, due to the delay, will have to move to another location in Concord, as applying for vouchers is a cumbersome process.”

When she started telling people the landowners wanted them to leave, Green said there were 30 to 45 people staying there. Those numbers have dropped to near 15 or 20. Some have managed to find more permanent housing, including a veteran who Green says was homeless in Concord for 12 years and now has a place to live in Nashville, Tennessee.

Later this month, the police will give a more formal notice to anyone still present, accompanied by outreach workers.

“Officers will advise who they’ve spoken to that the owner wants them out, and then…we’ll be back in 10 days, with the goal that they’ve moved on, that we don’t have to charge them. people,” says Smagula.

Police and solicitors used a similar outreach strategy to dismantle an encampment between the freeway and Storrs Street this spring, carrying out a planning process that took eight months.

Some of those displaced from Storrs have moved to the current Black Hill Road settlement, Green said. She expects many of those leaving now to remain homeless, moving their tents or cars to unused land elsewhere in Concord to start over.

Most of the people living in this overgrown terrain have been homeless for a long time.

The US Department of Housing and Urban Development defines a person as “chronically homeless” if that person has a disability and has lived in an area unsuitable for human habitation or in an emergency shelter for more than one year. While the Concord Coalition to End Homelessness prefers the broader term “long-term homelessness”, the organization primarily focuses on people who have been homeless for years, rather than families or those who lose briefly. their accommodation.

“The focus is on the long-term homeless, as they use the most resources,” said Gregory Lessard, director of housing initiatives for the Coalition. Without a plan to help people who may have interrelated issues like addictions, criminal histories, or serious mental health issues find housing, communities end up relying on expensive emergency services like hospitals and police and fire.

While palliatives like the emergency winter shelter act like necessary band-aids, coalition executive director Ellen Groh says real solutions require finding ways to permanently house people in one place. where they can access services. About two years ago, his organization realized that housing for its clients simply did not exist and that the coalition needed to take a more active role in building these houses.

“The problem is really the lack of housing,” said Lessard. “It’s very difficult for everyone to have accommodation, and for our customers it’s particularly difficult.

The Coalition has a multi-year plan with different housing solutions for people living in long-term homelessness and aims to permanently house approximately 130 people over the next six years. Some of these strategies include providing 24-hour supportive housing services, convincing landlords to rent to their clients, working with developers to reserve units in future projects, and purchasing land for housing. people in mobile home parks.

Groh and Lessard say the Coalition plans to present the various tracks they are working on in late October.

Meanwhile, if Concord residents want to help their homeless neighbors, Groh said they can volunteer with the Coalition or sign up for legislative updates from Housing Action in New Hampshire or national groups. such as the National Alliance to End Homelessness.

Zelda knows that people lucky enough to live in houses make assumptions about people like her – that anyone living homeless is a drug user or a bad person. But some people develop addictions after becoming homeless, she said. Others are unlucky or have no support to bounce back from a mistake.

“Just because you’re homeless doesn’t make you a bad person. Some people are very, very smart and made bad choices,” Zelda said. “My mother made a bad choice. She had an alcoholic boyfriend and he fired me.

She’s one of the few women in camp near the Merrimack, and she tries to keep the men who remind her of the Lost Boys of Neverland in line. It can be a stressful place to live, but there is also friendship and solidarity between people brought together by their lack of a safety net.

“It’s not just about being homeless and doing drugs. That’s not it at all,” Zelda said. “It’s about being a community and supporting each other.”