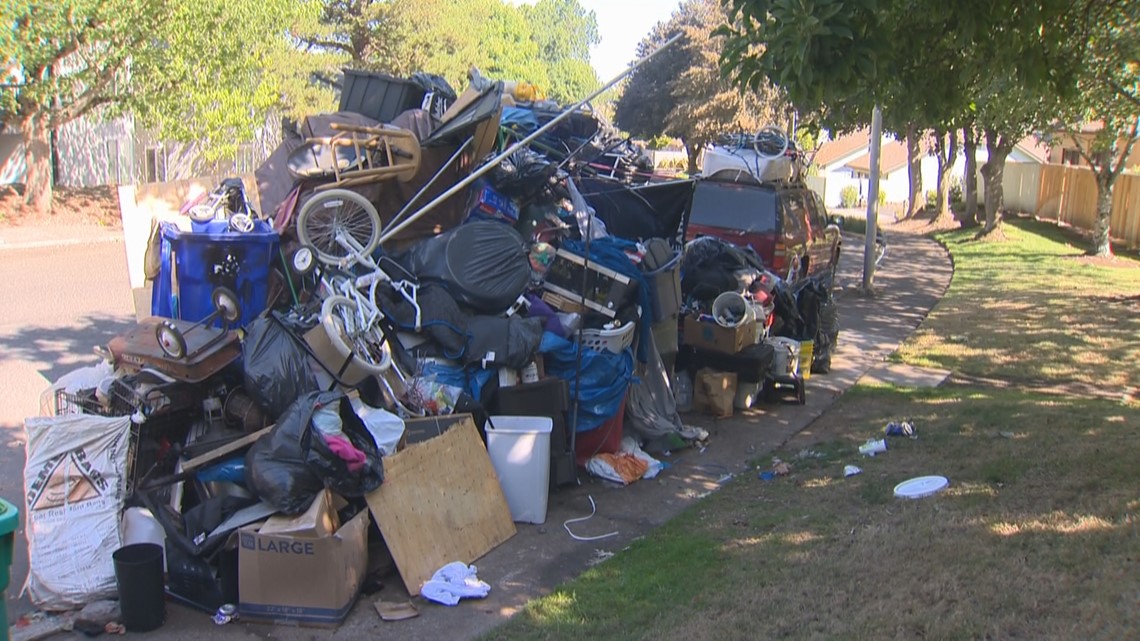 Residents living near the camp at NE 125th Place and Shaver Street said the homeless people living there had refused help from the city.

PORTLAND, Ore. — For the past two years, families living near the corner of Northeast 125th Place and Shaver Street have had to share their lawns with a homeless encampment.

Residents told KGW that homeless people in their quiet neighborhood, nestled between three schools and rows of cornfields, have refused city services.

“They just spread their shit. It’s a different pile of junk every year, every day,” neighbor James Eveland said of the camp.

He said the camp moved in almost two years ago and never left.

“It’s frustrating,” added Lisa Dashiell. “I would like a better life for them. I recognize that it is their choice but also as a citizen housed in the neighborhood, I also have concerns for my neighbors.

RELATED: ‘Work With Me’: Mayor Ted Wheeler Begs Portlanders Not To Give Up On The City

Reporting the camp to the city has been a weekly chore for Dashiell.

“Oh my word, I would average once or twice a week for two years,” she said.

Neighbors said the camp brought violence, drugs and rodents to the neighborhood.

“Vehicles are multiplying. It all started with a storage vehicle which was a van. Then there was another car that was moved and filled with storage. Then there was a car coming and going. Now there’s a utility trailer,” Dashiell said.

“They cover the sidewalk and people can’t get through,” Eveland added.

KGW tried to speak with those living at the camp, but no one was there Thursday morning. Neighbors said the city came out to offer them resources, but they turned them down.

Last week, the city received 3,389 new reports of campsites similar to this neighborhood. They documented 372 sites, cleared the trash from one of them and removed 54. During this process, they spoke to 708 homeless people and offered shelter to 30. Twenty-five of them they accepted.

“There has to be a step more than that,” Dashiell said. “As long as you choose not to move, then those are your other choices – and it’s not here on the street.”

“We have worked all our lives for the little I have. I broke my pussy for over 50 years, I don’t get money from anyone. These people just don’t care,” Eveland said.