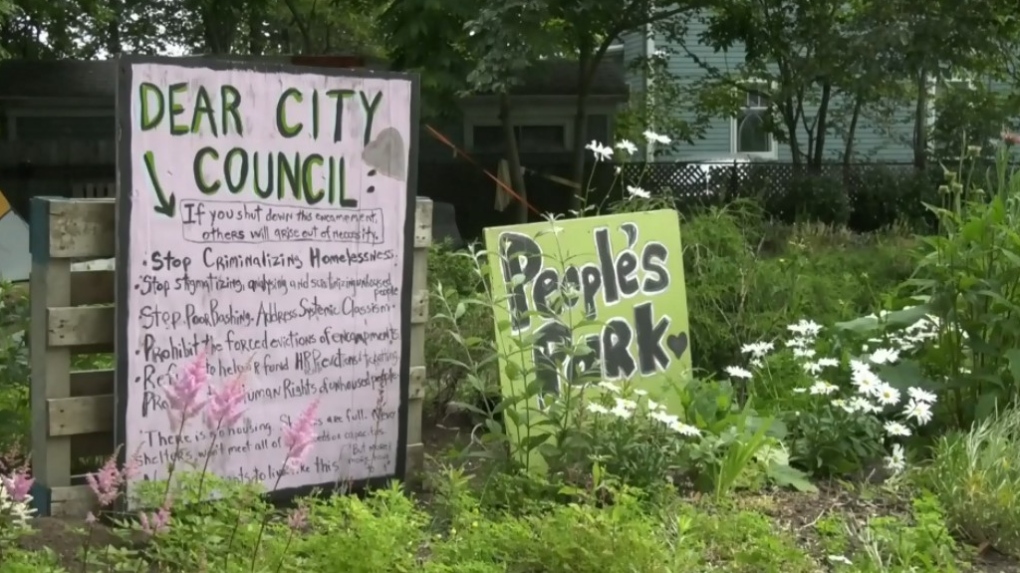 People living in a central Halifax park are staying put for the time being, despite a departure notice issued by the city.

Earlier this month, the Halifax Regional Municipality (HRM) issued a notice to homeless residents to leave Meagher Park on the corner of Chebucto Road and Dublin Street by July 17, but on Monday afternoon there was two more shelters and two tents on site.

“As long as they want to stay, we’ll be there to support them,” said Victoria Levack, a volunteer who watches the park in case police or city workers show up.

A person who lived in the park told CTV News that he and his wife accepted an offer to go to the hotel last week, but called the option temporary and therefore did not plan to leave the park.

“They prefer to stay here where they’re stable and have support,” Levack said.

But some neighbors want the park back to what it was. Once it’s empty, the city plans to clear the area and reseed the grass.

“We just want a peaceful resolution, and if they’re given that date, I think they should stick to it,” said Mary Fotis, who lives next door.

Fotis said she felt bad for the people who lived in the park and wanted governments to find solutions.

She is also concerned about another problem that she says the neighbors have been dealing with for about two or three months: rats.

“They are everywhere. They are on our property,” she said. “They are next door. We have an exterminator.

Traps have been set and Levack thinks the rats are no longer a problem after neighbors and the city get involved.

“It’s no longer a problem because the city stepped in after weeks of asking for help and providing pest control,” Levack said.

Since the announcement of the park’s closure, the MRH said it has made more funds available to street navigators to help people living in Meagher Park relocate to one of four designated parks where tents are permitted – Barrington Street Green Space, Lower Flinn Park, Green Road Park or Geary Street Green Space. All sites have garbage collection, portable toilets and plans are underway to deliver bottled water.

HRM also notes that its modular units in Dartmouth are nearly full, but only about 50% full in Halifax.

If someone refuses to leave Meagher Park, the municipality has said it will try to negotiate a plan, but if that is not possible the police will be called as a last resort.

“I don’t want anybody getting a ticket,” said HRM deputy mayor Pam Lovelace. “I think that’s a completely heavy-handed and wrong approach. The Chief Executive and Chief of Police Dan Kinsella have both pledged not to issue tickets.