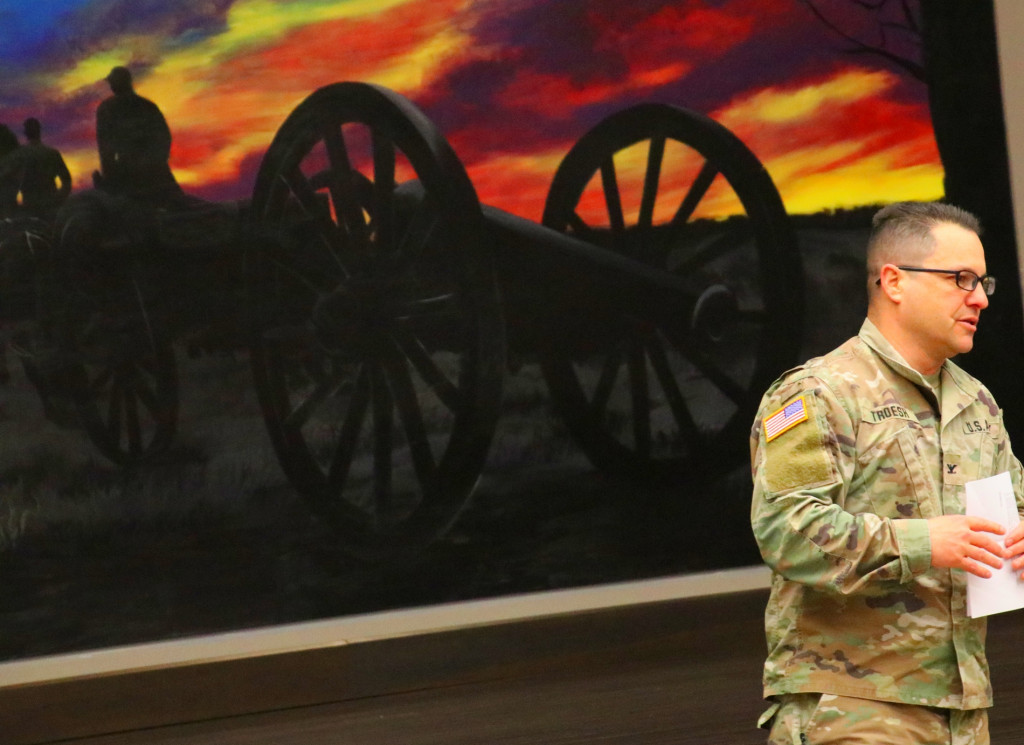 GUERNSEY CAMP – A gathering of all interested community members who were invited to the Guernsey camp last Thursday for what the camp called a town hall meeting and question and answer session proved positive interaction between camp soldiers and community members.

This was a time set aside to update the community on upcoming plans and activities taking place at the camp and also to hear questions and comments from members of the Platte County community.

The meeting was opened and visitors were welcomed by Adjutant General Major General Gregory Porter and the meeting was turned over to Colonel Chris Troesh who has been the Camp Commandant for the past few years and who moderated the meeting.

“One of the big issues we want to talk about is that fire season is coming up,” Troesh said. “While not as bad as last year as we are sitting at 90% humidity compared to last year we were at 52. Due to lessons learned last summer we have learned a few lessons and improved our firebreak network, we’ve been doing a lot more controlled burns over the past season. We’ve got several tabletop drills for safety training.”

Troesh then proceeded to explain the next project that would benefit the city, which is the repair of Lucinda Rawlins Road and the walking path that was washed away.

“We figured out how to fix this problem,” Troesh said. “Our pivot right now is to get a very accurate map and the only map we’ve seen is hand drawn and probably not very accurate. Our facility manager is working on getting an accurate map of this area. Once this completed card, we can figure out how we can actually pay for it.

If they determine that the trail to be repaired is on post property, they will withdraw the money from the correct camp account. If it’s on public property, the custodian could do the job, but the money would have to come from another source.

The next issue Troesh brought up was the minor issues Cowboy Challenge was having with some of their caddies leaving their grounds unguarded. Rumors swirled that the cadets were breaking into cars and destroying property, but the truth, according to Troesh, is that this did not happen.

“Most of these children have been returned to their families and are no longer stationed here,” Troesh said.

Another piece of news that appeared in the newspapers in early March was the arrival of the camp’s new commandant, Colonel Toby Alkire, who started working weekends last weekend and will alternate weekends with Troesh.

Other things that were showcased were the camp warehouse which was being rebuilt and there are plans to build another barracks in 2023. As for the new warehouse, it will be showcased at the camp open day on the 6th august.

There is also construction work at the ammo supply point.

A question was asked by the community about excessive dust during training and detonation. Troesh said a study was done and determined that water tankers would be used to saturate the ground before training.

Troesh also commented on the start of the establishment of the camp and revealed his 20-30 year plan which aims to modernize the Guernsey camp. Some of the things that will be done, according to Troesh, are the construction of a new barracks, a new fire station and an operations building which are within the plans.

With the Guernsey camp being a training centre, Troesh said there would be between 300 and 600 more people until mid-August.

Finally, Troesh said there are many jobs available at the Guernsey camp and if anyone is looking for a job at the camp contact their office. There’s a fire chief position opening up soon, firefighter positions, and even Cowboy Challenge is hiring.

General Porter then addressed the question of how the economy has affected the Guernsey camp.

“We were pretty concerned about the budgets we were going to do,” Porter said. “Ukraine might change their mind about the destination. We find out that the upper budget is about the same. What’s kicking our ass right now is inflation and the cost of materials. A big part of what we came up with five years ago is no longer valid. And we’re not really getting any love from anybody to give us more money to fit into that. In two cases, we have to reduce the size of some of our construction projects.I think inflation is going to be with us for a while.

The number to call with any questions, comments or concerns is (307) 331-8190. It’s the
Assistant base operations director’s on-call phone.