Glamping or camping is the question – Palatinate 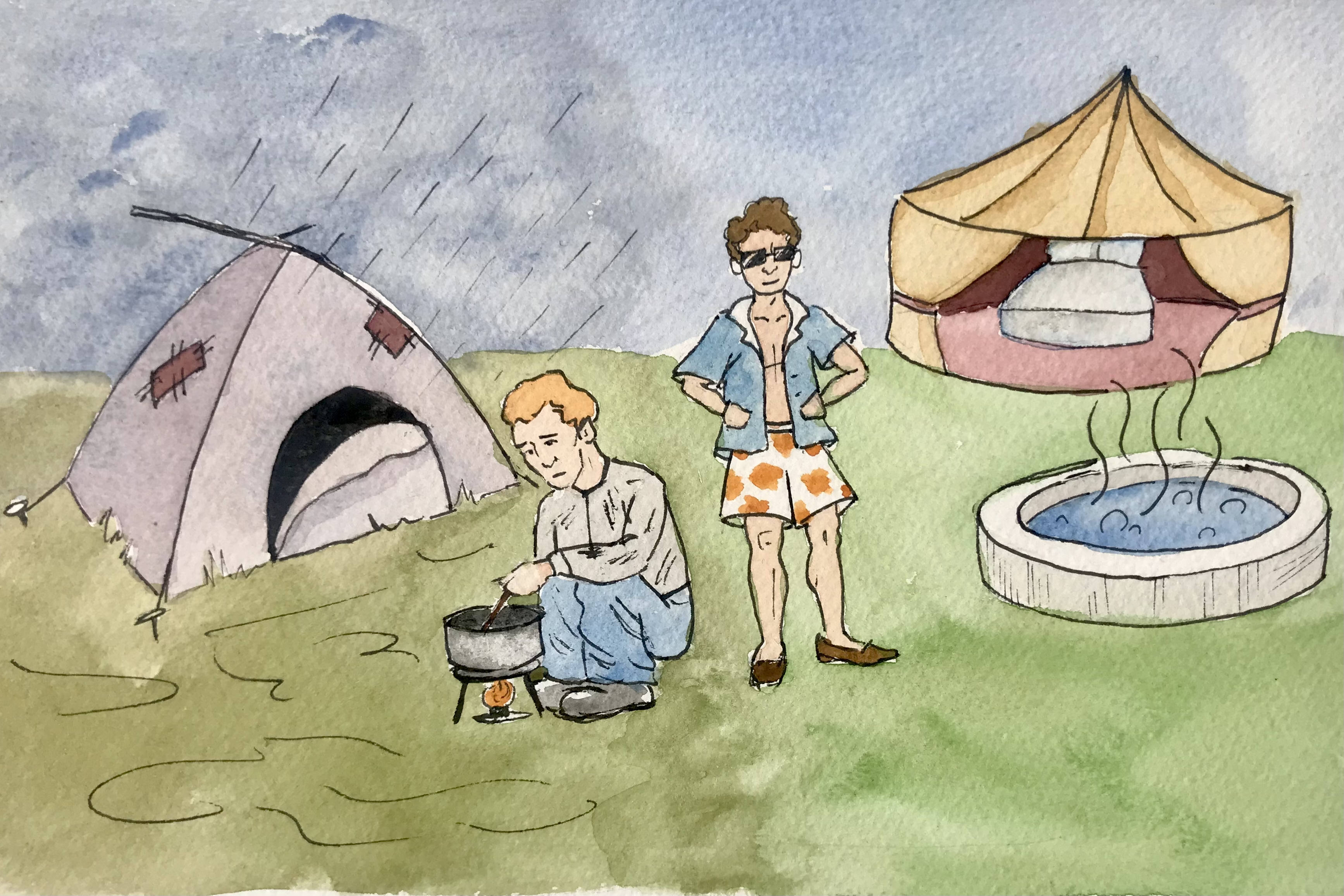 The British population, I have noticed, is neatly divided into two categories: those who yearn to spend their summers camping in overgrown fields and those who wince at the very thought. Undeniably, I fall for the latter. The idea of ​​having to walk two kilometers to the bathroom and waking up suffocating in an unbreathable polyester cocoon, with only a flimsy sheet as protection against whatever is underneath, is far from appealing.

Don’t get me wrong, I’m sure the freedom that comes with camping is rewarding. Of not being physically confined to one place, the dizzying sensation of crawling into a tent after hours of endless talking with friends, and waking up to the sound of birdsong, or in a festival setting, people moaning because of their hangovers. Not to mention the mystery of not knowing where you’ll end up in the evening, of not knowing what’s beyond your tent — a feeling of uncertainty that feels rather liberating.

However, this uncertainty is not one that I find stimulating. Yes, going camping for a festival seems the only natural choice, and somewhat socially acceptable. That’s what festivals are known for: the camping experience. The experience that will mature you and force you to prepare for the tough world that awaits you outside, and in my case, deter you from camping for life.

I get chills just thinking about my experience camping at a festival – waking up with condensation dripping down my forehead, waking up groggy in heavy hot air and immediately becoming agitated by the number layers that I thought would insulate me rather than make me sweat profusely. Having to exit the tent out of breath to be greeted by another thousand confused faces emerging from the tents at 6am. Having to walk miles just to take a shower, only to be besieged by sweaty bodies and covered in dust hours later. Having to brush your teeth with a bottle of warm water while trying not to make eye contact with your campsite neighbors whose entire conversation you could hear at 4am. Yes, memories were made, but some that I will never forget and not for the right reason.

I always remember ogling those who chose to glamp – it was obvious they were glampers. Their hair shone, their skin shone, and their fresh smell contrasted sharply with the intoxicating smell of sweat and beer from the morning rave that infested the campsites. I wanted to wake up in an airy tent, be able to curl my hair and take a shower without fear of catching a disease that lurks in the middle of the waters. I wanted to smell like coconut, not have to rely on wet wipes for my hygiene, and be able to go back to bed without worrying about something being stolen.

I know people will say it’s just the festival experience, that there’s no luxury in a festival because they have to be enjoyed covered in mud and dust and sweat, but I don’t see really not the fun in there. Some people are just campers at heart – they live and breathe camping, while those like me prioritize their sleep, and their sanity for that matter, to prepare them for a day filled with dancing, singing and drinking. I still remember escaping the muddy confinements of the festival grounds with my friend, we both looked at each other and burst out laughing saying “Never again”.

Perhaps my attitude towards camping stems from a rather traumatic holiday in the south of France as a child. With my father experimenting with family camping, we settled on the Dordogne River, a bustling river maneuvering around quaint French towns and small pebble beaches – one of many beautiful places in Europe. Inviting herds of canoeists, anglers, avid swimmers and a group I never thought I’d fall for – campers. Regardless of the scenic location, it’s safe to say that we didn’t handle the camping part very well. The first night my mum discovered that the toilets and showers were fifteen paces from the site, there were no built-in beds and, shockingly, there were no hair dryers. The next night my dad saw a rat running across the floor of the tent as we tried to sleep on our flimsy beds. Every night we were woken up by the Scottish family in the tent next to us screaming for their daughter to sleep.

In a desperation to save the holidays, my dad tried to upgrade to the forest cabins, but others smartly beat us to the race, and they were full. As a child, I never realized how tragic holidays were when my only requirements were an endless supply of pain au chocolat and a place to float mindlessly on my inflatable flamingo.

But I can say with confidence that I know now. It’s really unbearable. Maybe I’m being overdramatic, but I really find it hard to understand why people like being squashed in a rough sleeping bag with only a thin layer protecting them from the mud. Maybe I should try again and invest in a quality tent that doesn’t choke me in my sleep, but I think for now I’ll stick with the glamping option.