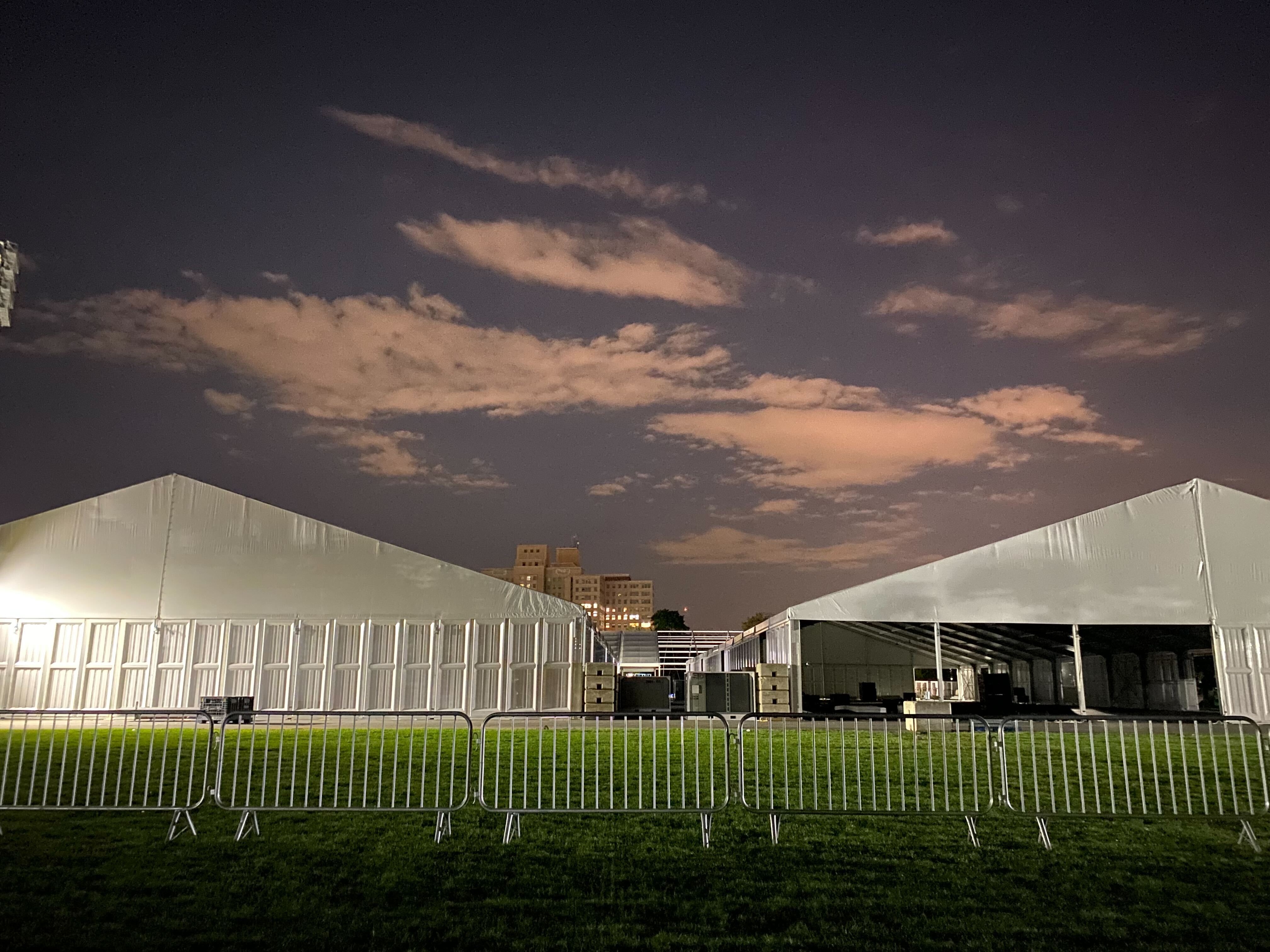 Workers have begun erecting a series of sprawling tents in vacant parking lots beside Icahn Stadium on Randall’s Island, preparing for the continued arrival of asylum seekers on buses from the southern border.

The cavernous tent structures began to take shape Monday, with fold-out cots and tables visible from a public walkway around the new facility.

The Randall’s Island tents are expected to provide temporary shelter for 500 adults as the city’s homeless population has ballooned with the arrival of migrants sent to the city on buses, mostly from Texas. They’ve been dubbed “Humanitarian Emergency Response and Relief Centers” by the Adams administration and the city has promised asylum seekers will be able to get access to food, medical care, case work services, and help finding shelter after their stay.

People will spend between 24 and 96 hours at the sites, or potentially longer “depending on the situation,” the administration said.

Mayor Eric Adams had earlier proposed the plan for a parking lot at Orchard Beach, but changed course after a rainy weekend caused flooding there. Advocates have pointed out the Randall’s Island site is also located in a floodplain, according to maps from the Department of City Planning.

Adams has said the city is looking for additional sites for families, though it’s not clear where those might be.

It’s unclear when the city will begin sending asylum seekers to the camp site. A spokesperson for Adams didn’t return a request for comment right away. Gov. Kathy Hochul indicated she’d send members of the state’s National Guard at the mayor’s request, the New York Post reported.

The move to house asylum seekers in camps has been widely criticized by advocates for immigrants and for homeless New Yorkers. But Adams has rebuffed criticism so far and, last Friday, he declared a state of emergency, allowing his administration to circumvent certain land-use requirements to be able to build the camps more quickly.

The declaration comes as the number of people seeking refuge in the city’s shelter system has grown exponentially in recent months. There were at least 45,000 people in city shelters in April of this year — now there are more than 61,000, according to daily data from the city’s homeless services department.

According to figures released by the city last week, 17,000 asylum seekers have arrived in New York City since the spring. To handle the influx, the city has opened up 42 emergency shelters. Roughly 5,500 children have enrolled in public schools, Adams said.

Last week, the number of homeless adults hit a record high, dating back to 2013 when the city began publishing daily data. The overall number of adults and children was nearing a record as well, with just 36 people fewer than a 2019 high of 61,415 people on Oct. 7 — the most recent figures available.

Around six buses continue to arrive at the Port Authority each day, greeted by volunteers with the group Team TLC, who provide food, donated clothing, and supplies.