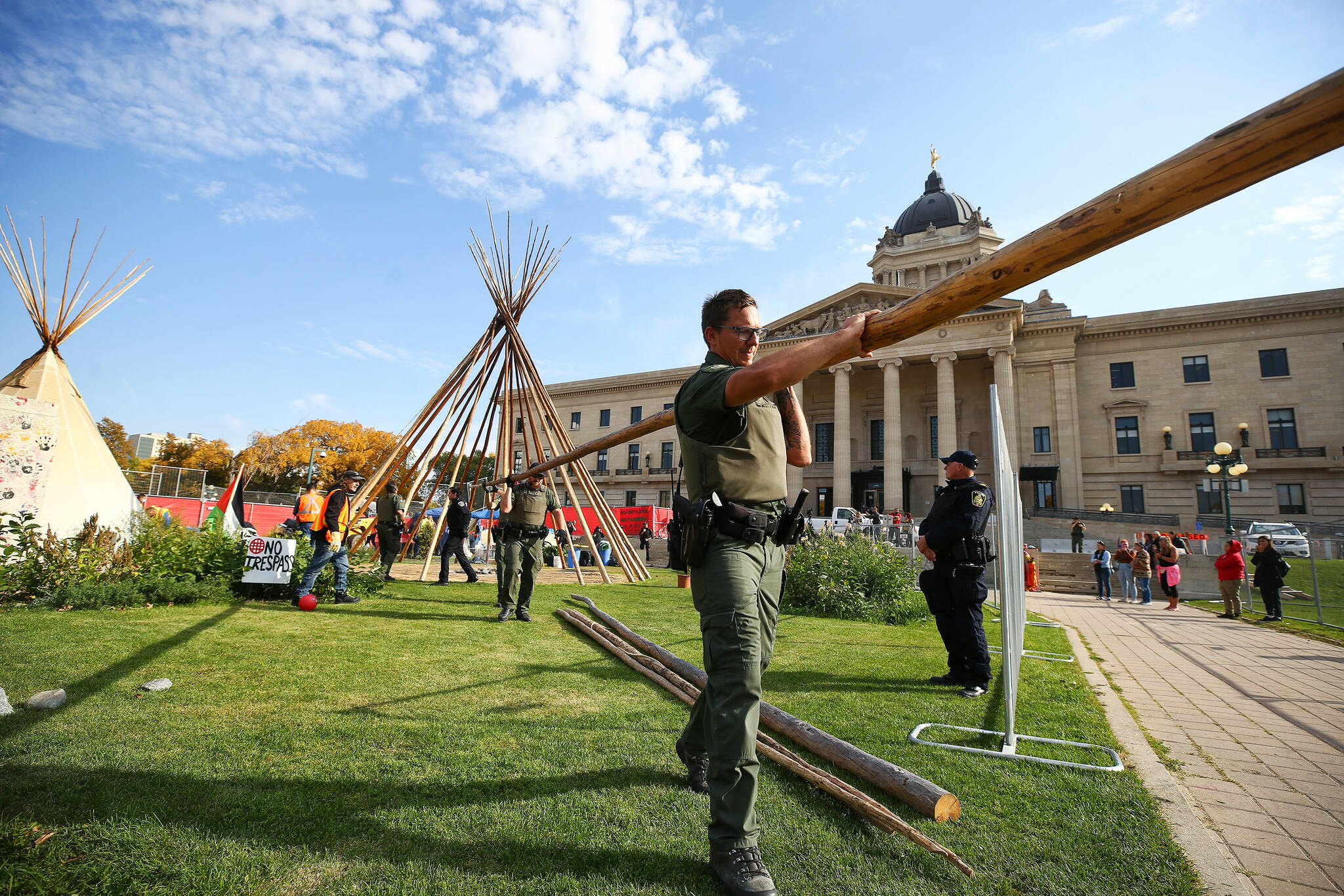 Sixty officers carefully dismantled a teepee encampment outside the Manitoba Legislative Assembly on Tuesday as a handful of protesters from the revamped version of the “freedom convoy” heckled them.

“You are destroying my house, I am destroying your house,” a woman shouted at officers who converged on the area where additional security fencing was erected for the occupation’s withdrawal.

“There’s no COVID,” shouted a man from the encampment they called a “law lodge” that had illegally occupied the legislature grounds for at least three months. New security legislation that came into force on June 1 prohibits camping in the legislative precinct.

Supporters said they did not recognize the government or its laws and berated journalists whom they accused of being paid by the government. The illegal occupation ended on Tuesday. On Monday, police blocked supporters from delivering more poles to erect a third teepee.

Winnipeg police say weapons were found in the camp and at least seven people were arrested on Monday. They were charged with obstructing a peace officer and depositing articles in the legislative precinct that justify an extended stay.

On Tuesday, the camp leader and at least two other people occupying the Legislative Assembly lawn were arrested for breaching the peace. ‘Clan mother’ Si Pih Ko, also known as Trina François, was handcuffed and placed in the paddy wagon for breaking the peace. The same goes for Phil McLellan, who spoke to reporters on Monday about officers preventing the delivery of “necessities of life” to the encampment, and claimed that police used brute force in Monday’s arrests.

“Winnipeg Police and Manitoba government officials made the decision to dismantle the camp today following escalating threats of bodily harm, indication of weapons and aggressive behavior by occupants of the camp. north camp,” police said in a news release Tuesday.

Conservation officers dismantled two teepees pole by pole and loaded them onto a flatbed truck. Cooking tents, a fire pit, firewood, a gas grill and an accumulation of household items and furniture were loaded onto trucks and taken away.

As crews continued to dismantle the final teepee, at least two people wearing face coverings and what appeared to be a protective vest rushed to the north fence, shaking the chain link, before police swooped down. approach and people do not disperse.

When a Bobcat bulldozer removed the last debris, Sagkeeng First Nation elder Mary Starr was not sad to see the camp disappear.

“There’s a lot going on here that concerns me deeply,” Starr said as he watched the North Lawn encampment be demolished. She was part of another encampment set up on the East Lawn of the Legislative Grounds in June 2021 to tend a sacred fire until all unmarked graves at the former residential schools were identified.

The Fort Alexander Indian Residential School survivor said she had nothing to do with the North Side encampment, but stopped by Monday night.

“All I saw was a bunch of young kids getting fucked up and they got ‘legal lodge’,” she said, pointing to a sign in front of the dismantled teepees. “I say to myself ‘the legal lodge’? Is this how they want to go – with a bunch of stoned kids? “, She said on Tuesday.

Starr – who is also known as Danko Makwa Kaypeytashete, which translates to Great Grand Mother Bear Who Comes Like The Wind – said she supported Si Pih Ko/Francois when she went to Alberta and sang a protest version of O Canada to Pope Francis.

“I thought she was very brave and brave to do this, but when I see a mockery of what’s going on here, then my support started to dwindle,” she said. “There are a lot of non-natives here who speak for him,” Starr said.

The Sagkeeng elder hopes the Holy Fire Camp on the east side can stay and plans to discuss this with the government.

Justice Minister Kelvin Goertzen described Camp on the East Lawn as an “operational problem” and said Winnipeg police were the lead law enforcement agency on the matter.

Goertzen said security concerns over the camp on the North Lawn had escalated in recent weeks, prompting law enforcement officials, led by Winnipeg Police, to move in.

“Ultimately, we were hoping for a different kind of resolution,” he said.

The ruling Progressive Conservatives have not provided direction to law enforcement on how and when to respond to security concerns, Goertzen said, but added that the province expects laws be applied.

“The police ultimately decide in terms of enforcement, so the police decided, you know, today and (Monday) you saw actions based on their own decision-making process in terms of when and how act,” he said.

Members of the camps on the North and East Lawns received eviction notices on August 17 and were ordered to vacate the premises within a week. However, Goertzen acknowledged that activity at both camps had intensified following the advisory, with the encampment on the North Lawn increasing in size.

Fences now surround the North Lawn of the Legislature to prevent structures from being raised again.

“It means a lot to me that this house, this building feels like it belongs to Manitobans, but it can only feel that way if we all respect it as a place to be safe and as a place to come and have your views heard but not to come and stay and make others feel unsafe,” the justice minister said.

The province said the teepees have been “dismantled with care and respect and will be stored in the same manner and returned to their owners.”

Earlier in the day, an assembly to honor the National Day of Action for MMIWG2S+ in the legislature was held without interruption, police said.

— with files by Danielle Da Silva