Eagles camp diary: DeVonta Smith has a big day back in practice 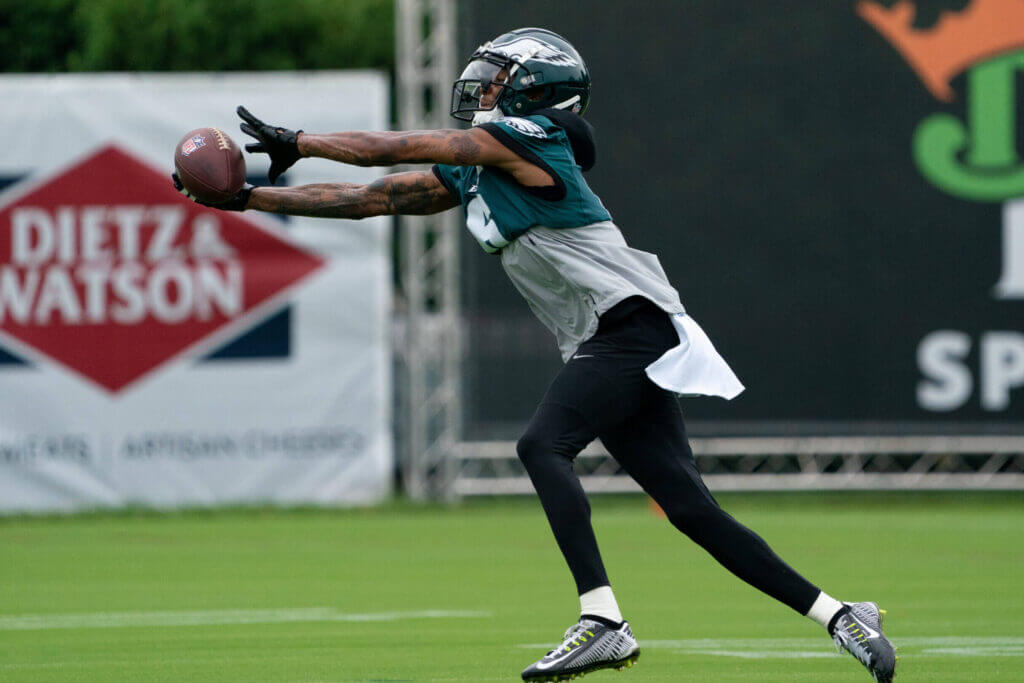 The Philadelphia Eagles returned to practice Sunday for their first session since Friday’s preseason opener. The workout included the return of a key player and the first notable fight(s) of the summer. Here is a race log:

10:00 a.m. – The Eagles are in great shape and some key players are coming back from injuries.

Most notable is wide receiver DeVonta Smith, who has been out since Aug. 4 with a groin injury. The Eagles remained cautious on Smith’s recovery, but the team eventually reunited the AJ Brown-Smith duo.

“I wouldn’t say it was frustrating,” Smith said of his absence. “It was more about getting better and being out there and coaching guys. Something I see they don’t see after practice. … If anything, it helped me to be there (and) to be able to watch more, see more.

Kenneth Gainwell also returned to training with a hip injury and was the top running back on Sunday. Cornerback Jimmy Moreland (ankle) and wide receiver John Hightower (groin) are back on a limited basis.

Among the new players on the injured list is running back Miles Sanders, who watched practice from the sidelines with what the team said was leg pain. Sanders wore a sleeve on his right leg. Tight end JJ Arcega-Whiteside is not in practice. The team says it’s not injury related. This is something to watch for in the coming days.

Wide receiver Britain Covey has a thumb injury which has limited him to practice, although it is not as serious as initially reported after the game.

“He can do a lot of things, like he’s a good punt returner, he can play in the slot or sometimes he can play outside. He told me he could be a priest, but he wasn’t a doctor,” coach Nick Sirianni said of Covey’s initial diagnosis. “I will tell him to keep his doctor’s opinions (to himself). But he has a sprain. He said torn ligaments and that’s not it. That’s why he should focus on what he’s doing.

10:13 a.m. — There’s usually little to report on those early special teams periods, but it’s worth mentioning Brown catching punts. Don’t expect this to happen in games. An interesting experience, however. …

It’s a good time to point out some celebrity sightings in training. Philadelphia 76ers president of basketball operations Daryl Morey came to the NovaCare complex and watched from the sidelines, chatting with Eagles general manager Howie Roseman and Sirianni before practice. (Chances Kevin Durant’s name came up in conversation?) Former Eagles running back Darren Sproles is in town and helping the punt returners. And former Eagles guard Brandon Brooks, who lost weight in his first summer of retirement, also stopped by to watch his first session as a football civilian.

10:30 a.m. — The Eagles begin a period that will not be used for the “Jalen Hurts breakout year” campaigns. A pass attempt to Smith was denied and hit the back of Avonte Maddox’s leg. There was another through pass to Quez Watkins which Darius Slay interrupted, although a better placed ball could have netted a big win. Hurts was able to hit Brown during that streak, except the play could have been called off due to a sack. The third-year quarterback had a great preseason debut and got the ball in good spots, so there’s no need to worry about a practice stint. And he was also better with his ball placement later in that session. But it was not a flawless start.

10:36 — The Eagles began trimming their roster with the announcement of two trades: offensive lineman William Dunkle and linebacker Ali Fayad were both released. Both are undrafted rookies. The Eagles have until 4 p.m. Tuesday to reduce their roster to 85 players. Five more are to be eliminated by August 23, with the roster of 53 players set by August 30.

10:43 a.m. — The highlight of the day’s offense came in that seven-on-seven series when Hurts hit a leaping Smith, who timed his jump to grab the ball high on Maddox and Zech McPhearson. The two defensive backs crossed each other trying to make the play. If they had stayed up, maybe we could have gone down with an interception. The result matters most here: with no one behind Smith, he had space to kick the ball in for a score.

“Just go play a game, that’s what it was,” Smith said. “They played Cover 2, they were in the right places. It was just about making a play.

Looking at my notes after practice, I often see “6”. He had a quiet first week of camp before the injury. That changed on Sunday. Smith enjoyed the busy day I expected from him this season.

“I wouldn’t say that was the plan,” Smith said of his active morning. “Just the covers played by the defenses, I happened to be in the position where the ball was coming towards me.”

There were a few notable defensive notes from this series:

10:46 — The most notable play of a series with the second teams was a sack by Brandon Graham two games after stuffing a run. It still seems hard to believe Graham is on the second team, but it’s a testament to the Eagles’ depth on the defensive line. Graham’s strong camp continues.

10:52 — While I’m watching seven-on-seven, Bo Wulf is calling one-on-one between the O-line and the D-line. Here’s what happened, according to Wulf:

The climax of the offensive line-defensive line heads-up came following a rep between offensive tackle Andre Dillard and defensive end Derek Barnett. Dillard did well to resist a power rush attempt from Barnett. After the rep, the two appeared to talk to each other for a moment before Barnett grabbed Dillard’s face mask and pulled down, sparking the camp’s first real fight. Things broke down quickly, although it wasn’t Dillard’s last fight of the day. He and Barnett have something of a history, with a notable fight two summers ago.

During the remainder of the drill, Sweat over Jordan Mailata (something of a rarity in camp so far), Patrick Johnson rushing around Jarrid Williams, Kobe Smith swimming inside Sua Opeta, Tarron Jackson hitting Kayode Awosika on his back and Milton Williams beating Opeta. Josh Sills picked up kills on the offensive line for holding off Marvin Wilson and Renell Wren, Jack Anderson blocked Jordan Davis and Cameron Tom stopped Wilson in his tracks. Sills is a player to watch. He moved up the depth chart at left guard for the second team on Sunday and showed versatility when it comes to guard tackle.

11 a.m. — The Eagles are working on save situations – an 11-on-11 period when the offense is saved against its own goal line. The last two games for the first team before a turnaround: Gainwell caught a pass, but Kyzir White stripped him and the streak was over.

When the starters returned to the field, a run was stuffed and Hurts looked for Smith on back-to-back passes. The first was a large receiver screen for a modest gain. The second was to Smith in the middle, but he was parried by TJ Edwards. Smith got up, avoiding an injury. It could have been dangerous.

The biggest advantage of this series has been the success of the defense. He dominated the attack throughout the day, but the attack in particular could not move anything in retreating situations.

11:08 — Still in a backup situation, Dillard embarks on his second arm wrestling match of the day. This time he confused it with Johnson. It didn’t seem too bad, but Dillard’s temper is worth watching in training.

Johnson, by the way, continues to have a great summer. There’s a big gap between Haason Reddick and Johnson, of course, but Johnson is second in line for the strongside linebacker spot.

11:21 a.m. — Hurts makes his best pass of the day. He found Watkins on the left sideline for a well-placed deep ball. The Eagles haven’t stretched the field often this summer, and Hurts has been inconsistent earlier in practice. Not here. Watkins, who suggests he’s the fastest player in the NFL, did a good job getting past the defense. Hurts’ deep passing is something I’ll be paying close attention to next week.

11:23 a.m. — Dillard’s third and most notable practice fight. Johnson, who challenged Dillard after a scuffle, is on the other side for the second time in minutes. Dillard’s helmet fell in the hubbub. After his breakup, Dillard is evaluated by the training staff and even Roseman came along.

Dillard, who ran out of time last week with a concussion, then walked off the field with chief medical officer Arsh Dhanota before practice was completed. Usually players go to the injury tent. Not this time.

As a rookie in 2019, Dillard was involved in a practice fight which left him moved after the session. Roseman also came to talk to Dillard.

11:30 a.m. – Practice is over after 90 minutes. The Eagles have a visit Monday and return Tuesday for the final practice at the NovaCare Complex before heading to Cleveland for this week’s joint practices against the Cleveland Browns. Look for the starters to have a heavy workload in those sessions, and maybe not much (if any) playing time in next Sunday’s preseason game.