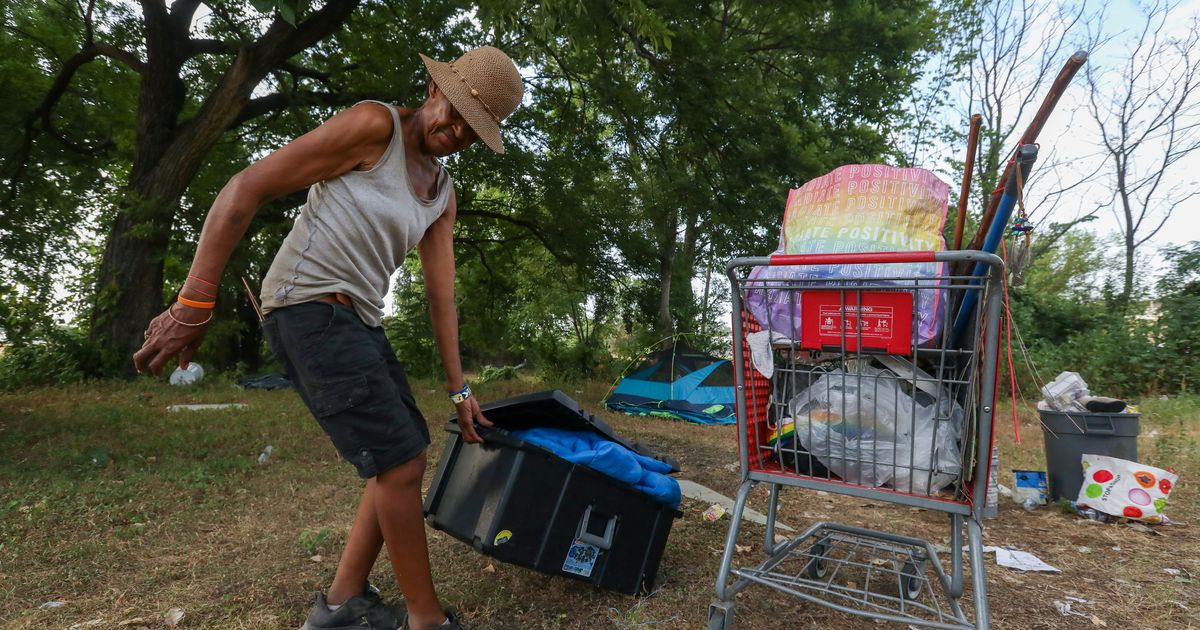 Dallas is adjusting its approach to homeless encampments in response to activist resistance to a sweep earlier this summer. Updated cleanup advisories, the provision of cleaning supplies to some camps, and a new law enforcement strategy are all part of the mix.

“We’re changing the way we do the cleaning because we realize it was a problem,” said Christine Crossley, director of homeless solutions. “We also realize that some people might show up with guns, and I think we need to have a collective response.”

The changes come after activists and volunteers, some of whom were armed, showed up for a July camp cleanup on Coombs Street in South Dallas, cutting city workers off from the camp and prompting the city to delay the scan.

Activists and locals feared that those who did not leave the camp would be forced to do so and their belongings thrown away that day. The city later said it had decided to take a more collaborative approach to camp cleanup, although that was not what was communicated.

One of the city’s hopes is to prevent such incidents by providing clearer language on notices distributed to camp residents about upcoming sweeps, something officials are currently working on. Another is to take this collaborative approach: helping residents of certain camps keep their areas clean by providing them with cleaning supplies and equipment.

In cases where activists show resistance against city workers, a new security strategy that calls for varying levels of law enforcement involvement will come into play.

While better communication is welcome, said Julia Paramo, who is a member of the Dallas Sunrise Movement and often works with camp residents, it will take work to rebuild trust.

“The city gives us many reasons not to trust them and that’s partly why the locals themselves don’t feel very comfortable working with the city,” Paramo said. “They should try to work with the residents of these camps.”

She added that activists and volunteers who work with the homeless are worried about the new security strategy and that many camp residents are not yet aware of it.

Camp residents usually receive 72 hours notice of scheduled sweeps in the form of a paper telling them to move their belongings from the area. Whatever remains is removed by city workers who regularly use small bulldozers, claw trucks and other heavy equipment to get the job done.

Crossley acknowledges that operations often displace people, especially when shelters are overflowing and housing is lacking.

“A lot of people, if you’ve already made the effort to move your stuff, are probably moving somewhere else,” she said, adding that unless a camp is officially closed, the city isn’t preventing people to move. return to the region.

When the city swept through private land earlier this year, bulldozers and trucks entered the area tearing up abandoned tents while some people were still gathering their belongings nearby. A brief confrontation ensued when a bulldozer came dangerously close to a group of residents.

Crossley said the city is aware of the danger and is making sure to be aware of residents when using the equipment. “You wouldn’t run a cat [bulldozer] next to someone sitting on a lawn chair,” she said.

For some larger camps that have a longer history, Crossley said the city now uses an approach that involves residents in the cleanup process, which limits the use of heavy equipment and doesn’t require them to leave the camp. area.

“We saw an opportunity that we can act on,” said Marci Jackson, Community Liaison Officer for Homeless Solutions. “In areas where we can clean up and not necessarily have them moved, we can do that, and that’s what we will do.”

In these cases, homeless solutions, along with code compliance and city marshals, will provide camp residents with rolling carts and cleaning tools, like rakes and gloves, as well as bags. trash cans to pick up debris in the area.

However, most of the time, camp residents will still be required to pack their things and leave during sweeps, and for those cases, the city is currently working on updated wording for the notices they distribute.

Updated language on the area to be cleaned will include addresses and specific cleanliness expectations, said Crossley, who added that he wanted to give people five days’ notice before sweeps, rather than three days.

When asked if the city could use the collaborative approach in more places, Crossley said lack of resources and manpower was a major issue.

“I think it’s just a capacity issue. We don’t have the capacity to do that at every site,” she said.

The goal of the cleanups is to keep the sites safe and hygienic until a new relocation program can help residents, she said. Moving residents to units can take weeks and the program cannot be everywhere at once.

Volunteers and activists are aware of the new security measures and many camp residents The Dallas Morning News I spoke with were unaware of the policy changes.

The new security memorandum defines several levels of law enforcement involvement based on who is present during camp sweeps and their active resistance to city workers.

By default, City Marshals accompany City Workers to a given site with Neighborhood Police Teams on standby. The police only enter the scene when activists are expected, in which case a high security police intervention team will be prepared as reinforcements.

In the event that a camp closure is planned and there is anticipated resistance from activists or armed protesters, Dallas police will issue advance warnings “encouraging peaceful protest” and inform the mayor and city council that any arrests will be made.

Will Brown, a longtime resident of the Coombs Street camp who was there when the confrontation happened in July, said he was unaware of the new security measures. When asked what he thought, he shrugged.

“It depends on the situation,” said Brown, who helped referee the matchup at the time. “We’ll just have to see.”

Brown added that city officials did not release their plan for the camp on the day of the meet, but felt things had escalated in an “unnecessary” way.

Many of the armed protesters present were part of the Elm Fork John Brown Gun Club, which said it was troubled by the new strategy in a statement provided to The news.

“We are concerned about the hostility of the city government and the implicit willingness to premeditate false arrests,” the group said. “The presence of armed police and massive displays of force are nothing new. Earlier this year, they showed up with half a dozen giant claw trucks and dozens of cops to destroy a large camp.

While the new strategy indicates that the presence of open-carried protesters is a factor when considering the level of law enforcement response, Brown clarified that “carrying a weapon in the open does not constitute a be a threat”.

“A threat would exist if a weapon was pointed at or in the direction of an individual or if a verbal threat was made against an individual,” she said.

Crossley said no guns were pointed at the workers that day, but they still felt shaken. For them, they hope that clearer communication and closer collaboration with residents will prevent such cases.

“We are a municipality, but we are human,” Jackson said. “We want to work with the community, we cannot do it without the community… Our initiatives succeed when we have this collaboration, but it must be effective.