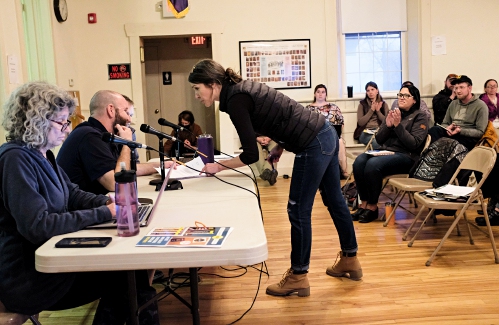 Voters have been asked to meet at 9 a.m. Saturday morning to consider whether to reverse a drastic cut in education funding approved on March 12.

New Hampshire law makes it difficult to revise a school budget. Below is an explanation of what brought Croydon to this pass and the process for the re-vote:

This winter, the Croydon School Board offered voters a 2022-23 budget of $1.7 million to fund K-4 Croydon Village School and pay school fees for Croydon students in grades 5-12, who have the choice of school for middle school and high school. The proposed budget was $98,000 over current year expenditures.

On March 12, attendance at the school’s annual meeting was very low. A motion was brought forward by resident Ian Underwood to cut the school’s budget to $800,000; it was approved by a vote of 20-14.

He wrote a brochure which he distributed at the meeting and also posted “in case anyone else wants to try something similar in another district”. Underwood claimed that since two private schools – one in Sunapee and one in Newport – charge around $10,000 for tuition, Croydon should be able to educate all of its schoolchildren for a similar sum per pupil. He arrived at his total budget by multiplying that total by 80, roughly the number of students in the city.

Underwood is the husband of Jody Underwood, the chairwoman of the Croydon School Board, and a supporter of the Free State Project, an effort to foster libertarian politics in New Hampshire.

In meetings after the March vote, Croydon school officials said the only way to provide schooling for Croydon pupils for $800,000 is through private companies who offer a ‘micro-school’ in line.

Even then, the district would be well below what families are used to, school board members said. About $973,000 of the $1.7 million budget proposal was for public and private school tuition for students in grades 5 through 12. Without enough money in the budget, it would force parents to pay out of pocket to send their children to public schools in Newport, Sunapee and elsewhere for both education and technical instruction.

Jody Underwood said she didn’t know about her husband’s plan to cut the budget until days before the meeting. Now she and fellow school board member Aaron McKeon are urging residents to stick to the $800,000 budget. The third, Kevin Morris, said he would like school spending to be capped at the current year’s budget amount of just over $1.6 million.

The people of Croydon have asked to reconsider the school budget and the school board has set the date for the vote for May 7. Revote supporters have created a website, standupforcroydon.com.

The reconsideration rules are complicated. Under New Hampshire law, a budget can only be put to a new vote if more than 50% of the voter checklist shows up in person. The vote will take place at Camp Coniston, 24 Camp Road in Croydon, the only venue in the city large enough for such a gathering.

When the petition for the vote was filed, there were 565 voters on the checklist, meaning that for a binding vote to take place on Saturday, a quorum of 283 voters must be present.

However, since an election date was set, a further 52 people have registered to vote in Croydon, Town Clerk Kristi McKeon said on Wednesday. Under state law, those voters can show up on Saturday, but the number required for a quorum on Saturday remains at 283.

Eligible Croydon residents who wish to register to vote can do so at Camp Coniston and are encouraged to be there by 8am, McKeon said.

Revote supporters encourage all who attend to arrive early so they can check in before the meeting starts at 9 a.m.

A final decision on the amount of the budget on which the voters will vote will be taken by a majority of the votes of those present.