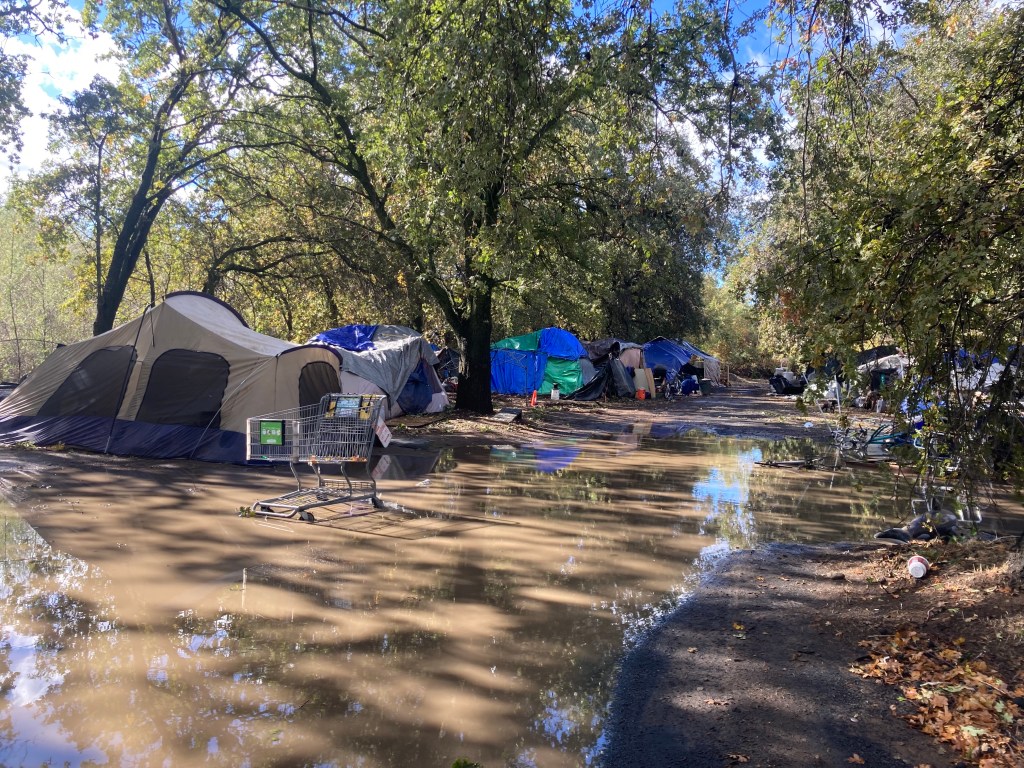 CHICO — Cold bodies, mangled tents and puddles of mud sum up conditions on the Comanche Creek Greenway in the aftermath of this weekend’s storm. For hundreds of homeless residents, Monday morning was spent scraping away debris and water to collect belongings that survived the storm.

“It was the equivalent of Hurricane Katrina for homeless camp,” said Comanche Creek camper Mickey Flowers. “Every dwelling of any kind here has been compromised or destroyed. Some of them were actually washed away by the stream.

Although some people moved their camps away from Comanche Creek’s waterbed, high winds and relentless rain brought the struggling community under control. Tents that were undisturbed by the wind waded centimeters deep in the water.

Without help from the town of Chico, community members took matters into their own hands. With just three hours of preparation, Safe Space partnered with First Baptist Church to house 33 people in the church’s social hall from Sunday afternoon through Tuesday morning.

“We tried to triage, thinking there were hundreds of people between Comanche, Tiger and other areas, so we couldn’t accommodate them all,” Safe Space’s Rick Narad said. “We thought if people had a car they could sleep in or a friend they could stay with, then they were a lower priority than people sleeping in tents.”

Dozens of community members offered meals at the church and dropped off boxes of dry clothes for those who were soaked and forced to abandon their only clothes in the flood.

On Friday, in an effort to reduce the impact of the storms, the city set up public works crews to carry out street cleaning and clean storm sewer grates and pipes, but did not approach homeless residents. .

“The city, to my knowledge, has no plans to support people living in our public spaces during this severe weather event, especially those most at risk from flooding,” Councilman Alex Brown said. “I have personally contacted city staff because when we find ourselves in dire straits, especially when the less resourceful among us find themselves not only in a situation that will result in the loss of personal property, but in a situation that could lead to injury or worse, I believe it is the responsibility of the city to intervene and do something about it.

As of noon Monday, the city had yet to contact those affected by the storm at the Comanche Creek Greenway.

“For issues related to emergency accommodation, there are still spaces available at both Torres Shelter and Jesus Center to support those in need,” City Manager Mark Orme said. “Specifically related to homelessness, the settlement process is underway, progress is being made and continued patience is being asked of the community.

With the city unable to make pointed statements on homelessness, due to orders from a federal judge, community members like Pastor Gail Hill of First Baptist Church, are encouraging other citizens to come together and giving back to those in need as homeless residents return to the streets on Tuesday mornings.