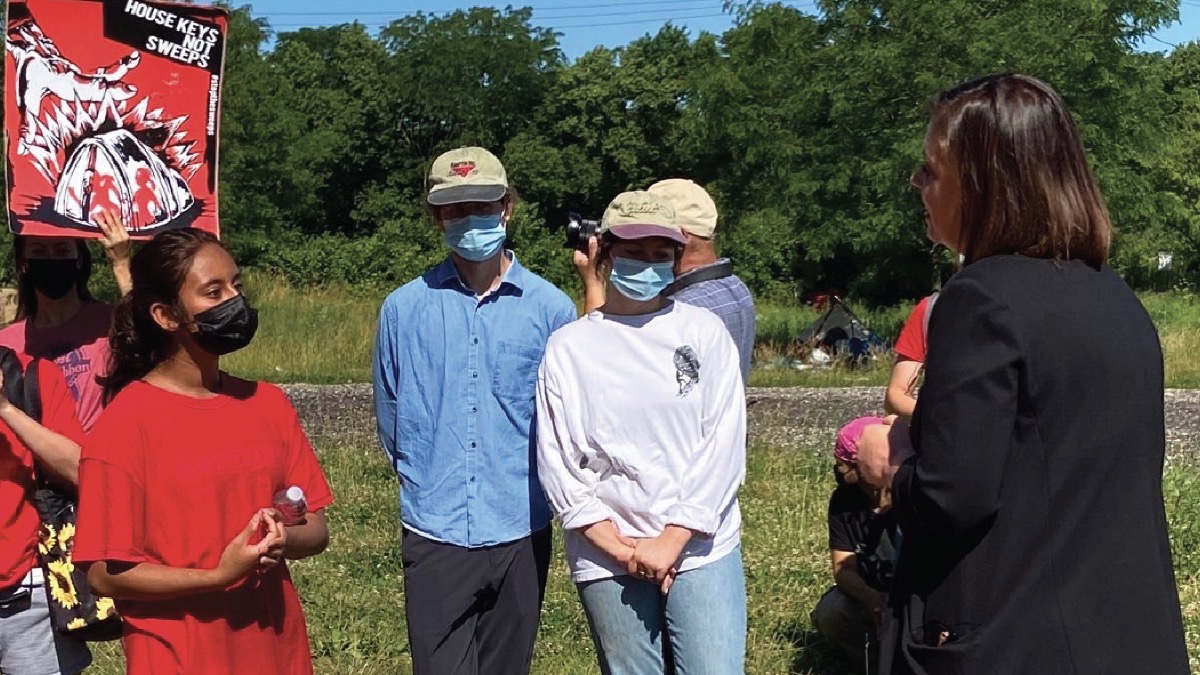 On June 21, the City of Columbus, Ohio, and the Columbus Police Department evicted and destroyed the homeless camp located on the abandoned Heer Park lot in the far south end of the city. The sweep of the camp follows a long streak of threats, harassment, arrests and terror inflicted on the homeless by the CPD and the inaction of the city and their aligned social workers. The Heer Park camp — which has existed for 10 years — was occupied by some 25 people who had been rejected by the capitalist system and left to survive on their own.

Community group Heer to Serve and the Party for Socialism and Liberation Columbus have stepped up to fill the critical void left by the state by providing life-saving items like tents, food and hygiene products. , and offering harm reduction and fighting for the right to housing. On June 21, activists stood with the homeless community to demand that housing be a human right and that the city of Columbus stop sweeps.

As people grabbed what they could, police moved in to mark off areas of the woods where people had camped. With more than 20 squad cars and even more officers, an excavator and bulldozer crushed the remains of people’s tents and belongings, while threatening to arrest anyone in the vicinity. While claiming to be spraying honeysuckle, the city sprayed dangerous pesticides on the remains of the camps to keep people from returning.

Flanked by city-aligned social workers and city officials, police blamed camp residents for their conditions. Sergeant Ed Daniher said the residents of Heer Park didn’t really want help. When the activists refused, a social worker from Maryhaven told them: “If you are so passionate, put them in your garden. This sentiment was echoed verbatim by several police officers. Social workers from the Make-A-Day foundation also mocked the activists and even made misogynistic comments towards a local documentary filmmaker.

City officials — from the public relations office to police attorneys to Emerald Hernandez-Parra of the Columbus Development Department — have said time and time again that they’ve done everything they can, but they provided no housing options for those they evicted that day. Hernandez-Parra, who signed the eviction papers, said they couldn’t “drop anybody in a house right now.” Matthew Meyer of PSL Columbus said Release News that the city demonstrated capitalism’s emphasis on property rather than human lives. “We are involved in the struggle for housing because under capitalism everything is commodified, including housing,” Meyer said.

This was all too apparent when CPD officers claimed to represent Casto – a commercial real estate agency – and they threatened to arrest anyone on “private property”. Officers mocked activists for crying during camp sweeps, quoted scriptures and said activists should house those in Heer Park themselves. An officer set a five-minute timer on his phone and said they would arrest the activists if they stayed any longer. With 30 seconds remaining, she told the activists to “run”.

Hannah McCoy, an activist with Heer to Serve, said Release News that it was “sickening” to witness this situation. “It was my first time at an actual sweep, so I wasn’t sure what to expect,” McCoy said. “To see such a police presence, the negative feedback and attitudes of ‘outreach’ workers and even contractors not caring at all about people’s homes being destroyed was heartbreaking.”

Despite the state’s best efforts, Heer to Serve and PSL Columbus will continue to serve the people while building a movement that fights for the homeless community. “As housing continues to gentrify, if you can’t keep up with rising rents, you have no alternative,” Meyer said. Release News. “Housing is a human right that should be available to everyone.”