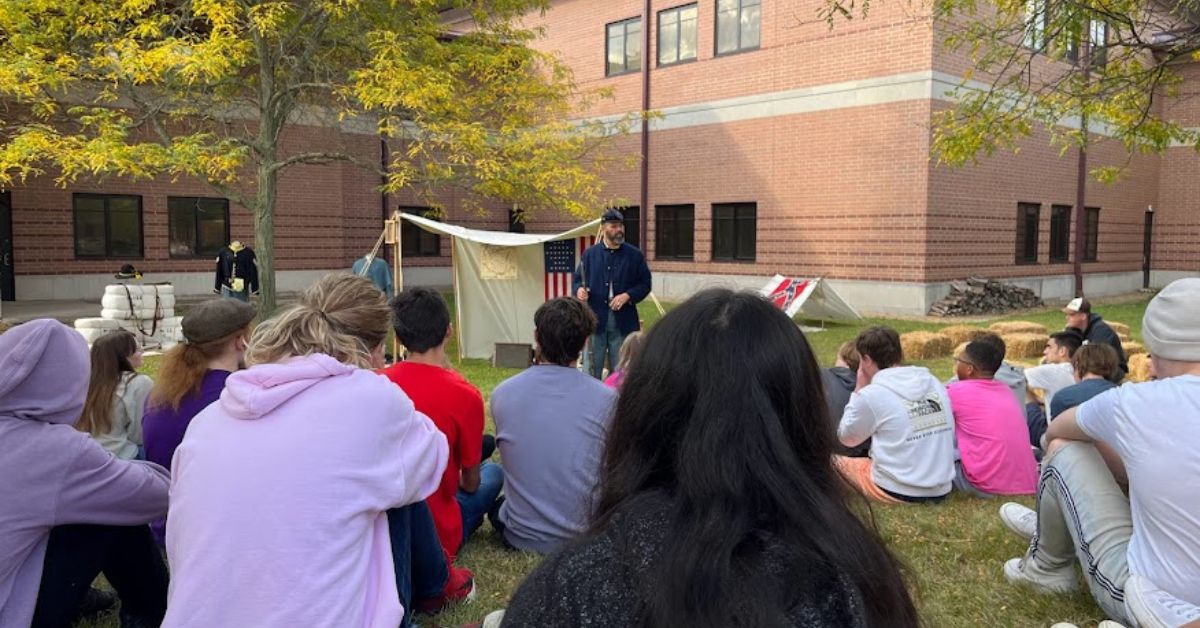 Chesterton High School (CHS) history teachers Robert DeRuntz and Anna Zervos hosted the annual Civil War Camp this month. The schoolyard mimicked the humble setting of a traditional Civil War camp. Over the course of two days, students from all history classes across the United States came to a recreation of an 1862 Civil War camp. Tents stood in the grass with unique artifacts inside. era scattered on the fabric.

DeRuntz and Zervos both teach US history classes at CHS and helped bring a piece of textbook history to life. Dressed in historically accurate Civil War soldier attire, DeRuntz responsibly demonstrated the workings of a replica Civil War-era black powder musket to students, as well as delving into character so to anchor its audience in the events of the Civil War. Students were metaphorically drafted into war to combine personalized storytelling and history lessons as a distinctive learning environment.

A student chosen from the United States History class group stood in front of the group to display every piece of clothing and accessory a Civil War soldier had to make. The selected student displayed each item while DeRuntz shared its use with the classes. Each piece of the set had a specific historical significance. By expressing the importance of clothing, students were able to grasp the commonalities and purposes of items and necessities that developed over time.

As the students came to sit on laid out bales of hay, Zervos cooked traditional salt pork over a fire. Students were served bean soup in sample cups and baskets of hardtack and salt pork cubes. As the food baskets were served, Zervos described the foods soldiers ate during the Civil War, in addition to sharing the severity of medical procedures during that time.

With a dummy on a table, Zervos explained the steps a nurse should take to properly perform an amputation in a Civil War camp.

To wrap up the interactive performance, DeRuntz recited the Gettysburg Address, leaving a hushed crowd to burst into applause.

Each year, Chesterton High School’s student government hosts Hall-o-ween; an event where after-school clubs can set up tables in school hallways for people to enjoy.

This year’s Hall-o-ween will be held inside Chesterton High School on October 27 from 5-7 p.m. specific theme where members dress according to their respective theme.

The student government has orchestrated this fall rally for more than five years. However, due to the COVID-19 pandemic in 2020, Hall-o-ween was changed to be a chest or treat in the parking lot at Chesterton High School.

In the past, a school hallway was decorated to look haunted. Popcorn has also been sold in the past when the event was held.

Community members are encouraged to wander the halls, finding different clubs from which they can do tricks or treats. Staff and students are also welcome to the deal.

Robert DeRuntz has taught history at Chesterton High School for 28 years. Graduating with a history degree from Ball State in 1995, DeRuntz has only ever taught history at CHS. DeRuntz approaches his history lessons with a remarkable technique – that of turning his lessons into stories so that the material is something tangible and memorable for the students.

“I started out teaching history and geography and eventually moved on to US history and world history. I love it; I really like. When I was a little boy, my dad had all kinds of history books, so I grew up looking at the maps and looking at the pictures, and then I was old enough to read them. I’ve always loved history, and when I graduated as a history teacher, I knew I wanted to be the kind of teacher who went out of his way to bring stories to life,” DeRuntz said.

Trailbound, an annual summer trip hosted by the CHS Department of Social Studies, allows students to camp and study history first-hand at historical and geographic sites across the United States. Over the summer, Trailbound allowed students to travel to the Adirondack Mountains, as well as see Niagara Falls and New York State.

The students studied French and Indian warfare during the trip.

“I truly see Trailbound as one of my greatest blessings, not just professionally, but also personally in my life because I’ve traveled this country for 23 years and every summer a different part of the country. We sight-studyed any historical subject we have,” DeRuntz said.

DeRuntz was also noted as Staff Member of the Year (2019), Duneland School Corporation High School Teacher (2020), and Indiana Teacher of the Year Top 10 Finalist (2021). Believing in the value of education has certainly characterized DeRuntz’s dedication to community and students. His love of teaching is central to the enriching culture of the CHS.

“I honestly think that if I were to leave Chesterton today and go to another school, I would never be able to do the kinds of things that I’ve had the chance to do here,” DeRuntz said.

Sophomore Logan Arthur participates in an array of school clubs and extracurricular activities at CHS. Arthur is an active member of the German Club, Spell Bowl, Tennis, Orchestra and CHS Fall Musical, “Joseph and the Technicolor Dreamcoat”.

“I think CHS is really good because it offers so many clubs and so many varieties of things,” Arthur said. “You don’t just have to come to school and leave, you can do other things and you don’t even have to stay in school, you can do internships.”

Each school year, the CHS organizes a fall musical, a winter play and a spring play. Having participated in theater during his freshman year, Arthur developed an admiration for acting.

“I really hope to do more plays because I really like acting,” Arthur said.

Arthur aims to join the show choir during one of his high school years. In addition to having a penchant for music, he also plays tennis.

“It takes a bit of time. I have to study a bit more outside of school and have later parties, but I do it because it’s fun,” Arthur said.