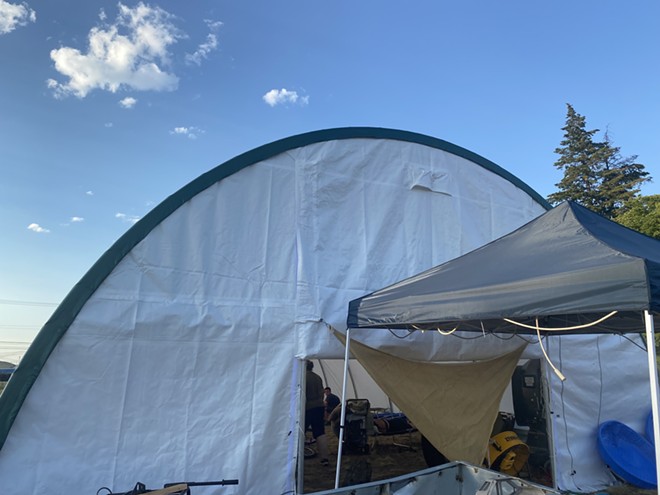 The Camp Hope Cooling Center has fans, water misters and space for 150 people.

A cooling shelter erected to protect over 600 the homeless from a heat wave were operational on Monday – despite the city’s order that the shelter go down at 9 a.m. that morning.

The order to remove the shelter came last week, when the city told the Washington State Department of Transportation (WSDOT) that the agency had a “legal responsibility to protect the property from construction activity. illegal”. In a notice of violation sent July 28, Spokane’s fire marshal said the shelter — which is on WSDOT land — must come down by 9 a.m. Monday or the agency could face a charge. daily fine of $536.

On Friday, the WSDOT said it would not comply with the city’s order.

Their response came in a strongly worded joint statement with the Washington State Department of Commerce.

“Ultimately, the safety and well-being of people is our primary concern,” the statement said. “In response to the notice of violation from the city government, the state will take no action during these extreme weather conditions to remove the cooling shelter.”

The statement goes on to say that the state has repeatedly called on city administrators to engage and find constructive solutions to ensure basic public health and safety standards are met, and to find more shelter. safe and long-term housing options for those camping on WSDOT property.

On Monday afternoon, a WSDOT spokesperson said that to his knowledge, the agency had not received any fines from the city. The mayor’s office did not respond to a request for comment Friday and Monday afternoon. In a statement to KHQ, Mayor Nadine Woodward pushed back against the idea that the city hasn’t helped the camp.

“We are required to follow the law and this may conflict with the actions of organizations providing aid, but we are open and willing to find viable and legal solutions that meet the needs of the individuals in the camp,” the official said. communicated.

There were about 10 people using the cooling shelter on Monday morning. The excessive heat warning was originally scheduled to end on Sunday, but over the weekend the National Weather Service extended it to Monday evening. Temperatures peaked at around 105 degrees over the weekend and are expected to reach a high of 99 degrees on Monday.

A man named Rick, who is homeless and asked that his last name not be included, was using the cooling shelter for the first time on Monday morning. He had heard the news of the order to lower the tent and wanted to come and check for himself. It provides welcome relief from the heat, he says.

“It helps,” Rick said, “I don’t know why they would want to take it down.”

The cooling shelter was built last Wednesday by volunteers from Jewels Helping Hands, a non-profit organization that organizes food and other assistance for the camp. Like Camp Hope itself, the tent is unlicensed and technically illegal. But when the shelter was under construction earlier this week, the WSDOT said it would do nothing to stop it because it didn’t want people to suffer or risk death.

The city has extended the hours of public libraries and asked people to use them as cooling centers, but the closest to Camp Hope is nearly a mile away. Julie Garcia, executive director of Jewels Helping Hands, said library shelters are inadequate because many residents are afraid to leave their tents unattended, and others have pets or mobility issues that prevent them from walking. make the trip.