Madeline Field barely remembers her first swim meet, an intrasquad meet during her first week of kindergarten at the local YMCA in suburban Chicago. “I know I’ve been disqualified in everything I’ve swum except for one event,” she laughs, “but other than that I don’t remember any details.”

Luckily for Field, a student at the Buccino Leadership Institute and a member of the Seton Hall swimming and diving team, there would be plenty more competitions to come. After swimming in elementary, middle and high school, she made the decision to join Seton Hall’s women’s swimming and diving team with a definite plan: to graduate in diplomacy and economics, get his 4-year certificate at the Buccino Leadership Institute. , and experience all that Big East Athletics had to offer.

Less than two years into his academic career, Field finds himself leading an interdisciplinary team of his peers in the Institute’s leadership development experience. Field is the creator of Pirates Play, a free athletic leadership camp for inner-city elementary school students. The camp, she explains, is special in that it’s entirely “run by Seton Hall athletics and leadership students.”

The inspiration for this ambitious project came from a combination of Field’s experience as a swimmer, the outreach she had done with local elementary schools in high school, and time spent as a camper at Camp Kesem. Northwestern, a week-long summer camp staffed entirely by the university. students for children affected by a parent’s cancer.

She cites her experience at Camp Kesem as the most crucial, recalling that she “admired my [camp] advisers, many of whom were the same age as me now. I thought they were the coolest, nicest people I’ve ever met. These vivid memories of his advisors’ support are proof that, in Field’s eyes, middle schoolers can truly change lives. “As Seton Hall students, we have much more of an impact than we could imagine. It’s time to exploit that.”

However, when it came to pitching the idea in front of his peers, Field was wary. “It was a well thought out idea,” she said, pausing for a moment, but “I almost didn’t go for it.” 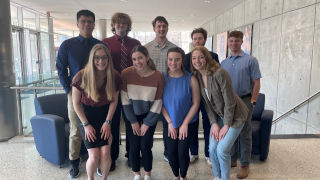 During their second year, Institute students have the opportunity to lead their own interdisciplinary teams in the spring semester. Although executive director Bryan Price encouraged students to come forward, Field feared presenting his idea to an audience of more than seventy peers. “Public speaking is not exactly my forte,” she acknowledges, “but with the encouragement I received from many of my friends at the Institute and from my cohort director, Dean Elizabeth Halpin, I decided to make it happen.”

Fellow Buccino students voted her idea into the top seven, and as the semester began, she was quickly able to draft her peers into a live draft. These choices, she explains, formed the fantastic team that worked together to bring her idea to fruition.

The team faced several daunting challenges early in their process. The biggest challenges were the university’s restrictions on admitting children to campus. This forced the team to get creative. After consulting with faculty, they contacted more than a dozen off-campus organizations to find a location for their project. They eventually found an opportunity with East Orange’s Department of Recreation and Cultural Affairs, which agreed to offer Pirates Play to around 40 children in grades three through five this fall.

While Field was relieved to find a partner (“the most suspenseful part is over,” she jokes), the team ran into budget constraints. “There are so many costs to run a camp like this that we didn’t fully consider at the start,” she says, listing mandatory background checks, team transportation to and from off campus, swimsuits and healthy snacks. for attendees. While the team will continue to fundraise on campus and promote their cause on instagramthey are also looking for sports equipment and financial assistance.

Nearly 16 years after that first swim meet, Field is well aware of the positive impact sport can have on young people. And she knows the positive influence a student can bring to an impressionable youth. “Pirates Play,” she says, “can go far beyond the scope of athletics.” With the help of the Seton Hall community, she is confident that this potential can be realized.