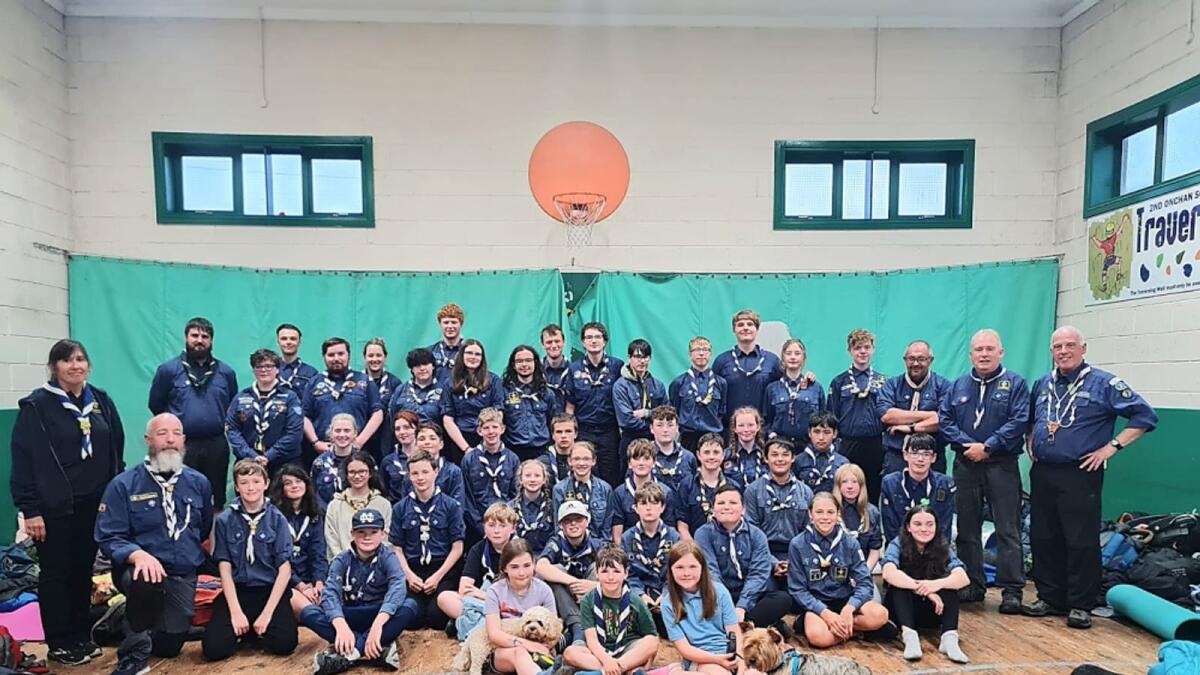 Athlone’s 2nd Westmeath Scout Group recently returned from the Isle of Man after an annual ten-day camp at Crossags Lane campsite, Ramsey, a 45-minute drive from the capital, Douglas. It was a return visit from Athlone Scouts to the island after a very active camp there in 2016.

The camp involved 38 Scouts and 12 Scouters camping at a remote campsite 1 km from the town of Ramsey. It took four vehicles and trailers to move the camping gear to the campsite, but with an experienced group of scouts and patrol leaders, the tents were up and the food cooked in no time.

The challenge for the Venture Scouts (ages 15-17) was to walk as much of the Millennium Way as possible. The Millennium Way is a 90km walking route that descends along the backbone of the island through its highest point Snaefel, down to Douglas and up the west coast through Peel. The Venture Scouts and their leaders, Keith, Paraic, Caoimhe and Carmel, took on the task with relish, camping overnight in single-person dome tents and cooking for themselves in remote locations. The weather was glorious and morale high throughout the challenge and the adventurers returned after three days away delighted with their experience. The Venture Scouts also spent a day at The Venture Center outdoor education facility where they costeering and kayaking.

Scouts (12-15) also hiked, walking from Glen Mona to one side of Snaefel, around Slieau Lhean and Slieau Ouyr and up to Laxley. There was also a visit to the Venture Center where the scouts went kayaking, shooting, rock climbing and abseiling.

Much of the camp was spent cooking for themselves on patrols, swimming and bowling, quizzing on the city map, and maintaining their patrol areas. A particular navigational challenge followed lessons in map reading, compass and step counting. Patrols marched to Albert Tower as a navigational challenge, approximately 2 km through forest and along many tracks and had to pinpoint their position on the map at the request of the chiefs.

There was a day trip to Douglas to visit the Manx Museum and catch up on some much-needed retail therapy, with pizzas and cokes on the boardwalk probably being the highlight of the day.

Back in Ireland, the Scouts had the opportunity to stay at the Den of 2nd Onchan Scout Group on the outskirts of Douglas and had to get up at 4am in order to catch the very early ferry to Dublin the next morning.

The Scout Group would like to thank all the leaders, Keith Tuohy, Trevor and Noelle Lee, Carmel Lough, Caoimhe Nally, Caoimhe Manion, Paraic O’Nuailain, Sean Mimnagh, Corey Egan, Katie White, Emmett Arrigan, Eoin McCarthy and Karen McGee for their time and all their hard work on the camp. A special thank you to all the Scouts and Venture Scouts, I hope the camp exceeded your expectations and a special thanks also to Steve White, Group Leader of the 2nd Onchan Scout Group for their warm welcome and use of their hideout.