At the Dallas homeless camp, the trash and gun debate misses the voices of those who live here 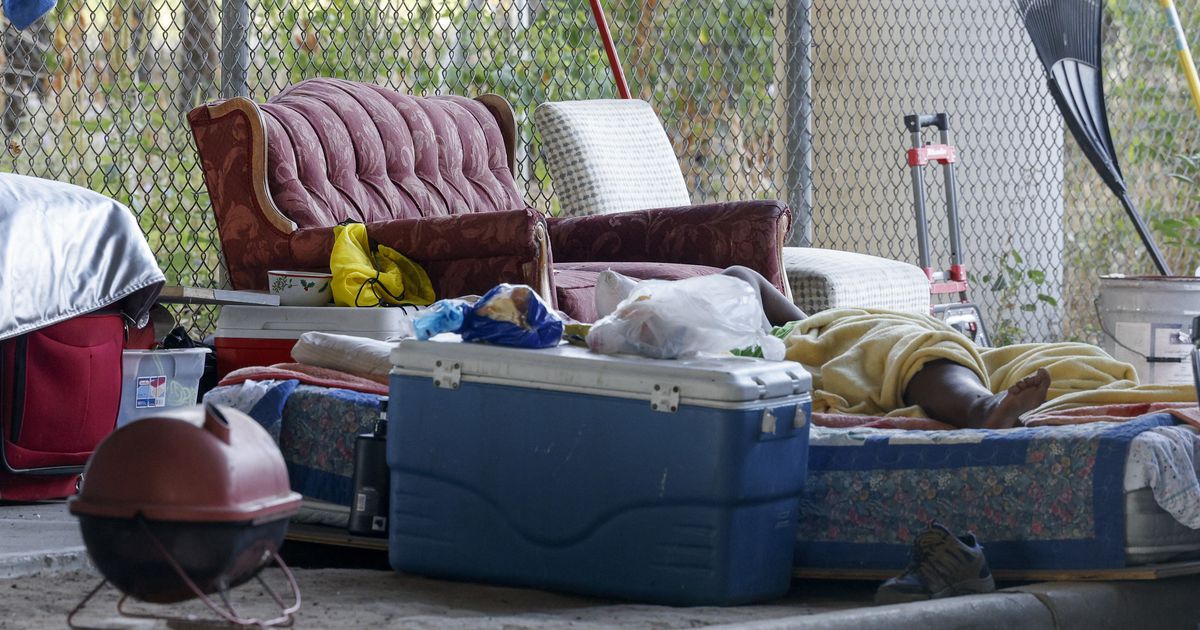 One of the women whose house I visited in South Dallas on Saturday morning seemed to love vintage decor as much as I do. Her Queen Anne-style sofa and the antique star-shaped comforter on her bed look a lot like the ones in my house.

In the rapidly disappearing shadow of Interstate 45, I listened to what homeless residents of this patch of Coombs Street, a mile southeast of downtown, had to say after a recent confrontation between activists and city staff over the long-standing encampment.

“People don’t understand how difficult it is,” said a 70-year-old veteran with the kindest brown eyes. “We are like them. We are ordinary people but homeless and jerked off.

The city maintains that its only intention on July 22 was to transport the waste that had accumulated in recent months under the highway, where about 50 people live.

Social justice activists, who have documented recent dismantling of other Dallas encampments, did not believe the story. These young people – and those they are defending – underscore the history of mayoral failures when it comes to truth.

The official announcement of the action planned by the city did not help matters. Included in the brief warning was this line, in italics: “Please remove all personal effects to protect your property.”

Given the brutal bulldozer earlier that week from the Parnell-Gould Streets encampment, a 10-minute walk west, those who call Coombs home feared their entire lives were about to be thrown away.

What unfolded on that hot Friday morning was a potentially volatile confrontation that must have been unnerving for everyone. At least four of the attorneys showed up with guns — a troubling legal action in this open state — to greet city workers and the six armed marshals who accompanied them.

The city crew left without carrying any of the debris they had hoped to remove.

In the midst of this latest controversy over trash and guns, I fear we have forgotten the people at the center, the vulnerable homeless people whose dignity and very humanity are routinely overlooked.

“Anyone trying to help is in a difficult position,” Joli Robinson, CEO of Metro Dallas Homeless Alliance, told me as we spoke about the confrontation.

“Demands seem to conflict, resources are too scarce,” she said. “But we have to continue to keep homeless people at the centre.”

This is intense emotional labor for both city workers and social justice activists. Even after just one morning at camp, I left with a heavy load of grief and frustration.

My interviews also led me to believe that both sides are trying to work in the best interest of the homeless – if only they could come to terms.

With the city under pressure to close encampments — even with overcrowded shelters, rising eviction rates and non-existent affordable housing — cooperation and restraint have never been more important.

People who live on Coombs Street and adjacent fields are expressing confusion, despair and a sense of being punished.

More recently, fearing what the city clean-up might mean, they temporarily moved their property to empty adjacent land, only to be told by Dallas Area Rapid Transit, which owns the property, that it was off-limits as well. Back below deck they went.

Lewis, the only name he wanted to use, took down his tent and packed up his things when he received notice from the city. “Homeless Solutions came out and told us they would leave us alone, but they walked back on that word when those notices came in,” he said.

The Dallas native, who said he tried for five months to get his veterans benefit checks restarted, lit up at the mention of permanent housing.

“It’s good here, but sometimes you have someone who’s not really together and it makes me doubt that I’m safe,” he said.

Opposite Lewis Square, a middle-aged woman watched dejectedly as her husband helped volunteers clear the couple’s tent in order to relocate them.

“It’s hard not to feel like the city was doing it on purpose when people are so hot and miserable,” the man told me. “They come when no one is looking.”

The soft-spoken man, who wouldn’t give his name, said he lost his job during the COVID cutbacks and the couple had been living under Interstate 45 for more than a year.

Sonya Jones-Adams is a lifelong camper and skeptical of everything she hears. She would like a safer space, but for now she plans to stretch “my food stamps to buy enough ice cream to stay safe in the heat.”

Everyone I spoke to – residents and their advocates – ended our conversation by thanking me for coming to hear their perspective.

In the long term, the best hope for the homeless is Dallas’ Real Time Rapid Rehousing effort, a two-year, $72 million project to house 2,700 people by October 2023.

Christine Crossley, director of the Office of Homeless Solutions, would prefer that any encampment closure be associated with the four to six weeks of work needed to secure housing for those who qualify, in partnership with the Metro Dallas Homeless Alliance and others. agencies.

In the case of the Parnell-Gould camp, Crossley said, the private landlord demanded immediate closure, which left no time to move people through the rapid relocation process.

“We’re not very agile yet, although we hope to be in the future,” Crossley said.

The city’s plan for the Coombs Street community was – at least for now – an entirely different action. “It was never meant to take people away,” Crossley said.

When the city returns to remove the debris, Crossley said, it plans for a more collaborative approach. “We’re still going to go out there and clean up, but we don’t want people having to move their tents,” she said.

She said this new strategy — working alongside camp residents — was what staff intended to do on July 22 in the Coombs area. But because the written review didn’t reflect that, “therein lies the problem.”.

The city will develop wording for a new notice so people understand what’s going on and “don’t be traumatized that their property is at risk,” Crossley said.

Among the advocates I spoke with Saturday morning, who were busy moving anyone who wanted to move, was Julia Paramo, a member of two local justice movements, Say It With Your Chest and Sunrise Movement Dallas.

She admitted to feeling exhausted by all that happened at this single site, which is home to many senior citizens and people with disabilities.

Yet her patience, and that of other activists, has been remarkable, even when confronted by camp residents with questions they could not answer and accusations they should not have been faced with. addressed.

“They just need to let it out,” she told me. “Some are ready to move to a safer place. Some feel lied to. There is a lot of confusion and they have been told so many different things.

The tension between city hall and social justice activists is not surprising given that they look at each side from very different angles and rarely with the same information, said Robinson, CEO of the Metro Dallas Homeless Alliance.

“Basically, I really believe that everyone wants the best for our homeless neighbors,” she said. “The challenge is how to get there.”