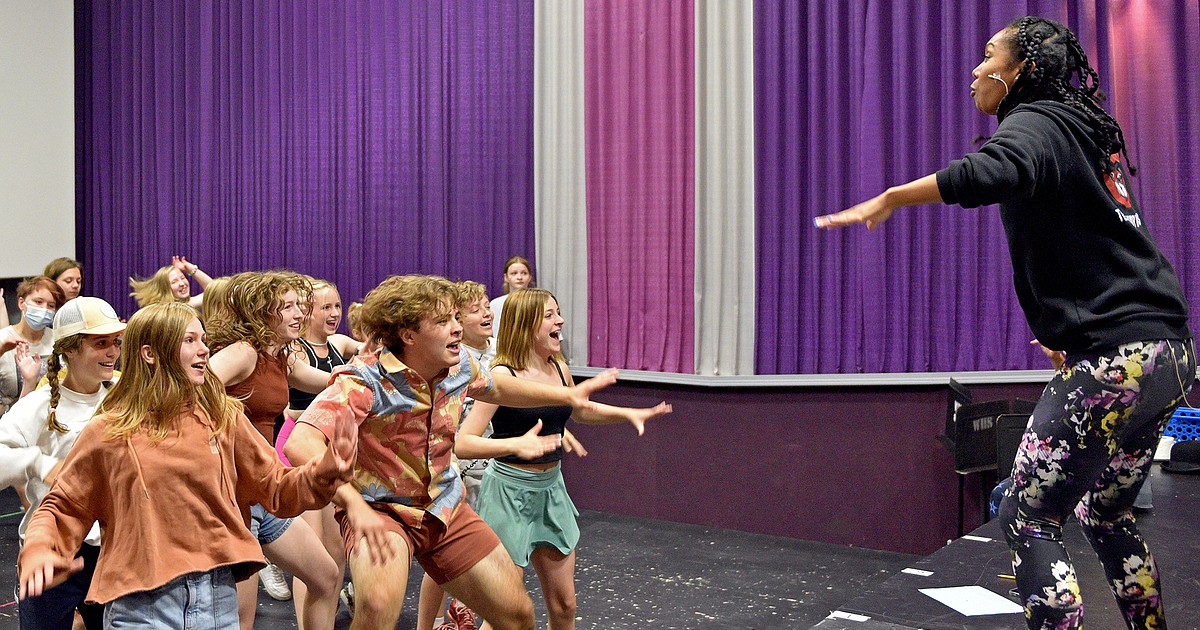 Upon entering the lobby of the Alpine Theater Project, it’s easy to forget that not so long ago the building housed the Whitefish Mountain Cinema.

Posters of upcoming Hollywood releases have been replaced with signs advertising Broadway classics like “The Full Monty”, “Rent” and “Annie”. In place of popcorn and soda dispensers are piles of stage props and lighting equipment. The clatter of bass that came from movie trailers and blockbusters playing in auditoriums was replaced by the tinkling of improvised piano numbers and children shouting-singing with all their might.

It was the changes made by the Alpine Theater Project that were on full display July 18 as the organization held its Broadway summer boot camp. During rehearsals, the thrilling urgency of a fast approaching deadline for an upcoming performance and culmination of summer work was palpable.

The troupe is made up, on the one hand, of veteran performers, their resumes including professional experience both on stage and on screen. On the other, 60 children of varying ages, talents and experiences.

“One of the great things about Montana is that they have, and always have had, such a robust cultural landscape,” Walrath said. “This community has such a deep passion for the arts, it’s just about giving people the resources they need to connect with theater and help them find what excites them.”

After founding the program with his wife Betsi Morrison and their business partner, David Ackroyd, in 2004, Walwrath said the idea for a summer program came in 2017. According to Walrath, it was all Morrison’s idea .

“Because of our experience in theater, we’ve made all these connections in our life with all these amazing, top-notch performers, so she would go out and bring all these people that she’s worked with in the past and ask them if they would like to teach for us over the summer when my job would just be to figure out how we were going to pay for it,” Walrath said with a laugh.

ONE OF these instructors is Lauren Lim Jackson, an Orange County, California-based teacher and actor who has worked in performance art for over 30 years. Her credits include several roles in Broadway mainstays such as “Finian’s Rainbow”, “Pretty Women: The Musical”, “Chicago” and “Big Fish”. She has also done film and television, making her first screen performance at just 6 years old.

“A lot of these kids seem like the old lady and the teacher here to me,” Jackson said, “but really, when you’re working with kids, it’s hard not to feel like they sometimes have more to teach you than the others all around.

Jackson says young students are best taught because of their lack of self-awareness.

“When you’re a teacher and a performer, over time sometimes you feel the need to play it safe and you forget to put yourself forward,” she said. “Kids just don’t have that in them. They want to play, laugh, move and be silly, but they also want to listen and follow instructions.

Lander Busse, a senior at Flathead High School, is one of the ATP’s most loyal campers.

“I’ve been going here for four years now and so I’ve been here a bit from the start,” Busse said. “It was really exciting to see how the program started with just a handful of kids like me and to watch it get bigger and bigger every year.”

Busse said that although he has always leaned more towards singing, he enjoys lessons that focus on a mix of skills and disciplines that are imperative for performers to master.

“I’ve done a lot of plays now and I’m trying to get better at dancing,” Busse said. “It’s just a matter of wanting to improve in everything and be the best performer you can be.”

The program aims to have students and instructors work on cross-disciplinary performances like singing, dancing, acting, and even drumming, with the ultimate goal of presenting two separate live shows over multiple nights in late summer. : a show performed by the students and one produced by the teachers.

Busse says that while his priority remains working with the program to improve himself as a singer and actor, attending the summer program also helps him set the stage for his future.

“I’m starting my college search here soon so obviously I’ve learned to trust a lot of the instructors here and I look to them as mentors and I’ve constantly asked for their advice and Luke and Betsi have been very good at help me. building my future brick by brick,” he said.

When asked what advice he would give young artists who are new to the program about what they can expect to accomplish with a summer on the program, Busse was quick to respond.

“Everything,” he said. “You can do anything and everything here if you put your mind to it and work with the teachers and your classmates. You can make a career here from just one summer.

IN AN ideal world, there would be no shortage of organizations like the Alpine Theater Project that reach out to students from all walks of life and provide them with the resources they need to immerse themselves in the culture of the performing arts, a said Jackson.

“I think awareness is incredibly important and we can always do more to break down that barrier between what students are passionate about and what their financial circumstances allow them to do,” Jackson said. “I think it’s vital for children and for the theater community in general. It makes students happy to be here.

Walrath says that although the ATP manages multiple revenue streams, including ticket sales and advertising, the bulk of the program’s funding ultimately comes from donors.

“Over 60% of our revenue comes from contribution revenue,” Walrath said. “So being the revenue manager means that if there’s a kid who can’t afford the program or if one of our productions starts going over budget, it’s my job to go talk to our donors and to understand how we’re going to pay for it.

One of the aspects of the program that Walrath is most excited about is its flexibility in paying students.

“Our policy is ‘no student turned away,'” Walrath said. “Whether for financial or other reasons.”